St. Peter’s Roman Catholic Church is home to a spectral prayer warrior and helper for the living. 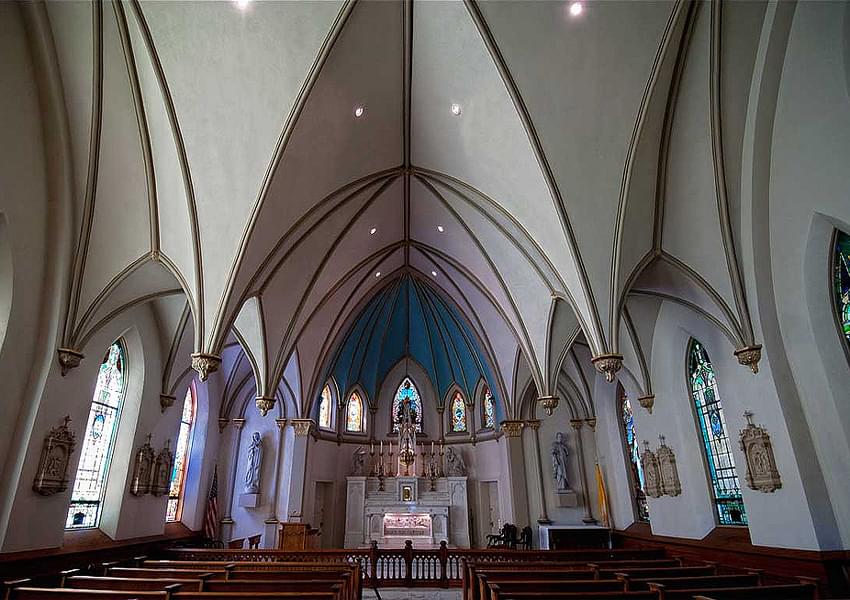 St Peter’s Roman Catholic Church is a mission church, supported by Saint James Catholic Church in Charles Town. It serves the tourists and Harpers Ferry business community, and others who live here because of the Armory or National Park employment.

St. Peter’s Roman Catholic Church as it looks today is the 1896 renovation that completely changed the church’s early pseudo-Gothic Revival architecture into a much improved, greatly admired Victorian Gothic Chapel based on St Francis Roman Catholic Church in Staunton, Va. that was the work of the architects that did the 1896 remodeling. Architects Thomas J Collins and his Son came through brilliantly for the town of Harpers Ferry

St. Peter’s Roman Catholic Church is gorgeous, with its handsome granite walls that have windows trimmed with pink sandstone. The bell tower and steeple were rebuilt at the southeast side of the church.

“An apse at the rear replaced a brick lean-to-attached to the 1830 church.”

This beautiful church can be seen by all down below and is an inspiring sight. This church has long been a beloved landmark that survived the hell fire of war. Tourists don’t mind making their way up Church St. to experience this beautiful Catholic Church that has had so much history.

“Docents in period dress conduct tours and answer questions during the peak tourist season, from May to November. St. Peter’s is an important site for concerts and events during Olde Tyme Christmas in Harpers Ferry the first two weekends in December.“ 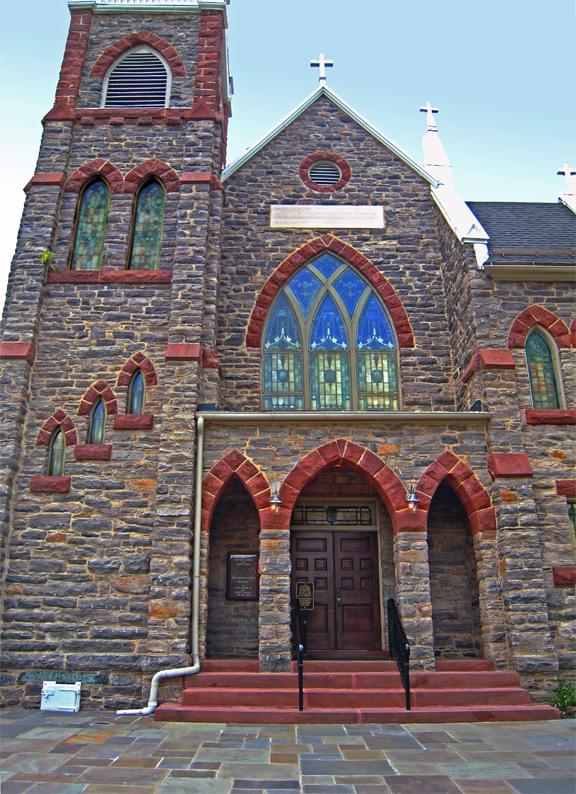 By 1830, Harpers Ferry was a bustling city of industry and commerce, which meant that many Irish Catholic workers had found jobs here. Probably some of the soldiers as well who was stationed at the Federal Armory located in Harpers Ferry were also Catholic.

A local Catholic Bishop from a large town nearby bought the land from the Wagner family, who had inherited the land from Robert Harper. Robert Harper had designated in his will that a Catholic Church should be built here. Perhaps the Wagoners had dutifully approached the Bishop with this idea of a chapel.

Robert Harper may have willed some money to help pay for it. The dimensions of this church were 39 ft by 75 ft., with its bell tower and steeple in the middle. Construction began in 1831, with the help of the local Catholics and others with the skills that were needed.

In 1833, this lovely brick, one large room Gothic Revival church with a steeple and bell tower was dedicated as a mission outreach church to serve all the people of Catholic faith in Harpers Ferry. It also could be a beacon of life for all the unchurched.

In 1853, a stone rectory was built behind St Peters Roman Catholic Church to house the priests close to church. The string of Catholic priests who served the people of Harpers Ferry at St. Peter’s Roman Catholic Church, were dedicated to their mission here. Father Michael Costello was the priest here from 1857-1867. After the 1859, short-lived, violent take-over by John Brown and his motley crew of 21 men,and the subsequent bloody retaking of the Armory by the Federal Government troops, Father Costello saw the writing on the wall, and knew that Harpers Ferry would be a coveted military prize because of its strategic location by two rivers; the Potomac and the Shenandoah.

What drove home the point was the funeral service for a brave young man, Mr. Hanley who was among 6 other citizens who were killed by Brown’s invading forces. Father Costello had to think of something to protect this church.

To try to protect the church building so it could be a place of safe refuge, Father Costello, who originally may have come from the British Isles, pretended that St. Peter’s Catholic Church was a British property by flying a British flag that he happened to have in his possession. His plan worked beautifully.

During the fourteen battles that took place here, the Artillery from both sides: the Union and the Confederacy were careful not to aim their shells at St. Peter’s Catholic Church. The War of 1812 wasn’t that long ago at this point, and memories were fresh. Perhaps, they also enjoyed the beauty of the church building, and used the excuse that it was British property not to shell it.

During the entire Civil War, Father Costello served all the people, Catholic and non-Catholic; before, during and after each bloody event. Father Costello devoted himself to service with his constant prayers for the suffering population, for mercy and fairness by the occupying forces, and by opening up the church as a hospital for both wounded defenders and the wounded populace.

He got first-hand experience of the suffering when he moved down to live in lower Harpers Ferry after the John Brown incident. He gave last rights to the dying, and officiated at burials. He bravely held services and offered all the sacraments.

The neighboring Episcopal Church just down the way on the same Church Street was destroyed by shelling, and was never rebuilt. By the end of the Civil War, there was heavy damage done to the buildings and a boatload of residents suffered and died.

The church building was blessed to reach the stage of being a real fixer-upper opportunity. In 1896, funds were available to construct big changes to the church’s outside structure that needed some TLC. The church was torn apart and this new, magnificent building was constructed on the old foundation. The architecture was changed “from its earlier Pseudo-Gothic appearance to the then popular post-Civil War Neo-Gothic style.“

Throughout the coming years, St. Peter’s Roman Catholic Church became a beloved institution in Harpers Ferry. It held its own as an independent congregation, until more and more people moved to across the river; depleting its funds.

So, St. James Roman Catholic Church in Charles Town offered to support this historic Roman Catholic Church as a mission church, mainly serving tourists, offering an 11:00 Sunday Mass, marriages where one of the happy couple is a Catholic in good standing, and the small group of Catholics and other Christians who still live in Harpers Ferry. The St Peter’s Roman Catholic Church APPARENTLY still has a spectral prayer warrior, as well as other spirits who were served here in their hour of need sometimes

People of faith who put their heart and soul into their service to the Lord sometimes want to continue to serve the living even in spirit form.

Though St. Peter’s Roman Catholic Church has living Priests to serve the congregation, the spirit of Father Costello is still serving here even in spirit form.

Buildings that were Civil War Hospitals often have spirits of soldiers who died there; not ready to accept their death just yet, especially if their strategy to survive is shattered.

A young soldier who was mortally wounded was laying in front of St. Peter’s Roman Catholic Church, thinking that if only he could hang on until it was his turn to see the doctor caring for patients inside the church, he would be saved. Unfortunately, just as the nurses were carrying him in, he died.

People who die from injuries, murder, disease, wounds from war, often like to hang around their favorite place in this world, or attach to the land where they died upon.

As St Peters Catholic Church has long been a beacon of light sitting on top of a hill, it may attract many spirits not ready to go to the spirit world just yet; especially those killed here during the many Civil War battles. 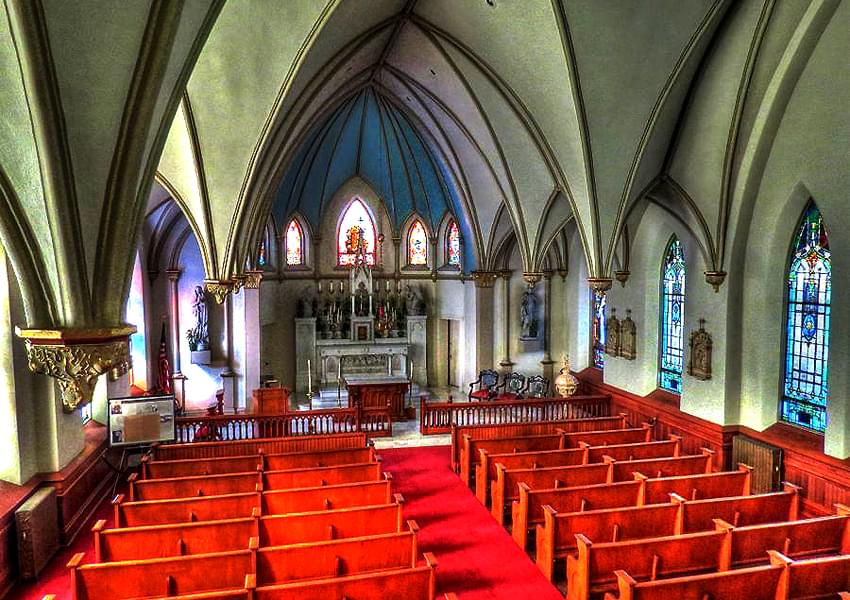 Described as being an older gentleman, dressed in robes.

This spirit has been seen going down the path beside the church, then turning and walking through the wall as though it were a door, probably because this spirit sees the old church that had a door there.

This spirit has been seeming praying at the altar, for the people of Harpers Ferry.

This spirit also moves around the inside of the church, going about his perceived business.

Entity of a Civil War Soldier

His spirit is seen standing on the front steps.

Visitors and probably church-goers hear a disembodied voice declare:”Thank God I am saved.”

Yes Indeed! The spirit of Father Michael Costello, the soldier who died as he was brought inside and perhaps others who came here as badly wounded casualties who died here but are unknown are also here, enjoying the beautiful church and are still Father Costello’s spectral faithful.

The manifestations reported above have been recalled by a boatload of witnesses throughout the years following the end of the Civil War. It is listed as being haunted on several websites and the Ghost Tours always include it on their tours.

St. Peter’s Roman Catholic Church in Harpers Ferry is located up on a hill on the corner of Church St. and Jefferson Rock Trail. This property has a beautiful view of the Shenandoah Valley and the spot where the two rivers converge together.