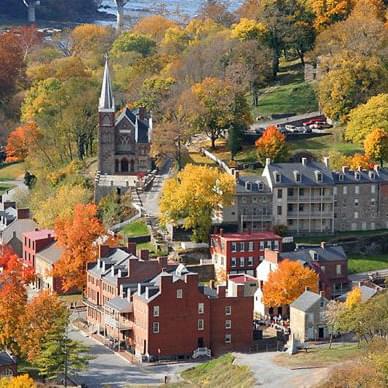 Harpers Ferry National Park is similar to Virginia’s Colonial Williamsburg, as it portrays a slice of history.

The city’s reconstructed, restored pre Civil War buildings, townhouses and weapons factories in small places give the visitor the feeling that the residents and workers just walked out for a moment.

While not many people actually live here now, there are many businesses located in the structures here that would please visitors to this National Park; including children’s activities, the original St. Peter’s Catholic Church, house and building museums, places to eat, ghost tours and recreational opportunities.

There are Harpers Ferry house rentals that attract tourists who want to spend some time here, drinking up history.

This chosen location for this city was both a source of blessing and source of tragedy. The location was a perfect spot to grow business and other uses because it was near a big waterway, making it a profitable location for a river port city. By the 1800s, Harpers Ferry was a bustling port city because of businesses and industries established here.

It started with dreams of an entrepreneur willing to invest in this large property near the river.

Robert Harper was a builder and millwright by trade. He was hired by a group of Quakers in 1747 to build their meeting house in the Shenandoah Valley. After finishing this job, he traveled to the location of land, called “the hole” where two mighty rivers converge: the Potomac and Shenandoah.

Wow! He was impressed by the water power of the strong currents of the Potomac. He immediately saw the possibilities of the land near it for not only a town to grow and be profitable but a great place to reap the profits from traveling settlers going west. 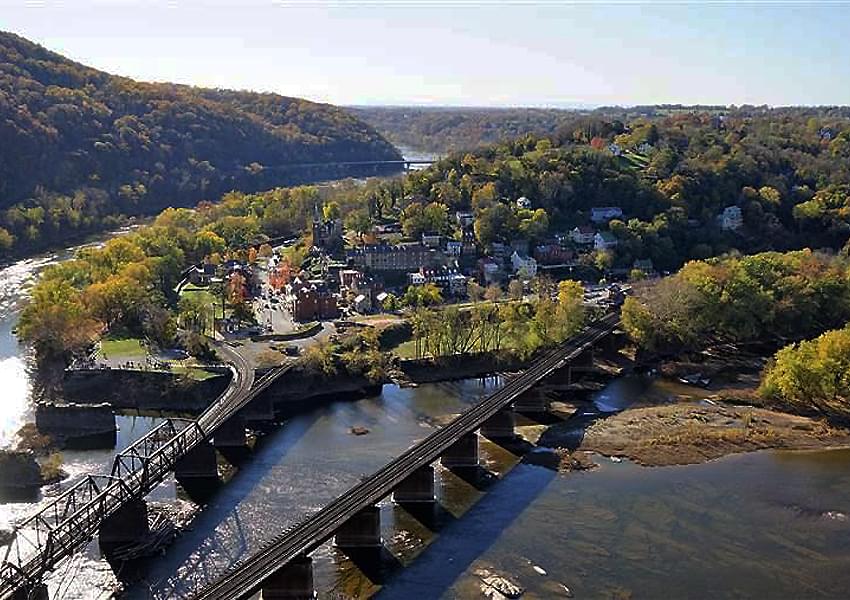 In 1751, Roberts Harper sought and received a patent for the 125 acres next to this spot. In 1761, Robert Harper built a ferry operation that ran boats across the river. . The ferry was very profitable, taking settlers across the river. Harpers Ferry became the starting point for settlers traveling to the soil-rich lands of the Shenandoah Valley and the lands beyond.

Businesses set up shop here to serve all the travelers. Just two years later, in 1763, “the Virginia General Assembly established the town of “Shenandoah Falls at Mr. Harper’s Ferry.”

By 1775, Robert Harper and family wanted a grander home. So Harper built a house up on a hill that had a great view of St. Peter’s Church that was on the next hill over. Their forever home was finished in 1782, both both Robert and his wife died before they could move inside. Uh oh.

Mr Harper’s dream of founding a bustling city of industry that grew in prosperity was brought to fruition by his descendants, the Wagners because of an unseen event.

George Washington in 1794 thought that Harpers Ferry would be a great place to establish a Federal Arsenal storage area, being that it would be easy to send ammunition, guns, etc up or down the rivers when needed.

In 1796, the Federal Government helped Harpers Ferry become this center of industry by buying land from the Wagners. They retained two parcels of property: the “Six-Acre Reservation” which was the actual town and the ¾-acre “Ferry Lot Reservation” “at the confluence of the Potomac and Shenandoah rivers.”

After the Federal Government bought the land from the Wagners, George Washington established the first arsenal, that brought in gun makers, small workshops which helped to spurn the growth of industry in this town, now called .Harper’s Ferry.

During the 1800s, Harpers Ferry did indeed become what Mr. Harper had dreamed. As the Armory’s work force became a growing presence, both the ferry and the town became the heart of commerce.

Unfortunately, tragedies also were caused by this location, which is lower than the river. Any structures built near a river, sooner or later will be flooded, especially before the building of Levees. Predictably, the rivers overflowed, flooding the town of Harpers Ferry, causing death by drowning.

Strong currents of the river water drowned the hapless swimmer. The water in the rivers can be treacherous, and people throughout its history unfortunately drowned in its waters. Because people didn’t realize that Typhoid and Cholera came from drinking river water contaminated by human waste, many Cholera epidemics swept through town, causing death and sorrow. Unfortunately, the location chosen for Harpers Ferry was impossible to defend against attack, and sooner or later Harpers Ferry would be invaded. Uh Oh.

“Surrounded on all sides by the steep rises of Bolivar Heights, Maryland Heights, and Loudoun Heights, successful defense of the town required that the more than one-thousand foot rises towering over Harpers Ferry be posted with artillery. Nestled far below the mountains, the low elevation of the town itself, which led soldiers posted there during the Civil War to describe it as a “godforsaken, stinking hole,” left Harpers Ferry open to attack without much hope for defense.”

Real Mayhem and violent deaths that traumatized the citizenry started on October 16th 1859, when radical abolitionist John Brown and his raiding party attacked the town of Harpers Ferry, killing whomever got in the way to briefly take the Federal Arsenal storage area.

John Brown planned to hold this strategic location as a staging area to lead the slave army that was sure to show up and help Brown’s forces. The capture of Harper’s Ferry was “to be the first stage in an elaborate plan to establish an independent stronghold of freed slaves in the mountains of Maryland and Virginia.”

This victory was short lived. I don’t know what John Brown was thinking. The Federal Government would not let this take-over stand. If Brown’s men could easily take the town, what would well-trained Marines do, who were known to kill people and break things?

Two days later, on October 18th, a company of U.S. Marines, led by Colonel Robert E. Lee (1808-70) and Lieutenant J. E. B. Stuart (1833-64), overran Brown and his followers. Brown was wounded and captured, while ten of his men were killed, including two of his sons.” John Brown was tried in a court of law, charged with treason and was found guilty, and hung later that same year, in 1859. 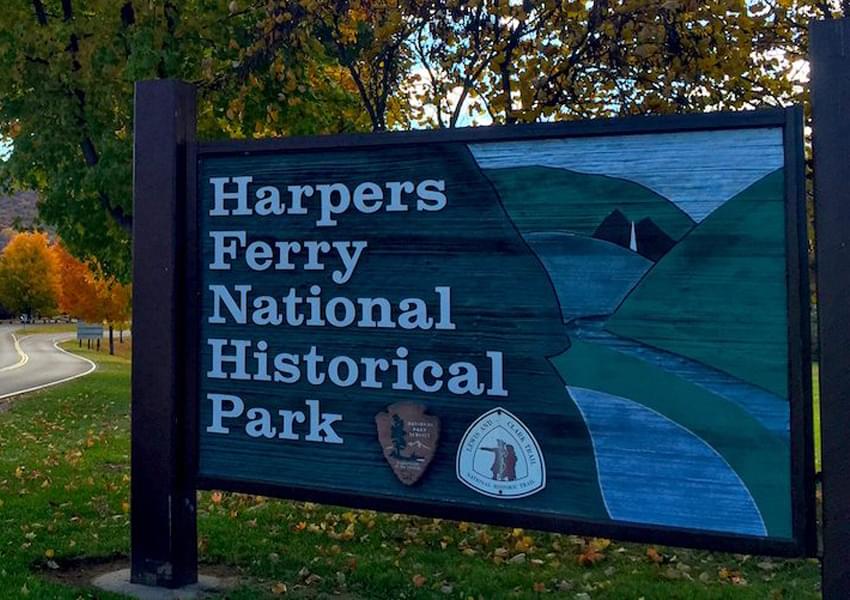 The population of Harpers Ferry once again had to dodge bullets, trying not to get in the way, but wound up being collateral damage. More Civil War battles were to come. Between 1862 and 1865, Harpers Ferry was fought over fourteen times, as both the Union and the Confederacy wanted this advantageous location.

The Armory and all of its buildings were completely destroyed during the 14 battles that occurred here and was never rebuilt.

I imagine that most of the town was rubble or damaged by the end of the Civil War, except for St. Peter’s Catholic Church thanks to the cleverness of the priest at the time. People started over, rebuilt their buildings overtime, and carried on with life. The Harper House also escaped destruction by its location; up on a hill.

In the listed haunted places in Harpers Ferry National Park, there are hauntings caused by drowning, sudden and violent death, trigger objects, not willing to share, not willing to leave this world, dedication to service, dying in or beside a structure, and not willing to accept death when they had so much to do; still wanting to achieve their goals.

The historic Harpers Ferry National Park can be found off of Highway 340, in the eastern panhandle of West Virginia, where the Potomac River and the Shenandoah River intersect and join together. Three state boarders come together at Harpers Ferry: Virginia, Maryland and West Virginia.