The Village of Harpers Ferry is a major hot spot because of many deadly Civil War battles.

Spirits, including an infamous rabble rouser, haunt places all over town! 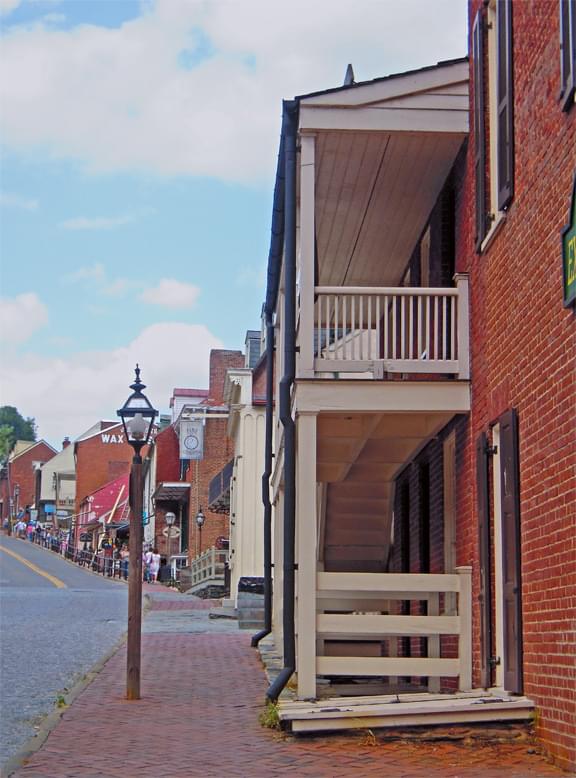 The village of Harpers Ferry has a long history of bloody violence and natural disasters, earning the name of being “a child of tragedy.”

As a result, it is thought to be one of the most haunted places in North America.

The real violent events started in 1859, when John Brown thought that Harpers Ferry would be a perfect place to set up his headquarters.

In many of the excellent hideouts he could store weapons and troops to defeat the slave owners, and be on his way to establish a slave-free place for runaway slaves.

However, when the federal forces arrived to wipe out Brown and his army, many people living there were killed in the process.

Because of its location, Harpers Ferry was in the middle of many battles during the Civil War, which also resulted in many horrible deaths of some men, but mostly women and children.

Those who survived the battles, suffered and sometimes died in cholera epidemics and periodic flooding.

Many restless spirits walk the streets of Harpers Ferry, and wander in and out of the buildings and historic homes.

A Hostile Male Spirit, and a Female Spirit with Little Girl

A Georgetown federal employee met a woman apparition on the staircase, dressed in a long, gray, hooded dress, who was holding the hand of an eight year old child. Both ignored the employee and vanished.

This same employee met a glaring, glowering but good looking man, dressed in a brocade vest, wearing a top hat and holding a cane, who was standing at the head of the servant’s stairway, at the end of the hall.

As the male spirit was emitting hostile vibes, she ran to the balcony door, where she felt an invisible hand pushing her in the back, causing her to stumble. She turned around and he vanished.

A planner from Denver staying at this same guest house saw the same good-looking, glaring man in the brocade vest, at the end of the hall, and the woman dressed in the long, gray-hooded dress, with the little girl. All vanished before the planner’s eyes.

At another historic house, located in the center of Harpers Ferry, Mr. C and his kids lived on the top floor.

For months on and off, Mr. C. was awakened by a little child’s pitiful, heart-wrenching cry, which seemed to come from his bedroom closet.

Mr. C., while doing the dishes late at night, saw a glowing white object float out of his closet and move toward his bed before vanishing. After going back to the dishes, a tremendous crash shook the house.

After a thorough inspection, nothing was out of order.

A possible explanation of this haunting can be found in a recently found dairy of a Civil War era woman, which tells the sad tale of a baby’s death caused by a fallen chimney, which happened in the middle of a Civil War battle which was fought at Harpers Ferry.

What Did I Just See?

A researcher was taking a quick nap on the sofa in the front room. He awoke and felt that someone was watching him.

He then saw a man dressed in 19th century work clothes run by his sofa, carrying a dead man.

Both disappeared in the hallway.

A phantom Army, complete with fife and drum sounds, marches down Hight street.

A little drummer boy, who was killed when a Union soldier threw him out of a window, cries for his mom.

Also called the Kennedy Farmhouse, which is a 200 year old restored, log cabin, located 5 miles outside the main town.

Brown and his 21 men slept upstairs in the small attic. Witnesses have heard John Brown’s ghost pace back and forth on the top two floors. Footsteps of a crowd of people can be heard going up the steps.

Sounds of people talking, breathing and snoring have been heard as well. Psychics feel an aura in the attic. One psychic claimed to have made contact with John Brown himself, who was “pleased” with the renovation work done on his old headquarters.

An apparition resembling John Brown himself has been seen walking down the streets of Harpers Ferry, occasionally smiling at a visitor.

He obligingly posed for a picture with some West Virginia tourists, who enthusiastically asked him to join them. When these tourists got their pictures back, there was a blank space where the old man had stood, though everyone else was accounted for.

Spirit of a Young Girl

A young girl, who was burned in a 1830 fire, still screams for help.

Father Costello’s ghost can be seen praying for his congregation up on the hill at Saint Peter’s Church. 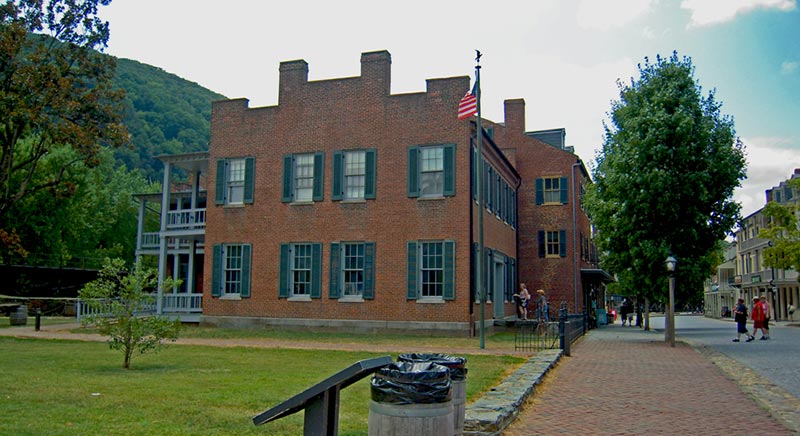 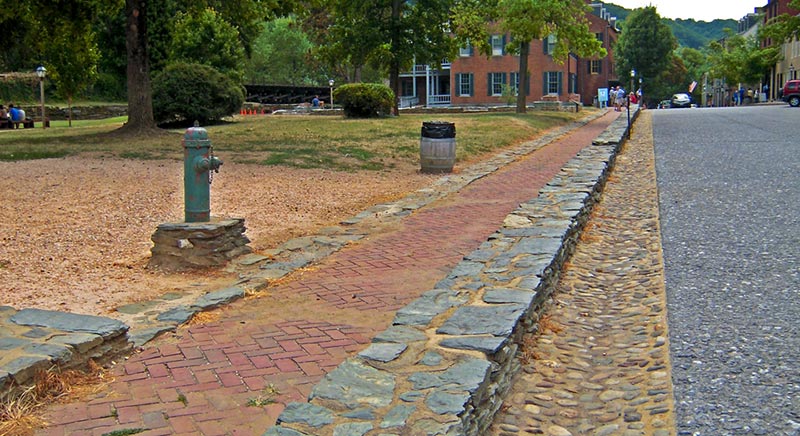 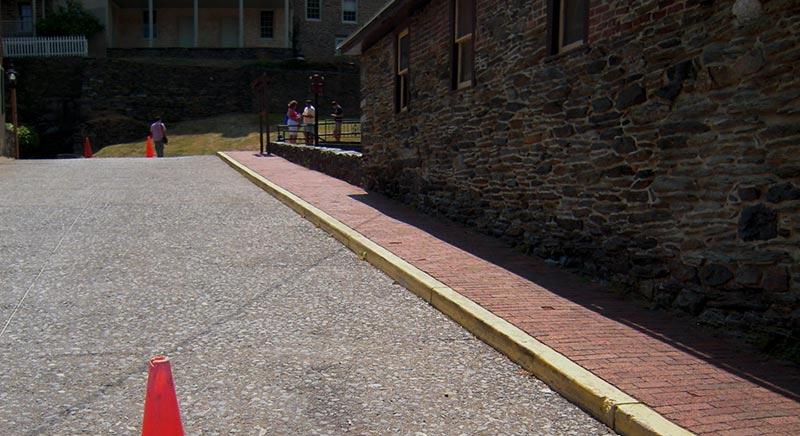 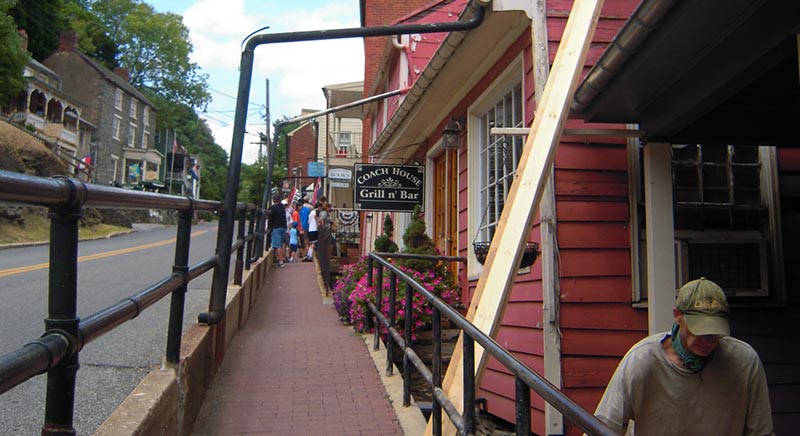 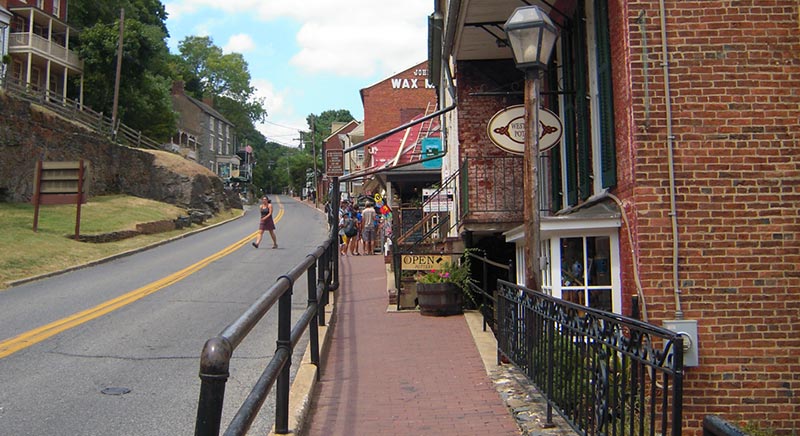 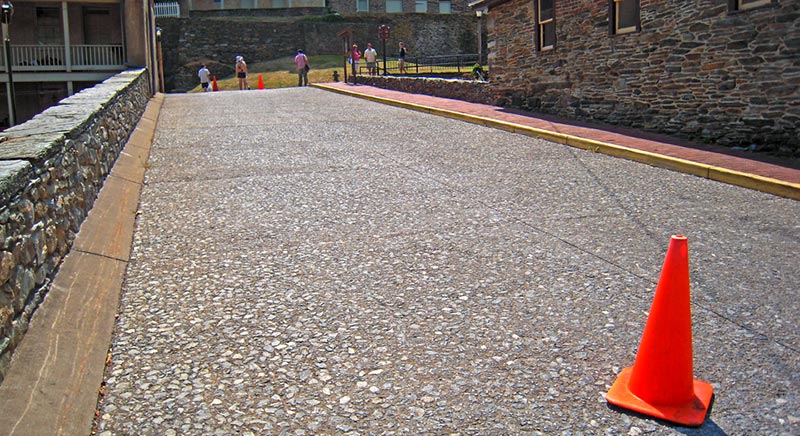 Private ghost tours are given at the park. 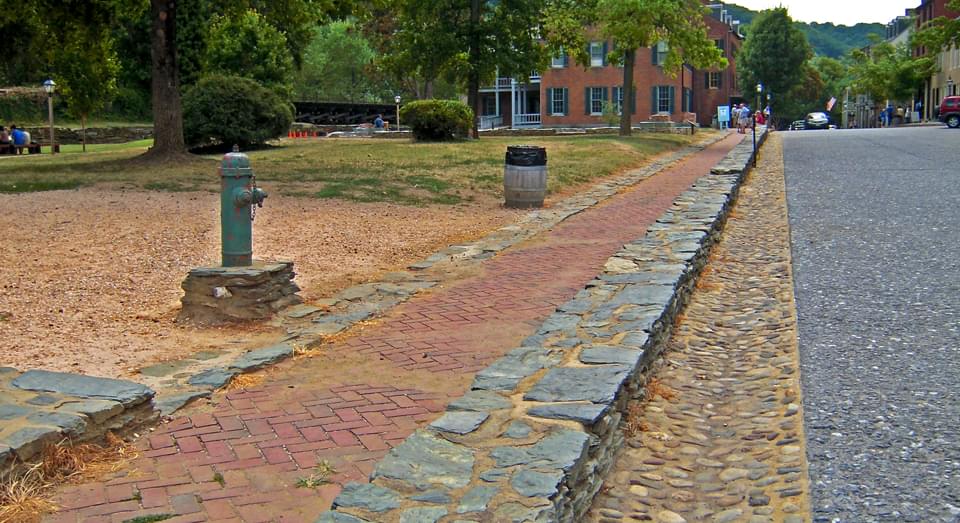 Harpers Ferry is now a National Historic Park, where tourists can go and visit. Park employees, dressed in period clothing, give tours to visitors during the summer months, and on weekends during the Spring and Fall. A tour of the haunted places is given on Friday, Saturday and Sunday evenings.

Harpers Ferry village was built in the Northeast corner of West Virginia, in the Blue Ridge Mountains, with the states of Maryland and Virginia on its boarders. Its founding fathers also thought it was a good idea to situate the village on land near the edge where the Potomac River and the Shenandoah River run together.

Harpers Ferry can be found off U.S. Highway 340, where the Potomac and Shenandoah Rivers meet.