Skip to content
More From Phoenix More From Arizona

Former jailers and prisoners are still lingering at the jail. 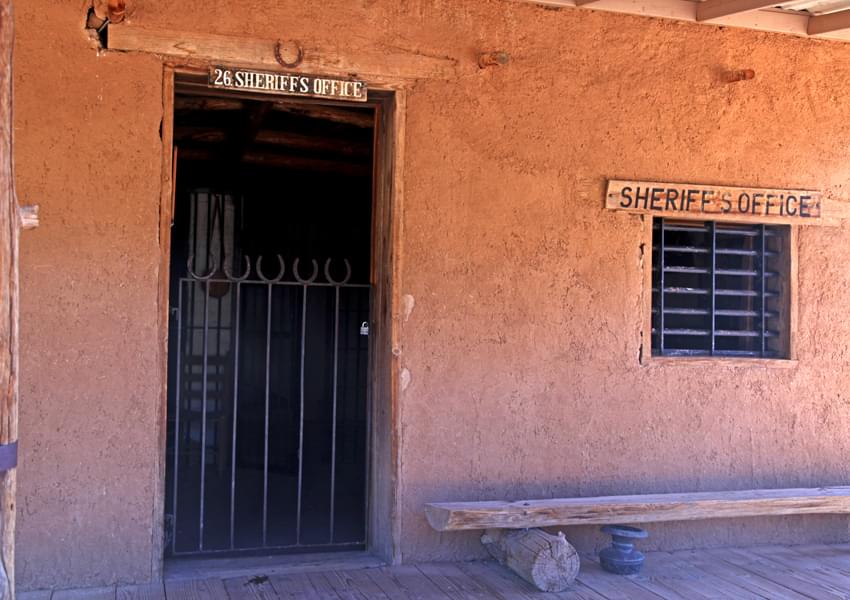 This carefully reconstructed 1881 adobe building is a replica of the original Gia County Courthouse in Globe AZ, that included the Globe Sheriff’s office, a two cell jail for bad ones, and a small space for a make-shift courthouse for the circuit judge who came once a month.

Building materials were ideal for the time, meeting the needs of both law enforcement and the contained guests of the county. The very thick adobe walls are mixed with straw and sand to keep them strong; discouraging break-outs. They kept the heat inside during the winter months, and kept the heat outside during the summer months.

Standing in front of this Sheriff’s Office, there is a wide front porch with a wooden awning. The open front door had a rope across, preventing entrance, but the structure is so small that the visitor can see everything from the front door.

Looking inside, the visitor today can see how they made good use of the inadequate space in this small, rectangular building. The front half of this structure the visitor sees a gun rack, wanted board, shackles and other artifacts hanging on the wall. There is a small table, some chairs and a roll-top desk and chair.

In the back of the structure there are two large cells with 2 sets of bunks per cell (3 tiers to a bunk).This jail was big enough to hold 12 people; size of a large gang, or a rowdy group of hotheads or drunks, or misc. law-breakers and had the flexibility to keep prisoners somewhat separated. 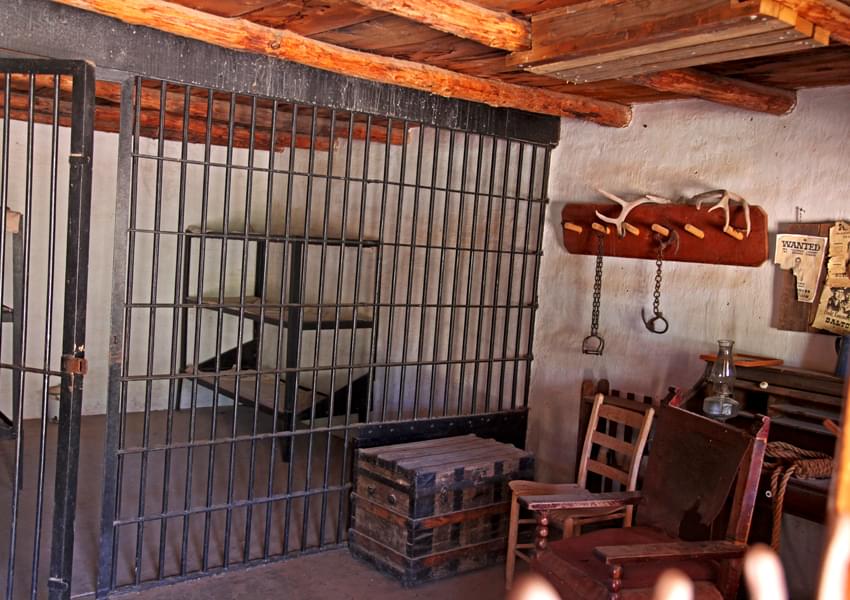 It was called back in the day The Gila County Courthouse; built in 1881 in Globe, Az. It was thought by planners that this structure didn’t have to be very big, possibly because of the small population. This turned out not to be true. Unfortunately, this structure was inadequate to begin with, and a scant three years later, petitions were presented to the Board of Supervisors seeking the construction of an additional story. This second story on this building wasn’t in the stars.

The group of early Sheriffs who worked in this little adobe; The Gila County Courthouse, include: Andrew Halbert, Lindly Orme William Thomas Gray, and John Montgomery.

The crowding problem in the small jail came to a head in 1892, and Sheriff James Murphy had the task of finding more existing jail space. Finally, a new, bigger jail was built to hold law breakers in Globe. The new Gila County Courthouse that was built near the new jail was a much bigger courthouse but wasn’t open for business until 1906. This means that court business still took place in the original, small Gila County Courthouse.

Sheriff John Elliot Walker may have been the last Sheriff to serve in this little structure. His term was from 1905 to 1906. After the sheriff’s office and the court moved out, the little building may have been a home or business for several eras. It didn’t survive as an original building possibly because it was annexed into a bigger building or was torn down. 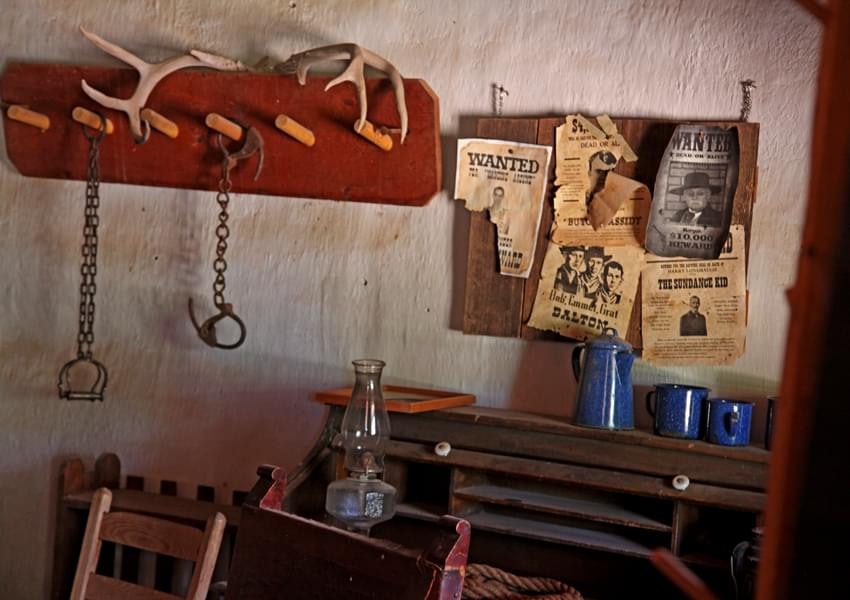 A Maricopa County Supervisor and Sheriff of Maricopa County; John Mummer was the mover and shaker that was responsible for this reconstructed contribution that is now an exhibit in the Pioneer History Village. The details of the inside were gleamed from a glass plate photo of the original 1881 Gila County Courthouse. Old artifacts and furniture were gathered to complete the exhibit.

The finished reconstruction of the 1881 version of The Gila County Courthouse;legal circuit court, Sheriff’s office and jail, was completed with the additions of some authentic artifacts. Sheriff John Mummer also got ahold of the original, old Maricopa County jail bars and beds in 1971, making this exhibit very authentic indeed! It makes a fine exhibit for the Pioneer Living History Village. 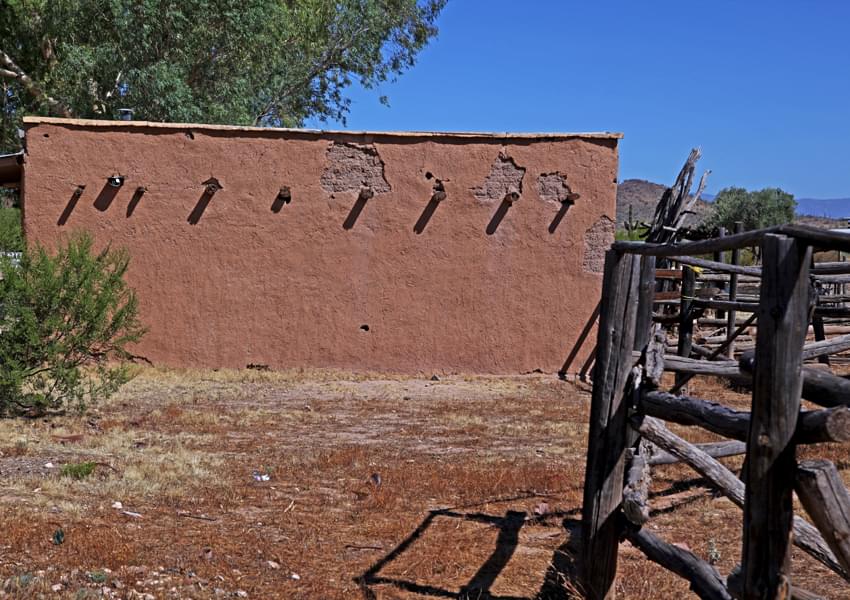 Antique furniture and artifacts that are brought into a building can bring spirits along who are attached to these historic gems.

The authentic period artifacts and jail furniture have brought some spirits into this reconstructed jail.

People who die because of the circumstances they are in, sometimes are frustrated, can’t accept their death and look for help they never got while alive.

At least one spectral prisoner and one Jailer have made themselves known to the living.

Spirits of past guards and jailers who took their responsibilities seriously while alive, can’t let go and may stay in this world to look after the spectral prisoners still here in this world as well; especially if they were killed on the job, or failed in some way in their job performance.

As there are still spirits in jail here, there is a spirit of a jailer or sheriff here as well, still looking after them and supervising visitors and the Village staff as well.

Spirits are attached to the beds and or bars, or the shackles or anything else hanging on the wall. The roller desk may also be popular with a spirit. Disembodied Voices have been heard coming from the structure.

Spirit of an Unhappy Prisoner

A cold spot or two were felt in the cells. Is still asking for medical help that may have saved his life. He could’ve avoided dying in jail. Actual EVPs backed this up. 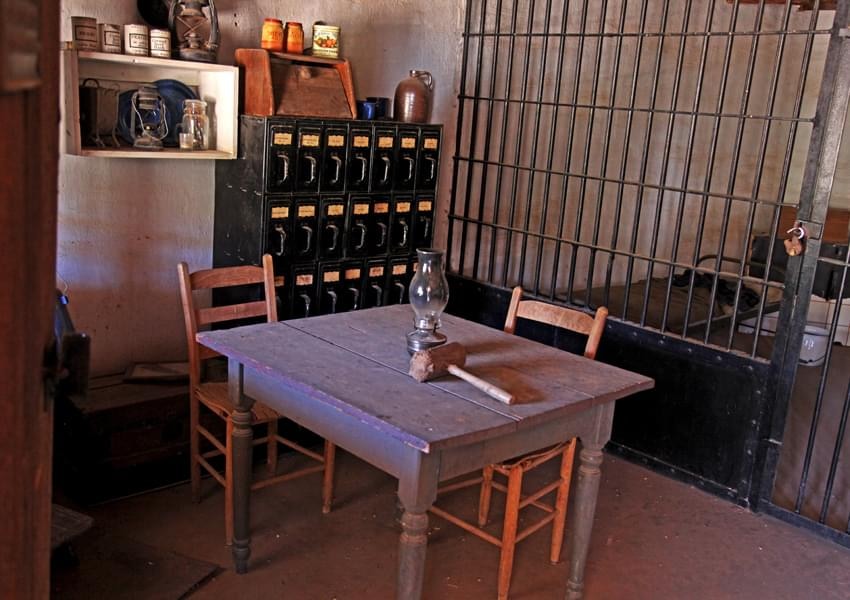 Apparently he is still on the job. This spirit is professional and has his standards! He isn’t afraid to express his opinion in no uncertain terms:

He didn’t approve of cards being part of the exhibit. Playing cards that were left on the table were thrown all over the office. Cards could be associated with gambling and trouble, not a busy, professional law enforcement structure.

Asked some paranormal investigators to stay back from the cells and stay out of the cells as well. A cold spot or two were felt in the cells. 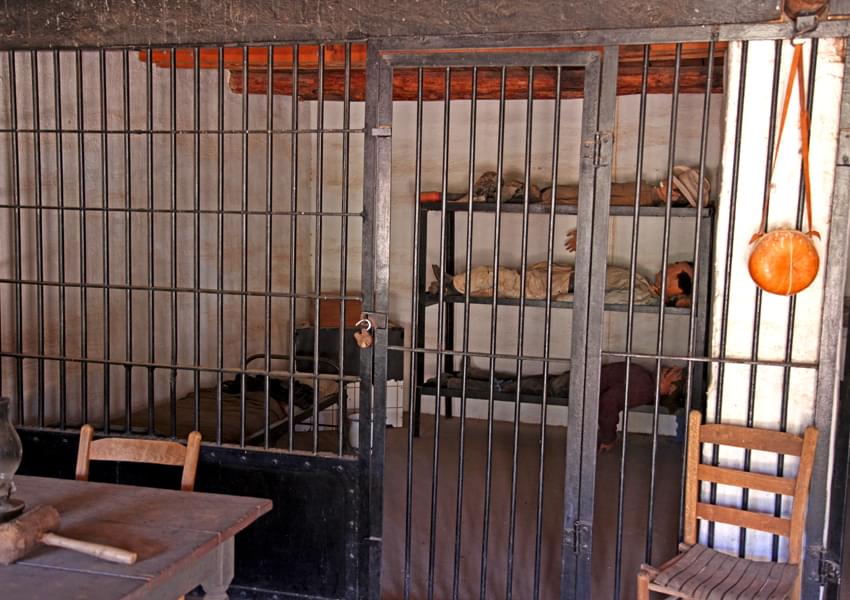 For Pioneer Living History as a whole:

Mediums have come in and experienced spirit auras, and have described some of the spectral residents Staff members have had many personal experiences, especially the groundskeepers. Sometimes they are the recipients of little jokes by the spirits. At one building, all the doors closed at the same time. Visitors occasionally see spirits going about their business.

Paranormal Investigators, mainly, the Phoenix Arizona Paranormal Investigators have held several tours here and have caught a lot of hard evidence, due to their ability and investigation skills. These successful tours also are a fundraiser for the Pioneer Living History Village. as tickets to the public are available. Most spirits here at Pioneer Living History Museum also find them entertaining. For Reconstructed 1881 Sheriff’s office, circuit court and Jail specifically

Staff needs to watch their p’s and q’s, and not violate the high standards of the jailer and or sheriff.

The hard evidence gathered inside this building suggests that the spirits here don’t find the investigations entertaining. The spirit of the unhappy prisoner is still in jail and is earnestly looking for help to stop the illness that killed him, and the jailer finds the living annoying; a hindrance to his work. He must appreciate that the public can’t enter but only look from the doorway.

The Reconstructed Sheriff’s Office and Jail, can be found on the far north west side of Pioneer Living History Village.

Haunts in Phoenix Haunts in Arizona