Still is a spectral jail for some, causing paranormal activity.

The escape of John Dillinger has caused restlessness.

In 1882 The Sheriff’s House was built to serve a succession of elected sheriffs for 76 years until 1958. It is a two story brick building designed in second empire Victorian style, complete with deeply sloping mansard roofs. Thanks to the efforts of the Sheriff’s House Foundation of Indiana, the building is currently being refurbished and renovated. The Northwest Indiana Building and Construction Trades Council has been generous in this effort by donating workers and materials for needed plastering, carpentry, electrical, roofing and other areas needing a facelift.

The large two story brick jail with its own tall chimney, is located in the back of the building. It isn’t in very good shape inside, but it too is having work done so it can be used for storage but still won’t be part of the tour for the public. 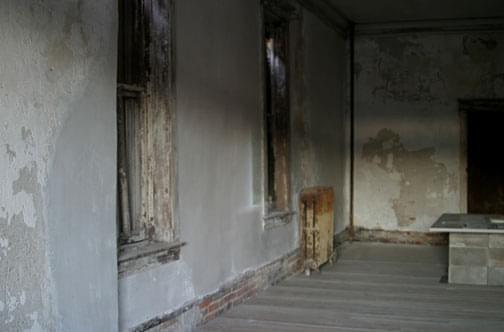 Tom and I visited this building on our road trip of 2007. At sunset when we arrived, the house and jail was much larger, spookier and imposing than the pictures on their web site led me to believe. While it was closed, we peaked into the large front window, and saw the plaster work which was being restored.

Yikes! Tom’s pictures do catch the real aura and character of this fine Victorian building, and the spookiness of the place comes through loud and clear. 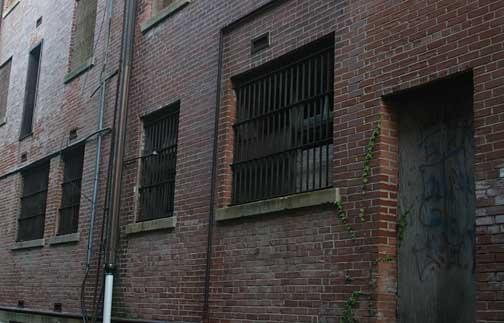 Indiana 1926, a large two story brick jail building was added on to the Sheriff’s House, making it more convenient to keep an eye on people in custody; bringing work home from the office, so to speak. Thus the back part of the Sheriff’s House was called the Lake County Jail.

This Lake County Jail became known as the place from which John Dillinger made his fantastic escape in 1934. After John Dillinger was caught by authorities in Tucson, Arizona, on January 30th, 1934, Lake County was first in line to drag him into court for a trial, because he was involved in a bank robbery where innocent people were killed.

Bank robber/gangster John Dillinger knew he was headed for death if he remained in the hands of the state. While in custody in this jail, he used the materials at hand to help him temporarily foil the wheels of justice. Using jail-issued razor blades, John carved a gun from a wooden washboard, staining it with black shoe polish. He then threatened his guards with the fake gun, helped himself to a real automatic, and took hostages temporarily to ensure his escape to Illinois. All this was for nothing as it didn’t get him very far. The following Sunday after his bold escape, John Dillinger was killed by Federal officers outside the Biograph Theater in Chicago. 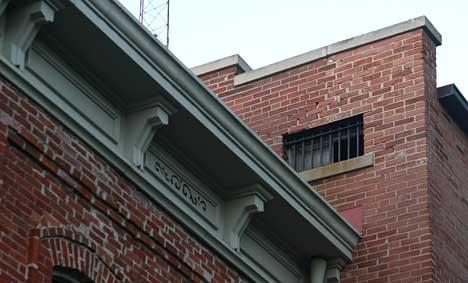 Though this jail was closed since the 1970s, An entity or two is stuck.

Perhaps a prisoner is still being held here, though in reality was freed long ago from this period of time of being in custody in this jail. Personal reports from the living and photos taken of a jail window and inside the building point to this being’s apparition.

Or perhaps, the entity is of a guard or a law officer who was fooled by Dillinger’s fake gun.

Cell doors have the habit of opening and closing by themselves.

Some unseen entity seems to be trying the bars of cells, looking for a loose one because the living have heard the bars rattling in cells with no living person in sight.

As is the case in other haunted places, the unseen entity is fascinated with electricity and likes to turn the lights on and off.

Voices and footsteps have been heard in here, when no one living is anywhere near the jail area.

Pictures taken by ghost hunters from Northwest Indiana Ghost Trackers during their April 6th, 2000 paranormal investigation point to the fact that this jail is haunted by one or two entities. When blown up, some pictures clearly show an apparition standing by one of the jail’s barred windows, looking outside to the camera, and an apparition standing in the jail area in a picture taken inside the building itself.

In the picture below, taken by Tom, I wonder if that is an orb over the table? 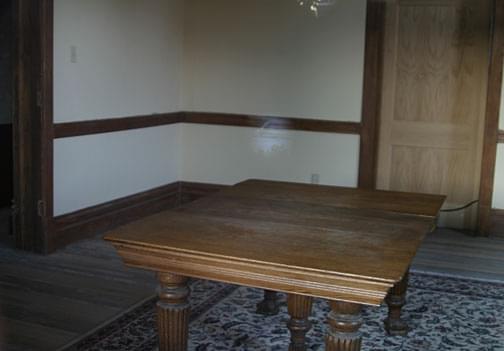 The Crown Point Sheriff’s House and Jail can be found just off the main town square within walking distance of the Courthouse. The town of Crown Point was established in the Northwest corner of Indiana, about 35 miles southeast of Chicago and only 15 miles from the Lake Michigan shoreline.

In June of 2007, the house was closed, due to renovations being done in the rooms of the house itself, but now completed, the building has been reopened. 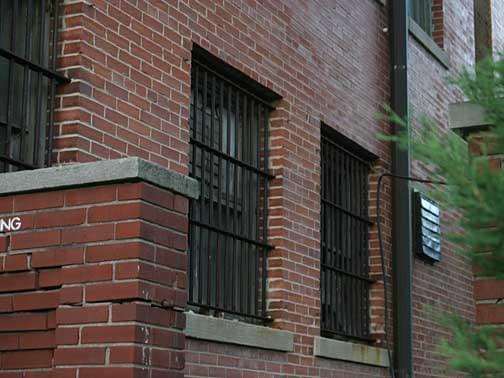 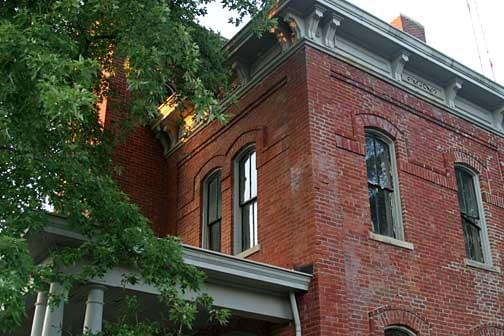 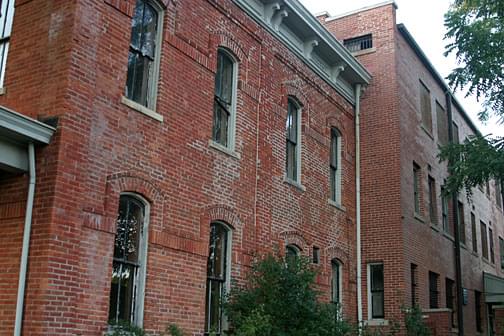 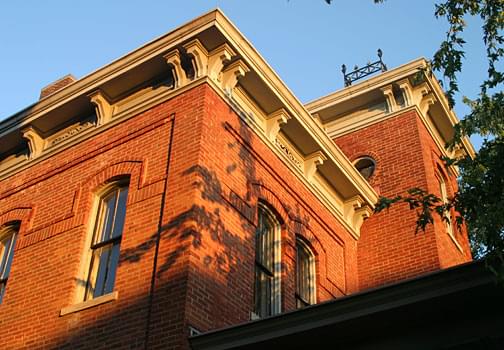