This former place of misery is still a hell for tormented former inmates.

A full, sometimes scary paranormal sports package has been experienced. 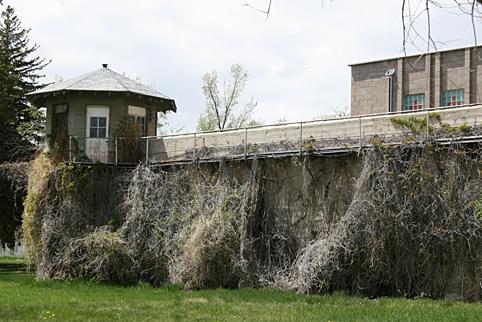 This castle-like granite stone fortress was designed by the same architects who were responsible for Alcatraz. Land was bought from the railroad in 1888, and construction was started, funded by the state of Wyoming. The prison wasn’t finished and ready for business until 1901, because of the need for more money. It was costing more than what was budgeted.

It became home to the roughest lot of inmates, and others convicted of lesser crimes, who were transferred from the prison in Laramie. Almost right away, the prison became overcrowded, as the criminal justice system was cranked up a notch to clean out the criminals doing their killings and misdeeds in Wyoming towns, with the goal of civilizing Wyoming. In 1904, an additional 34 cells were built onto the west end of the cell house to relieve overcrowding.

The concept of reform at this time was to break the spirits of hardened criminals and force conformity, with the hope that the criminal would conform to society’s rules. Wyoming Frontier Prison at Rawlins was equipped with 104, dark, cramped cells in its cell house, but with no electricity or running water, and an inadequate heating system. Hot water wasn’t available in the cells until 1978!

In 1906, a dungeon house was finished to house the most difficult, violent inmates to try to punish them into submission, in an effort to improve the prison’s atmosphere and discipline system. While this step of moving the most disturbed men out of the general prison population was a welcomed improvement, much more was needed in keeping control of the inmates, a rowdy and unpredictable lot. 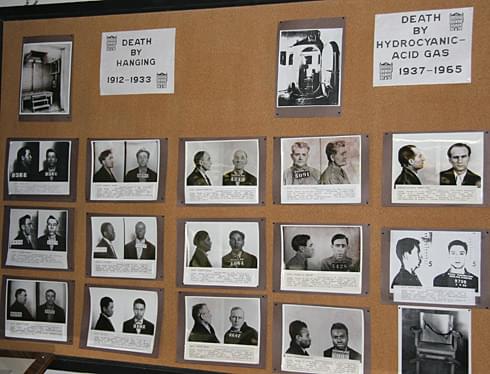 The Wyoming Frontier Prison at Rawlins had woeful security to adequately handle the kind of folks who made up their growing prison population. It was considered too rough for women, and the last woman inmate was transferred in 1909. Women were not segregated from the general male population as they were at the Laramie prison, and perhaps something happened to expedite the exodus of women.

It took awhile to establish the level of maximum security needed to keep its inmates in-house; foiling escapes and stopping some bad behavior and needless killing within its walls and outside as well.

Weapons on occasion were smuggled into the prison: Guard Ed Samuelson was killed by a gun, shot by an inmate, also armed with dynamite, trying to escape in 1907.

Inmates had been escaping, as early as 1903. An escape attempt was foiled in 1911, at the price of a guard’s life. In 1912 alone, thirty prisoners escaped through the wooden stockade and barbed wire on two consecutive days, some of whom killed a Rawlin resident, Charles Stressner.

Finally in 1915, the concrete walls and towers were at last finished which stopped any more mass escape attempts, until 1927, when 7 prisoners escaped on two different occasions.

The inmates throughout the years were kept employed making broomsticks, shirts, and did their part for the WW2 war effort by making the highest quality woolen blankets for the military. The prison was awarded the Navy E award! After the war, inmates made license plates as well.

Throughout the following years up to 1966, new cell blocks and other buildings and additions were eventually added when a need was really evident. In the 1950s, two new cell blocks were built to house 331 inmates. In 1966, Cell Block C was built, having 36 cells for “serious discipline cases.” “The Old Hole” was turned into more classrooms.

Prisoner executions began in 1912 when the death house was finished. 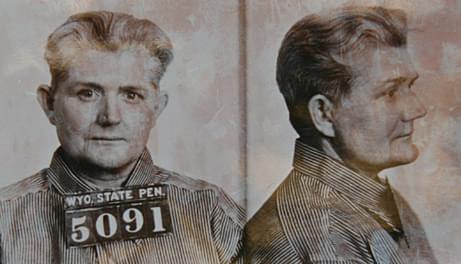 From 1912 – 1933, inmates in the death house were hung on an awful invention, called The Julien Gallows, where condemned prisoners were forced to kill themselves. By stepping onto a trap door, a stream of water was started which eventually opened the trap door, causing the condemned to drop through the trap door. Unfortunately, this do-it-yourself gallows didn’t drop the condemned man far enough to break his neck, and they died a slow death through strangulation. Nine men were hung in his fashion.

What I don’t understand is that the authorities must have known that the condemned prisoners didn’t fall far enough to be properly hung. Why didn’t they fix it? No one seemed to care. YIKES!

Finally, a hydrocyanic acid gas chamber was installed in 1936 to do a more humane job of executing condemned men, and was used for execution, up until 1965.

The prison was closed in 1981, after 80 years of service. It became a museum under the ownership of Old Pen Joint Powers Board, who have done a fine job in its renovation, upkeep, and earning funds through tours and renting the buildings out to groups for various events. 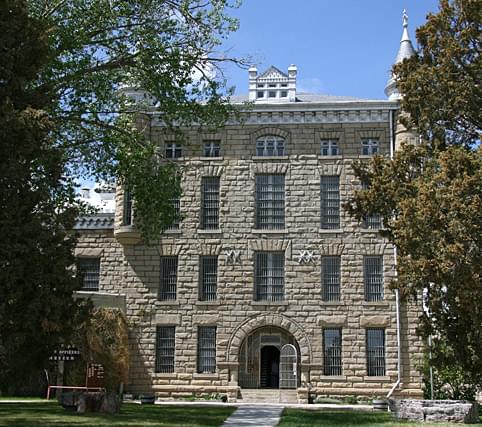 Many prisons are haunted because of the nature of incarceration, and what happens in places of confinement which are filled with tough characters with mean spirits, warped perceptions and bad attitudes. Murders in-house and death by execution also creates restless spirits.

Yikes!!! After studying its history, Wyoming Frontier Prison at Rawlins was a very violent, oppressive prison, which has generated a lot of negative energy, and restless spirits which are still there today.

There are many possible causes for the hauntings experienced in this prison.

The gloomy, depressing atmosphere and being imprisoned in such hard conditions and poor treatment from both inmates and the staff often causes hauntings.

As it is in prisons today, the meaner inmates bullied the more milder inmates, humiliating and terrorizing them. They hadn’t figured out the need to have two types of prisons; Minimum security for lesser criminals and maximum security for the violent folks.

To intimidate the other inmates, the skin from a condemned man who tried to fight his way out of the death house was made into a pair of shoes. His head was given as a present to friend of the warden.

Some prisoners cracked under the pressure and committed suicide by throwing themselves off the upper floors of the cell blocks. 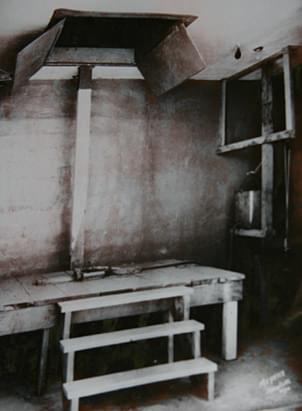 Inmates held in the Dungeon House and Black Hole suffered from the conditions there:

Two inmates even died of the cold, which stopped the prison from using those particular cells until a better heating system could be offered in a newer, improved version of the Dungeon House.

Some were probably mentally ill, and were often filled with rage on the level of insanity.

A guard who worked at tower 9, committed suicide. The stress of work got the better of him.

Activity in the Death House:

Nine men were strangled to death due to the Julien Gallows.

Five men were executed in the gas chamber.

Some prisoners (like inmate James Williams) were killed trying to escape, or killed themselves before being recaptured.

An inmate was lynched by a mob of fellow inmates because he had raped an elderly woman.

Guards were killed by prisoners, over the prison’s long history.

Although they are freed through their deaths, some entities still call the prison home, perhaps afraid to go to the other side, or can’t let go of this world and their old reality.

Apparitions are seen out of the corner of visitor’s eyes.

In various cells throughout the cell blocks, unseen presences are felt and disembodied voices are heard.

Some sensitives have felt an increase of pressure on the chest and a feeling of anxiety as they climbed the steps to the death house.

A reflection of an apparition of a man wearing a brimmed hat was seen in the room where the men were executed by the hanging/strangling contraption.

Also known as The Dungeon House

An angry, crazed presence is said to threaten anyone who dares to enter certain sections. 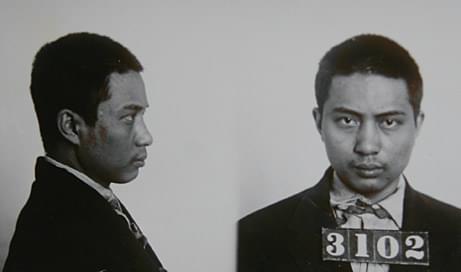 Tour guides and visitors alike are witnesses to the lively paranormal occurrences which take place in various areas of this prison.

The austere looking, stone Wyoming Frontier Prison at Rawlins can be found on a huge piece of property which is on W. Walnut Street which runs between 3rd Street on the east and 7th Street on the west. 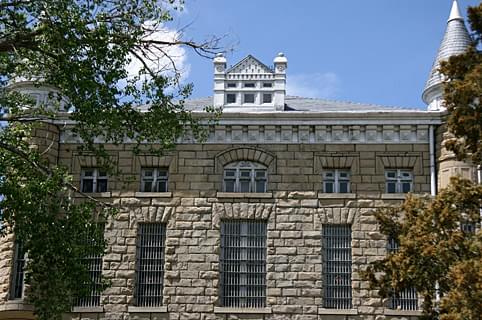