The Captain John Nabb/ Jacobs House has been used by the UVM for a number of things, including the headquarters of a student Catholic Club. Today, The Student Counseling and Testing Center has its headquarters here. The garage was converted to become extra office space. The stable no longer exists.

This 1850 house is a two and a half story, Greek Revival style structure. The front of the original main entrance, called the “western façade”, faces South Williams Street. It has a “gable end orientation.”

The house still has terrific examples inside and outside of Greek Revival elements including “Doric columns, a full entablature, Greek moldings, a wide frieze, and the corners of the house are articulated as engaged columns.”

The common rooms; such as the dining room, the parlor, the study and the library were on the first floor, while the second floor contained the bedrooms.

There are two other phases of construction, due to the reality that properties are often changed to meet the needs of the occupants. The second phase of construction happened between 1880-1892, when “a lower addition” to expand the box-like structure because more room was needed.

During 1920, a third phase was done to create a 1920 garage, to shelter a car from the rough winter weather. 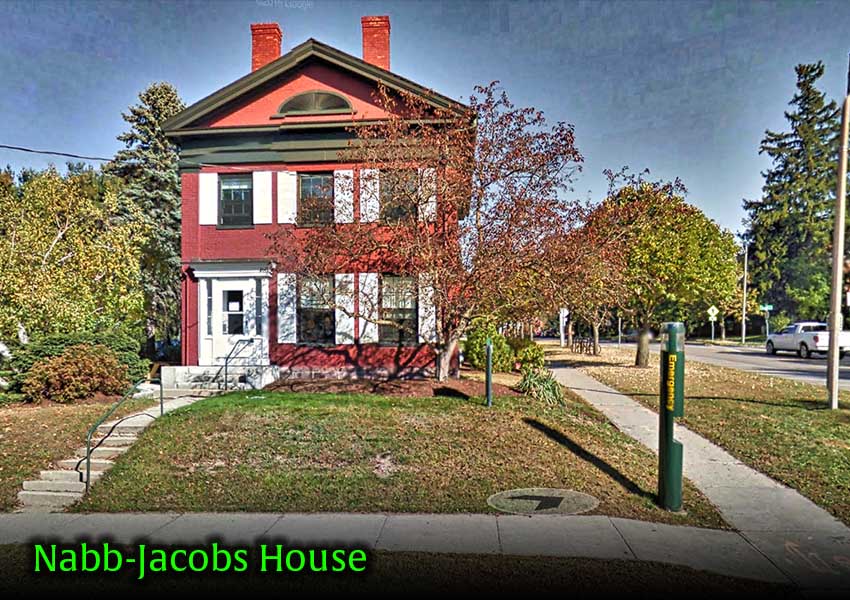 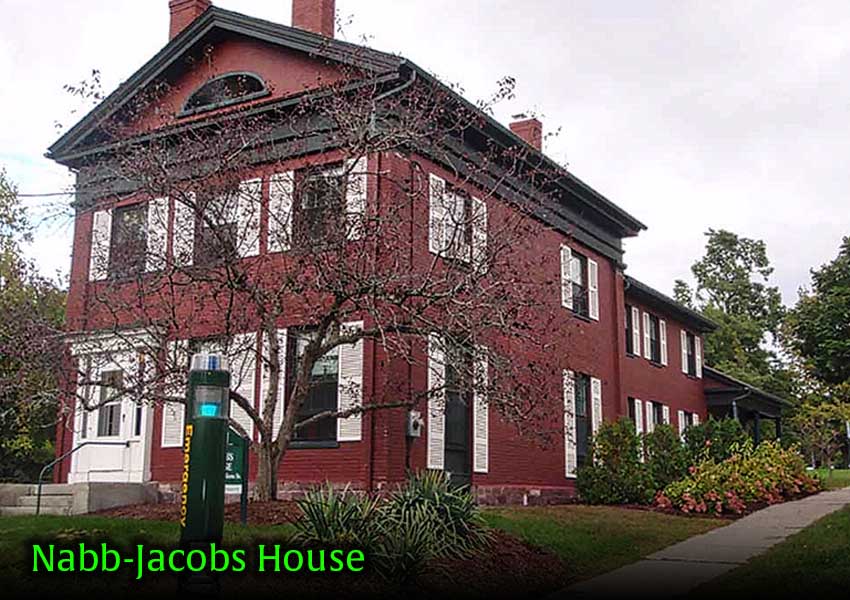 This structure was built in 1850 by Captain John J Jones for his dear friend, Captain John Nabb, though Captain Jones still owned the property. Captain Nabb lived there very happily until he died twenty-seven years later, in 1877. It was his dream home, courtesy of Captain John Jones.

After Captain John Nabb passed on, Captain John Jones, a devout Episcopalian, deeded the house to the Trustees of the Fund for the Support of the Bishop of the Episcopal Church in Vermont. The next resident was the Reverend William H.A. Bissell, the second Episcopal Bishop of Vermont, who started to enjoy this home in 1879. it may have been during the time of Rev. Bissell when the second addition was added, in 1890 or even earlier.

In 1920, Professor Eldridge Jacobs, who taught chemistry and geology at UVM bought this property. He and his wife, Jessie lived very happily in this house for thirty-seven years. He probably was the one who built the garage. Professor Eldridge Jacobs died in 1957, but his wife remained there for two years, until she sold the property to UVM in November of 1959.

Death doesn’t give a person any new positive qualities or removes the person’s negative personal characteristics.

Ham House, IA (A vindictive spirit still is stomping up the steps to try to get revenge).

Biltmore Hotel, FL (The spirit of Thomas Fatty Welch still is a jovial spirit, full of fun, and has a deep appreciation women).

Spirits let the living know that they are there for a variety of reasons.

Booth House, VT (Apparently, the spirit of John Booth is still upset with the renovations made).

Bittersweet House, VT (The spirit of Margaret Smith readily appears to the living, being a good hostess).

Westover Plantation, VA (The spirit of Evelyn Byrd is still the mistress of this plantation, who appears to those who need a kind word).

Spirit’s sometimes do not want to share their special place.

Captain John Nabb House, VT (It was tolerable having other living roommates throughout the eras, but now he has a boatload of living people are keeping him company; disrupting his peace and quiet).

Living people has seen his apparition, describing him as being dressed like a captain, having thick sideburns and a bulbous nose who was floating down the hall ways.

A psychiatrist, who was the former director of the Counseling and Testing Center, witnessed the appearance of the spirit of Captain John Nabb and described him as being “an elderly gentleman with distinct facial features; a distinctive bulbous nose. This apparition was ‘shimmery like a jellyfish’; gliding down the stairway.” Having no body gives spirits the perk of being able to slide and float!)

Shows His Annoyance and Anger

A variety of poltergeist activity is part of the paranormal show, courtesy of a fiesty Captain John Nabb.

This spirit’s specialty is slamming doors and windows.

The custodian received the full treatment when to his amazement a scowling spirit of Captain John Nabb floated by the custodian and knocked over the bucket full of soapy water.

The cranky spirit of Captain John Nabb still is upset and does what he can to express his feelings.

Paranormal investigator and author, Thomas D’Agostino has reported that the spirit of Captain Nabb may be unhappy with how the living are using his house, with the number of folks there and perhaps the renovations done when the UVM got ahold of it.