The first thing the visitor sees on the left is the old graveyard, up on a hill… 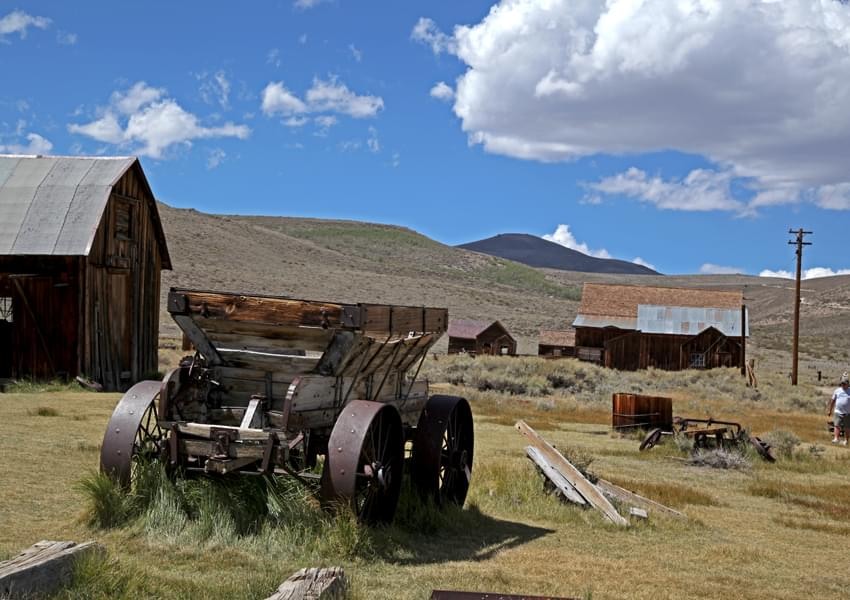 Over the years, Tom and I have visited the ghost town of Bodie. When we turned off the highway onto the dirt road, it felt like we were traveling back in time. The first thing the visitor sees on the left is the old graveyard, up on a hill. Then, what is left of a genuine California gold-mining ghost town, Bodie, comes into view straight ahead and on the right. Wow! It is really a fascinating experience to explore this historical time capsule to see an authentic old west mining town.

Today, one hundred and sixty-eight of the town’s buildings and homes are still standing, and in good shape, relatively speaking, for a ghost town. It is very much like the ghost town of Bannack, but a lot bigger in size. It is being preserved in a state of “arrested decay.”

Some structures date back all the way to 1849. The houses have the original owners’ private possessions that they had left behind and give the visitor a good idea about what it was like to live here. The general store still has products for sale on the shelves. The store owners said that they would be back when the economy improves, which it never did in Bodie. 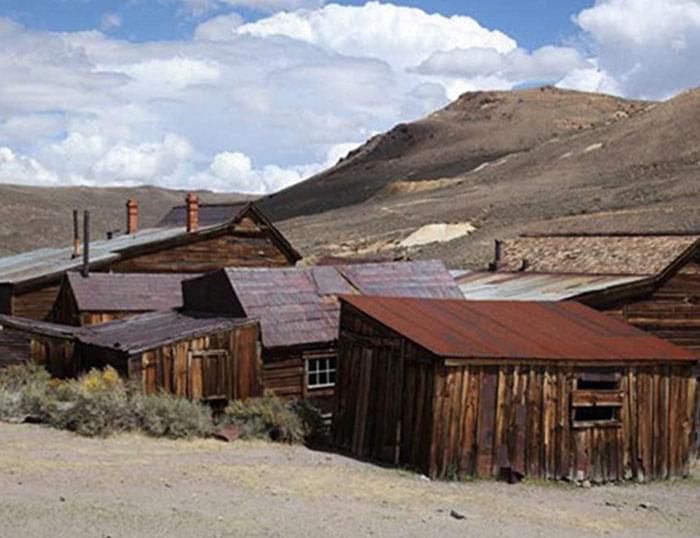 There is a museum of artifacts from the town’s history, located in the Miner’s Union Hall building. The main streets are intact, with a saloon, a bank, a livery stable, various buildings, an inn, a school and a church, to name a few.

The Methodist Church can be entered, as well as some of the surviving commercial buildings that are being used to serve the public. Others can be seen by looking in the windows. The graveyard is also still in good shape. The mines are also still there, though collapsed. The old Standard Mill buildings are still standing, but not in shape to tour by visitors, and remain closed. It is being preserved in a state of “arrested decay.” For five dollars an adult, and three dollars per child over a year, the visitor can walk down the dusty streets of the residential areas, the main street, the red-light district area, and the mine itself. Some buildings have been restored enough for the staff to live in, to sell books and stuff and to house a museum of artifacts. 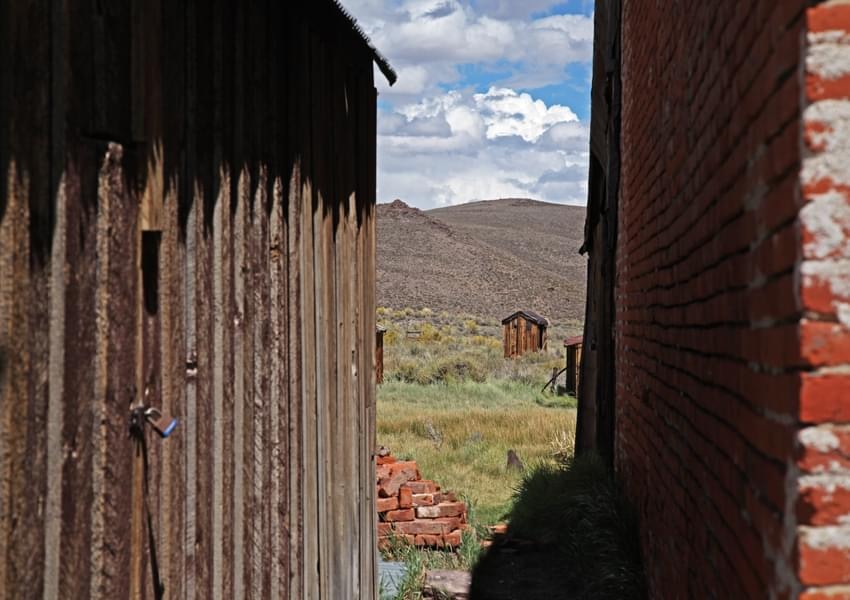 Near the Nevada – California border, Bodie was home to 10,000 people in its heyday, in the late 1870s. In 1849, a prospector, W.S. Bodie, and his partner, Black Turner discovered large gold deposits in the hills near where Bodie was destined to be built. Though Bodie died prematurely, a mining camp sprung up.

In 1870, investment money from New York, funneled through contacts in San Francisco, was used to build shaft and tunnel mine systems, improving the mines’ harvest of gold. The town of Bodie bloomed and grew tremendously. The booming economy revolved around thirty gold mines in the hills above the town.

Bodie had its own Milling station for the ore, keeping the process in town. As a bustling gold mining center, Bodie was able to offer many perks of larger cities, including a Wells Fargo Bank, four volunteer fire companies, three breweries, three newspapers, several churches, a brass band, a railroad, miners’ and mechanics’ unions, a Longfellow’s Lodge, pine-slat homes, one school, an undertaker and a jail.

While parts of Bodie were civilized, the underbelly of this frontier mining boomtown wasn’t so nice at all. While some of the great wealth earned from mining was put to positive uses, miners who were well-paid and other seedier outsiders also gravitated toward gambling, drinking and whoring in several brothels with the prostitutes who had their little cabins right down the street.

At its financial peak, the economy supported seventy saloon establishments. It isn’t surprising that violence and pain caused by greed and immorality was rampant; so much so that the town earned the nick name of “Big Bad Bodie.” The town’s Methodist minister, Reverend F.M. Warrington, commented that the town of Bodie was a “sea of sin, lashed by the tempests of lust and passion.”

Besides miners, in-town residents, and prostitutes, Bodie was the favorite place for despicable visitors from hell because of the remoteness of Bodie plus a place of wealth, card games, sensual pleasures and drinking. These bad ones were described as being “desperate, violent characters, who lived by gambling, gun-fighting, stage robbing, and other questionable means”; and were willing to kill anyone who got in their way to get what they wanted in riches, pleasures and power over others. 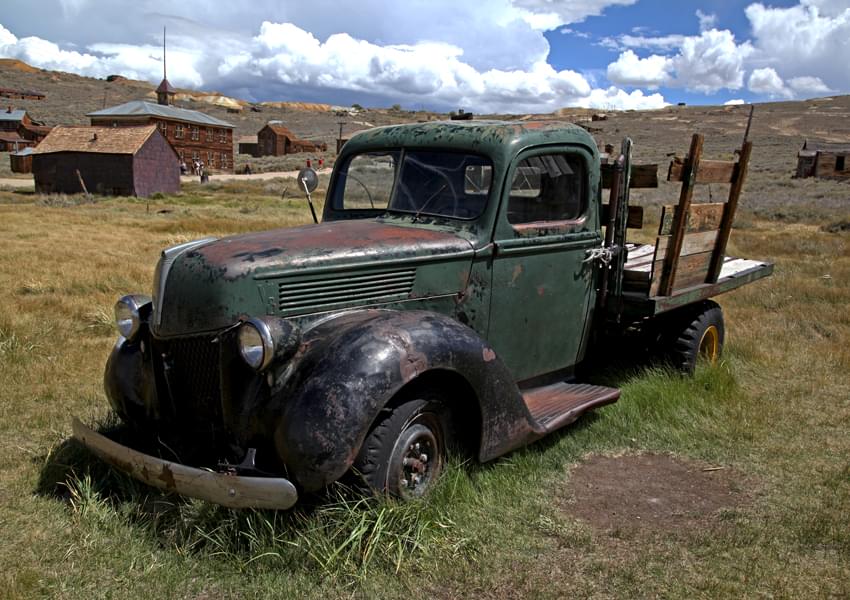 Unfortunately, there was only one jail, and probably not enough lawmen to keep these thugs under control. The consequence is that at least one person a day was killed. The undertaker made a good living!

As is the case in other mine-based towns, the population became less and less numerous as the mines petered out. New mining techniques kept some going, but the writing was on the wall for a slow death of this industry in Bodie. By the early 1900s, Bodie became a tourist town as well which helped with the economy. In the 1920s during Prohibition, people would come here to drink and party, and the authorities would look the other way.

What helped to quicken the demise of the town was a devastating fire in 1932 that destroyed 95 percent of the buildings, caused by a child playing with matches, who was mad because he didn’t get the kind of birthday cake he had wanted. He set fire to the kitchen table. 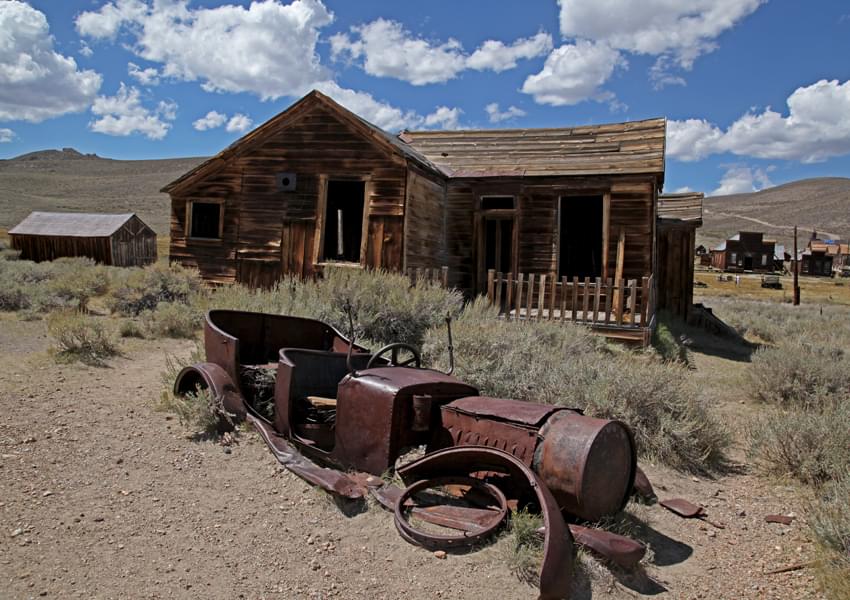 However, people still lived there until after World War II, when the last producing mine, “Lucky Boy” was shut down in 1947. With no way to make a living, people would leave, taking a truck load of their valuables with them and leaving the rest in their former homes.

Because Bodie was so far away from modern cities, no hotels or restaurants opened for tourists. The possibility of becoming a town supported by tourism was never launched.

Starting in the 1940s through the 1960s, the town was left to decay. Only six people were left in town. In 1962, it was bought by the state of California and became a state park.

Though Bodie is a ghost town that only has rangers living in some of the high-end houses, there are still at least twelve spirit people there in residence, plus an apparition of a white mule that still call Bodie their home. 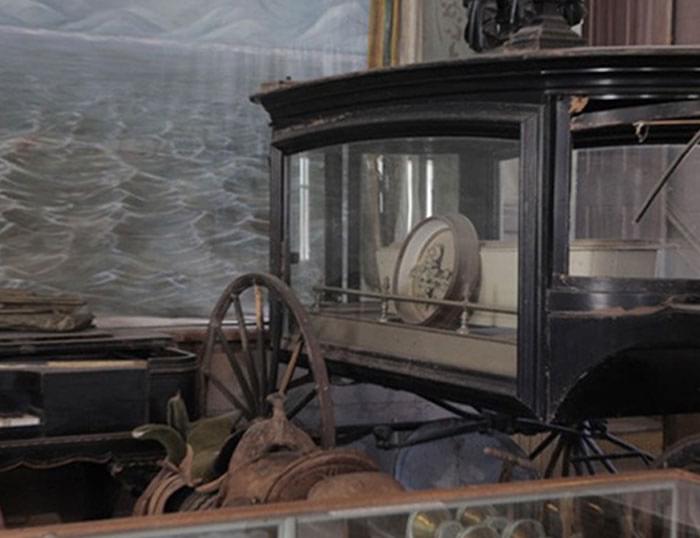 A lot of people were killed during Bodie’s wild gold rush era during its hey day, due to bullets flying, accidents, and poor living conditions.

At its very end as well, Bodie had some of its last citizens die unexpectedly. One man known as Ed, not exactly a stellar citizen, shot his Indian wife to death in a drunken rage; shooting off one of her breasts. She later died in a hospital. Three of the others, not much better than Ed, took the law into their own hands. They tied Ed up and laid him in a creek. They kicked him until he went unconscious. He drowned in the creek.

One died from a huge gash in his face, another died from a hemorrhage that blew up his head like a balloon. The third man disappeared and died somewhere in a ravine. The remaining three people, who had nothing to do with Ed’s murder, lived to tell the tale.

It could’ve been a curse laid on them by the dead man, or it could’ve been just a series of really odd coincidences. Sometimes spirit people who die unexpectedly in any era want to still be involved in this world, and fill this need by helping the living people with their duties concerning the spirit peoples’ favorite structure or place.

Active spirit people in Bodie come from all of Bodie’s years; the town’s early era to the recent past as well. Some of Bodie’s spirit people have decided to join the Bodie State Historic Park staff, trying to help the living in charge of keeping their favorite place, Bodie, intact and preserved, and deal with people who think that the rules don’t apply to them. These self-centered visitors think that everyone but them can’t touch anything and bring it home as a souvenir.

They volunteer to keep an eye on visitors, as the rangers can’t be everywhere. When souvenir hunters take anything, large or tiny, they also take with them the curse that comes with illegally taking these treasures.

People who take stuff are fated to experience bad luck and misfortune, until they send everything they have taken back to the rangers at Bodie. Rangers get letters with stuff that has been sent back, explaining how the curse came true for those naughty visitors who took something they shouldn’t of have. 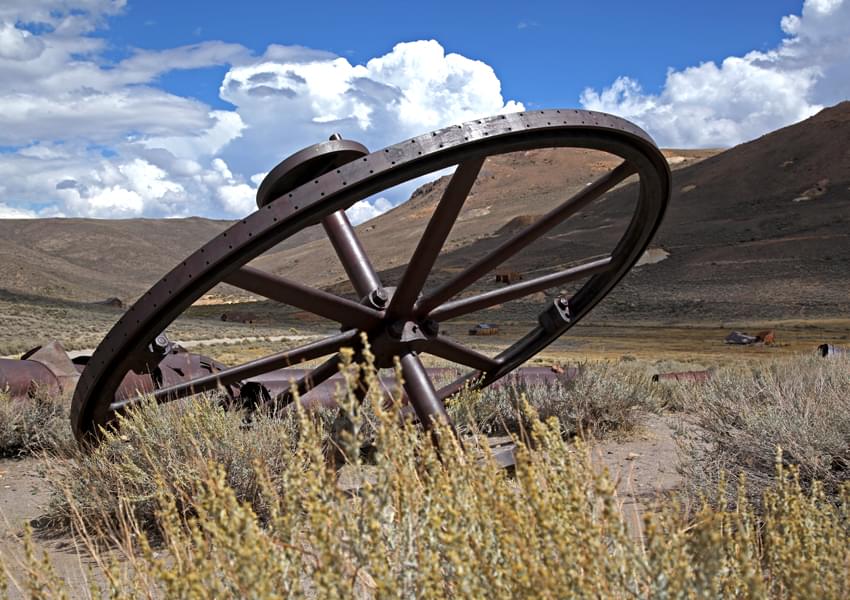 OTHER HAUNTED Locations in Bodie

While the park is open all year, this area has been known to get 12 feet of snow, and is accessible only by snow mobile or skis. The park is staffed by park rangers and volunteers, some of whom live in the houses in Bodie.

Bodie State Historic Park consists of 500 acres on a spur range of the Sierra Nevada, at about 8000 feet above sea level. The land that the community was built on is high, dry, sandy ground that supports sage brush and antelope brush, but no trees. It is truly in the middle of nowhere, about 26 miles from Bridgeport, 15 miles off road from highway 270. 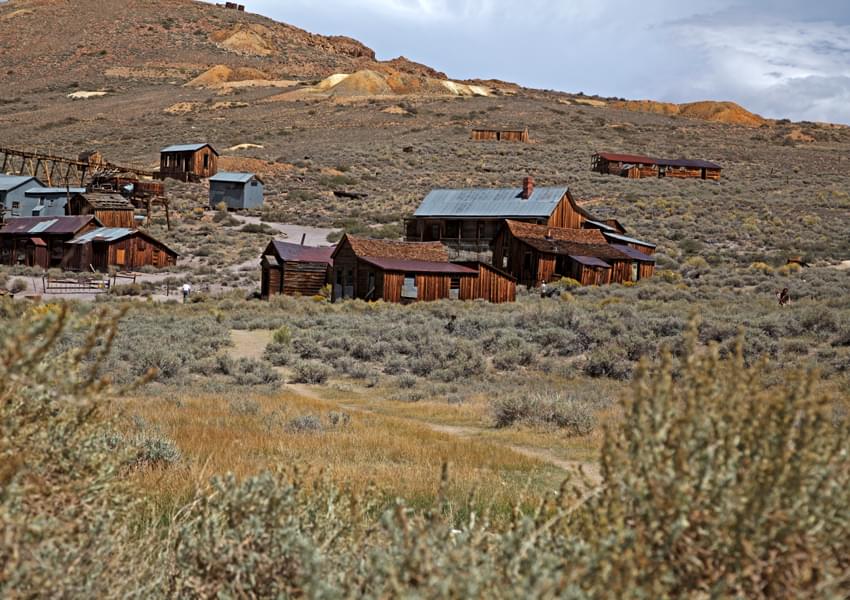