Apparently, a former guard is still performing his duties while still fuming.

Fort Worden State Park and Conference Center is described as being a “434-acre multi-use park with over two miles of saltwater shoreline and a wide variety of services and facilities. The park rests on a high bluff overlooking Puget Sound. Many historic buildings remain at this 19th century military fort.”

The Fort Worden Guard House Building now is the home of The Visitor Information and Gift Center. Like the rest of the buildings found at Fort Worden State Park, the structure has a limestone foundation and wooden clapboard sides. It has a nice front porch, and is solidly built. Inside, walking in the front door, there is a room that was the guard station, now the information/and beginning of the gift shop.

Walking into the next room, the gift shop continues on the left side of the area, with a row of holding cells on the right side of the room. These cells are pretty small and stark, perhaps the perfect place to sober up someone who had over-indulged in alcohol.

More cells were located in the basement of this building, to hold more army offenders, in need of serving more time in jail. 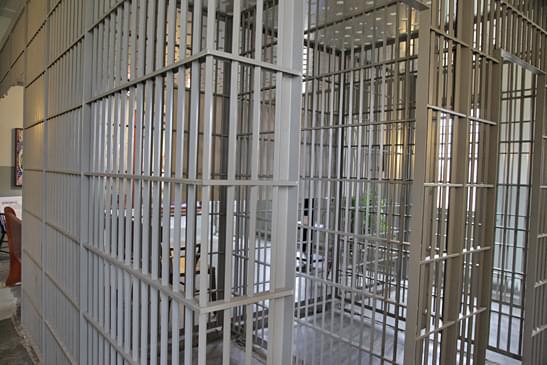 Fort Worden was established in 1889; to be part of the Coastal Defense System. The small outfit of soldiers that were first stationed here in this rustic outpost lived in tents, on top of Artillery Hill, and probably in the areas down the hill as well. Artillery Hill was main air defense installation where the gun placements, and lots of underground cement bunkers were located; the main structure of defense for Puget Sound. Radar was added later to detect approaching submarines. By the time it was closed, there was a considerable amount of structure here.

The first of the existing buildings seen today were not built until 1902-1904, after the Federal Government declared Fort Worden was to be a major Army installation; the headquarters for the Puget Sound Harbor Defenses: a U. S. Army (Coast Artillery Corps) Fort. Fort Worden was the “strategically important position in the triangle of defensive forts constructed to protect the entrance to Puget Sound and to safeguard the naval shipyard at Bremerton.”

Beginning in 1905, the 126th, 30th, 62nd, and the 108th Coast Artillery Companies were stationed at Fort Worden, after the first 23 buildings were constructed around the Parade Grounds, in 1904. Enlisted men lived in the buildings located along what is now called Eisenhower Ave, and the officers lived in the stately houses across the Parade Grounds along Pershing Avenue.

While Port Townsend offered the delights and conveniences of civilization, this Army base offered its residents a self-contained place that provided everything that was needed. By the time the construction was finished, Fort Worden was like a small city, with not only living quarters established, but also 228 main buildings; such as administration buildings, kitchen and mess halls, a bakery, a chapel, a hospital, power house, signal station and wharf. It goes to reason that the fort would also have a jail for the enlisted personnel who had issues with anger, alcohol, and following the rules of conduct. Misbehavior had some consequences; like doing some time in the “Brig.”

Fort Worden was an active installation throughout both the world wars, until it was decommissioned in 1950. During the 1950s, this property became a Washington State “treatment facility” for youth with a variety of mental issues and behavioral problems. Finally this state property became a state park in the 1970s, but was almost destroyed in the name of progress. After nearly deciding to rip down the old buildings (OH NO!!!), they fortunately changed the plans for this beautiful property, influenced somewhat by the protests of the preservationists. But most importantly, the real motivator to change the plans for the property was the reality of the cost factor to the state to tear down the considerable amount of concrete used to build the Artillery Installation on the hill. Artillery Hill not only protected Puget Sound, but also was the main reason why Fort Worden wasn’t torn down!

The Washington State government came around to the idea of preserving this important slice of history, while also providing many opportunities for people to enjoy the property as well. Many people rent the old officer houses for family retreats, celebrations and over the holidays. Others enjoy camping and hiking on the old base property, appreciating the lovely outdoor opportunities for recreation.

A variety of educational opportunities are also made available here, using the Fort’s renovated and restored original buildings. Besides visiting the Visitor’s Center and seeing the old Guard House and Jail, tourists and visitors like to explore the Coast Artillery Museum, the Commanding Officer’s Quarters Museum, and the Historic Point Wilson Lighthouse, that all offer opportunities to review the history of yesteryear. Tours of Artillery Hill are also very popular.

Other opportunities to learn are offered through events and classes provided by The Port Townsend Marine Science Center, Madrona MindBody Institute, Third Ear Project, Corvidae Press, A Branch of Peninsula College, The West Coast Campus of Goddard College, Centrum and The Port Townsend School of Woodworking.

Because of the number of spirit residents, many paranormal investigations/and some conferences are held at Fort Worden throughout the year. 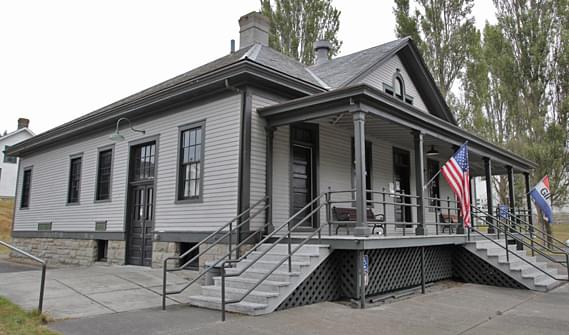 Apparently, a former guard is still gong forth with his duties while fuming about his death.

A sergeant on duty in the Guard House, who was discouraged and depressed, accidentally killed himself with his pistol. He was handling it and it went off, killing him.

When people die from a dumb mistake or accident, they sometimes can’t let it go and are stuck where the accident happened, either because they blame themselves, or don’t want to accept the fact that they died from such a stupid accident, perhaps reliving the circumstances, trying to outrun or change what happened to cause their death.

When a person’s death can be seen as a suicide, though it actually was a dumb accident or a murder, the entity can be restless.

When old military installations are reconstructed historically, even when they had been completely destroyed, can act like an environmental trigger and draw spirits back into activity in this world who loved their service there, or had life-changing experiences there that were for their good or that led to their demise.

Fort Worden has drawn back many entities, including the unfortunate guard who worked at the old jail/Guard House.

is described as being a shy and sometimes angry ghost who is mad at himself.

His shadowy, fuming presence has been felt and seen many times inside and outside the Guard House.

Outside the Guard House, he manifested his apparition when invited to do so by investigating ghost researchers.

Many unseen presences have been felt and captured on film –

by various paranormal investigators, in the areas near the old Guard House:

Around the end of the Parade Grounds where smoking was permitted, and around and in front of the Guard House.

A big “Yes Indeed” is in order!! Fort Worden is a popular place to be for not only the living but also for the spirit people who once lived there while still in their bodies in this world. People have had personal experiences all over the property, and paranormal groups have caught hard evidence and some rare photos of spirits. The old Fort Worden Guard House has paranormal activity, both inside and outside because of a male spirit stuck in his frustration and because it seems to be a gathering area for spirits of others who enjoy visiting and staying at Fort Worden.

Many paranormal investigators have held investigations on Fort Worden grounds:

Several have apparently caught some hard evidence in and around the Guard House, as well as have reported having personal experiences. 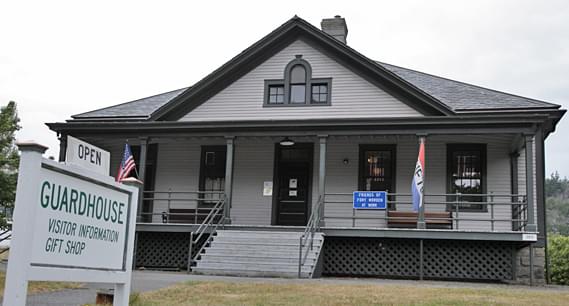 Fiona Bloom, a paranormal researcher and author of 20 books on ghost hunting, was such an investigator, who visited Fort Worden in April of 2003, when she was attending a conference in Port Townsend. While using her reliable Olympus camera, she saw beforehand with her own eyes what she called “Sparkles“. Fiona described them in her report, that you can read yourself.

She recalled, “I have never seen such bright and colorful sparkles. They were vivid, crayon box colors. They were large; the smallest was the size of a baseball, and many others were as large as beach balls. Most people would probably describe them as orbs.”

Fiona further explains, “These ‘sparkles‘ never show up in the photos. They are simply an indication of when we are likely to get anomalies on film, as well.”

Fiona continues, “Generally when I go ghost hunting, these lights and orbs are at least 20 feet away. At Fort Worden, they were next to me. Some were probably close enough to touch, but I was taking photos too quickly to pause and investigate.”

She was pleased with what she caught after developing her film; the sparkles she saw were strong indications of spirits being present.

Huge orbs not caused by lights or lens flare (read the article; she explains why), were caught on film.

Fiona reports, “In one photo, a clear, brilliant blue ghostly figure was standing in front of me just outside the Guard House. I did not see this figure–or any other–when I took the photographs. I only knew that the “sparkles” were exceptional, and I was probably photographing other anomalies. As I expected, this ghost showed up on the negative and in the print. It is my only clear photograph of him.”

This brilliant blue ghostly figure appeared after a fellow investigator, Z’Anne, asked him to appear for them. He complied, insinuating that he is an intelligent spirit, able to hear the living.

Enter the Fort Worden State Park south entrance, on Battery Way, and follow the signs to the Visitor Information and Gift Center, which is due north, just past the tennis courts and Parade Grounds, and across from the theater.