Many spirits are wandering around who
find comfort, enjoyment and chuckles in this building. 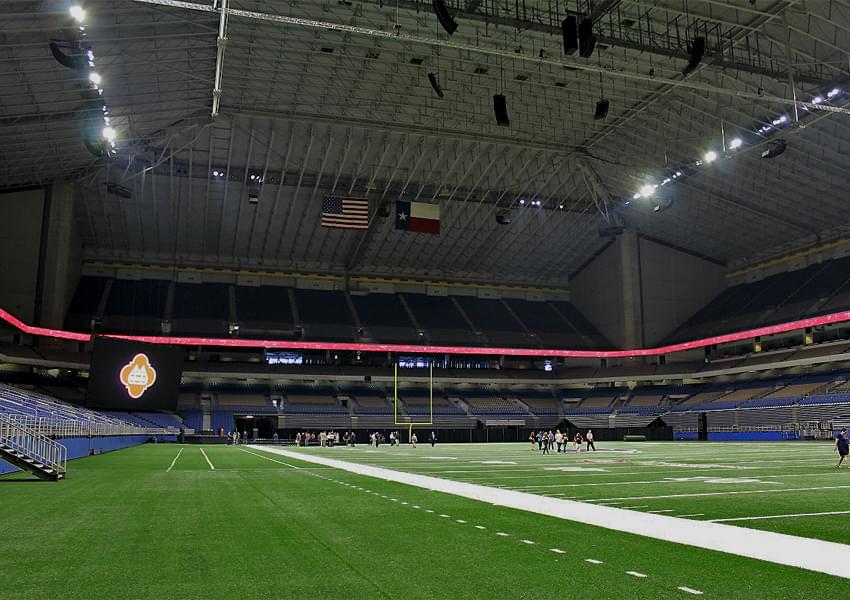 The Alamodome is San Antonio’s 64,000 seat, multi-purpose stadium made of concrete, steel, bricks and glass. Alamodome is the 10th-largest covered field sports stadium by capacity. This 186 million dollar sports & event stadium is the home of sporting events in football, basketball and other entertainment such as religious events, musical concerts, conventions like the Home and Garden Show, trade shows, Charity events, Illusions Theater & the Alamo Bowl.

The city of San Antonio tries hard to get a variety of activities scheduled in their pride and joy, The Alamodome, much to the benefit of the people of San Antonio; though some gripe about the tax-payer expense.

Not only do San Antonio residents have a source of wonderful entertainment, but the folks who live outside of San Antonio come to town to see whatever is scheduled; according to their interests. This also means that funds are coming into town to support various businesses located in San Antonio.

Apparently, living people are not the only ones who enjoy the events here. Spirits who had their lives taken from them in war, or disease, or accident or murder or natural causes find something on the schedule to liven up their after-lives here; pleasant diversions from their bad ends, regrets, sorrows, losses and their inability to let go of this world for a variety of reasons. 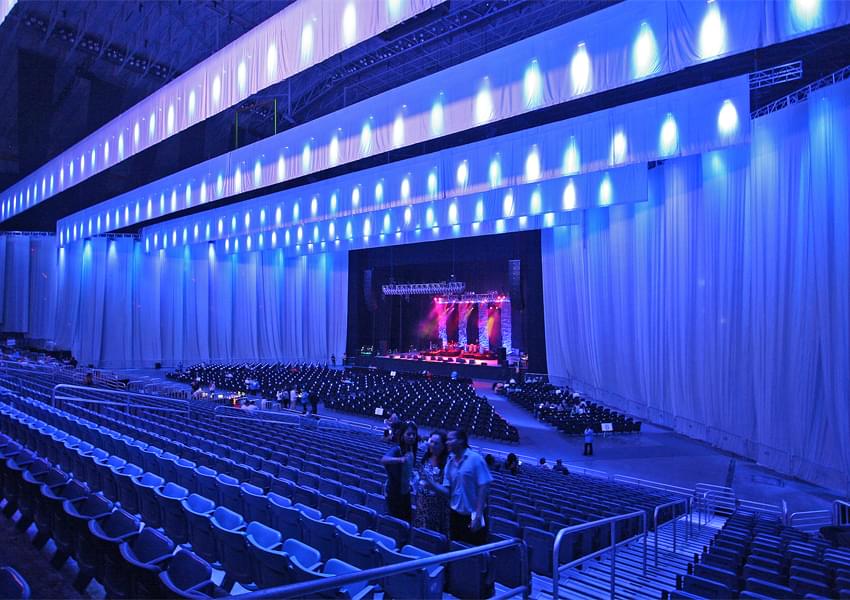 People who give it their all to flee the life-threatening danger they find themselves facing, sometimes don’t succeed in making it to safety and die. Sometimes their spirits can’t let go of their determination to survive and have the tendency to relive the ordeal to try to make the outcome different; and survive this time around.

A desperate female spirit of a frontier woman who died in one of the battles fought in San Antonio tries to get inside in this super-safe looking structure.

People who loved their life in a favorite place and perhaps died there may find themselves as spirits tied to the land. If their favorite spot is torn down, they may move into new buildings built on land they are tied to in spirit form. Even better if the new building offers some entertainment that they enjoyed while alive!

Folks of all ages, male and female who loved, lived and died in San Antonio because of the many battles, or with Teddy Roosevelt’s Rough Riders or shot in arguments, or died in accidents/from disease or suffered the death penalty may be attracted to all the activities and sports that the living so enjoy as well.

Construction workers who die on the job in building structures, sometimes stay in the building where they died in their accidents.

A Construction worker fell to his death while helping to build the Alamodome.

A cleaning crew, washing the windows on the ground floor, saw a female apparition floating toward the door on the outside, dressed in 1800s frontier attire, obviously in great distress, as she began to frantically knock on the glass of the front door.

A maintenance man heard a loud pounding of one of the window panes located on one of the upper floors. The sound reverberated throughout the floor.

Folks tied to the land in one way or another are apparently huge sports, music, convention, theater, festival, religious events, family activities fans. Perhaps the spirit of the construction worker stays here, enjoying the events as well.

Lights have been known to turn themselves off and on.

Doors open by themselves.

In a certain section of the stadium seating, cold spots have been felt.

Makes her presence known by emitting a strong, aroma of lilacs.

A female presence is sometimes felt.

This spirit enjoys herself, perhaps in the company of spectral friends and family.

She is dressed in Frontier attire common for women to wear during that era of history.

People and Maintenance workers have heard the sounds of a very sorrowful woman suffering from grief, sobbing; who probably saw her family massacred by a merciless enemy during or after a bloody battle.

Even though she came to forget what she suffered in life by watching the events held at the Alamodome, she sometimes has to cry.

Perhaps this same female spirit likes to float around in front of living witnesses, trying to be cheerful and sociable. 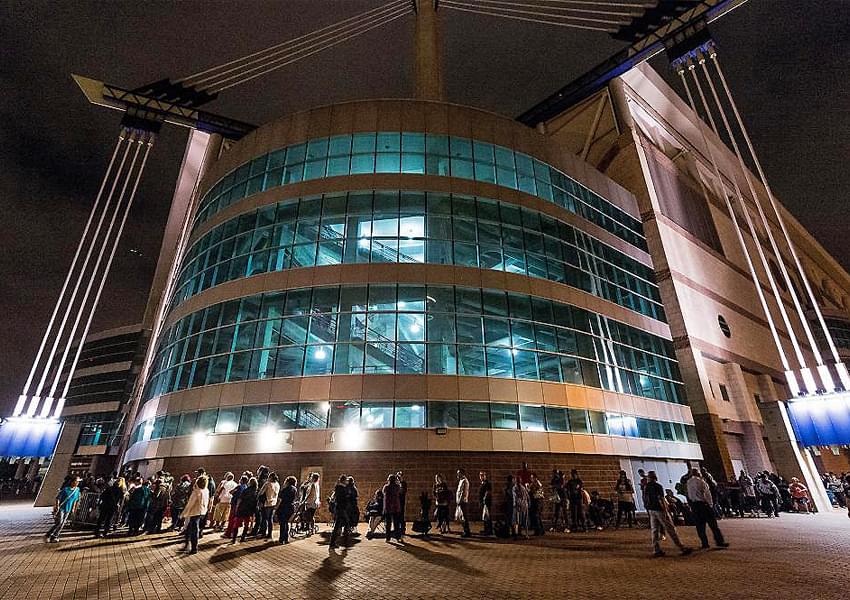 PROBABLY SO. The paranormal activity listed above has been shared many times. However, there has been no hard evidence gotten or shared that would prove these spirits’ existence; probably because the city of San Antonio doesn’t want people to be afraid to come to the events, or want ghost hunters milling about, upsetting the spirits who are here, and causing inconvenience to the business that need to occur.

Since The Alamodome was built on land where bloody battles were fought, spirits killed on both sides have attached to the land seem to have found their way inside, like many buildings in San Antonio that were built on land with spirits.

Many living witnesses have reported these manifestations mentioned above since The Alamodome was built. The

Medium Clarisse Simpson went to the Alamodome to do a psychic investigation and picked up two spirits, a male and a female hovering in the air by the windows on the upper floors outside the Alamodome.

Paranormal hard evidence if gotten hasn’t been shared with the public.

The Alamodome is located is located on the southeastern fringe of downtown San Antonio. If you park in town, it is 5 dollars cheaper and you only have a short walk there. 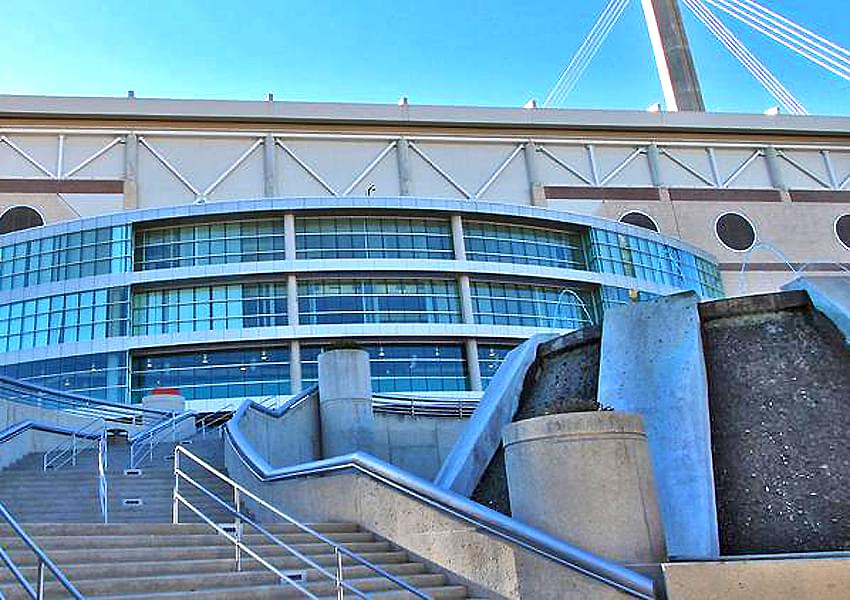