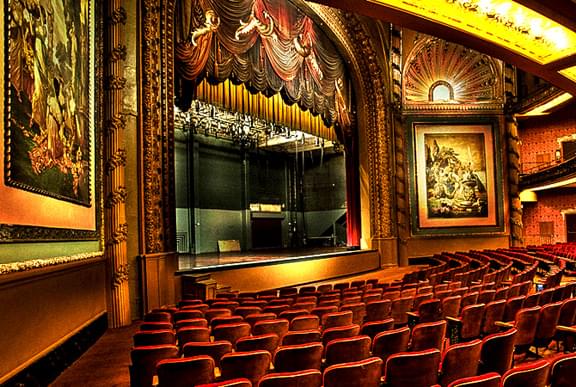 Don’t be fooled by the ho hum outside of this theatre, whose size is now dwarfed by the huge hotel on one side and a commercial building on the other. This 1913 theater is magnificent inside, fully restored to its 1913 classical splendor, including the high ceiling, and ornate decorum. It offers 3 levels of seating: Orchestra, Mezzanine on the second floor and the Balcony on the third, providing seating for 1,784 patrons. 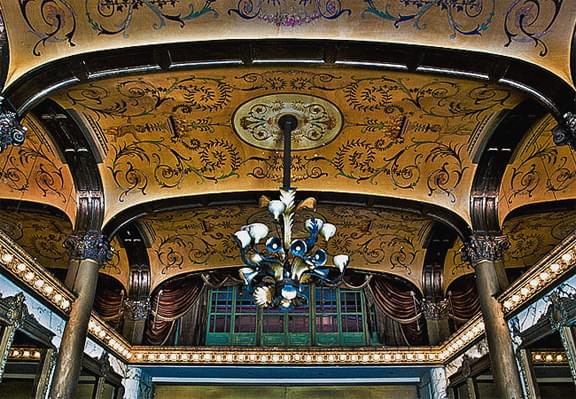 Opened on March 24, 1913, as a vaudeville show place. It was built by Mark Beck, who called the finished theater, “the Valhalla of vaudeville.” From 1913 – 1929, vaudeville reigned as a popular genre in the entertainment business. Mark Beck was forced to sell 3/4 of the stock to vaudeville business mogul, B. F. Keith, in order to book the high class acts who traveled the Keith Circuit.

After a shaky start, the popularity of the theatre skyrocketed, becoming very profitable indeed after Sarah Bernhard was booked to perform there. A vaudeville act knew it had made it to the top of their art when they were booked at The Palace Theater. From 1915-1920, all the top stars, including Irving Berlin, Eddie Cantor, Leon Errol, Helen Keller, Sophie Tucker, Blossom Seeley, Harry Houdini and Fanny Brice performed on the theater stage. Jack Benny made his stage debut here in 1924. 1926 -1930 brought such talent as Judith Anderson, George Burns and Gracie Allen, Laurette Taylor, Helen Morgan, Bob Hope and Ethel Merman.

However, The Palace Theater found it harder and harder to compete for the entertainment dollar, because of the growing popularity of radio and movies. The Great Depression didn’t help things either. In 1931, despite wonderful acts such as Kate Smith, Burns and Allen, Sophie Tucker and William Demarest, the theater owners saw the writing on the wall, and became a high class movie theater.

In the 1950s, an attempt to revive vaudeville was made, and stars like Frank Sinatra and Judy Garland, as well as other top groups were well-received, but not enough to revive this art form, vaudeville In the early ’60s, The Palace Theater was renovated and brought back to is former glory. In 1966, the theater reopened as a real theater, offering musical shows, beginning with “Sweet Charity.” The Palace Theater has been going strong since.

In the 1950s, a top-notch, acrobat high wire team, “The Four Casting Pearls,” had a gig performing here on stage. Unfortunately, a tragedy happened, when tight rope walker-acrobat, Louis Borsalino, who was performing without a net, fell to his death to the floor below.

When it is quiet and the theatre is empty, the apparition of Louis Borsalino has been seen performing on the “dress circle rim,” i.e. swinging from the rafters. Then the witnesses of this apparition hear a scream, as they see this apparition falling to his demise. 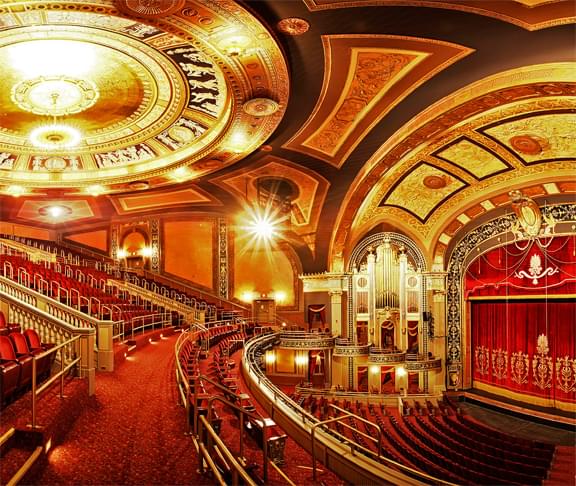 Yes Indeed! The restless entity of Louis Borsalino is still ashamed and embarrassed because he fell in such a grand, famous theater, and is trying to get it right, but doomed to fail, as the apparition always falls. Coming soon – Paranormal Research & Investigative Studies Midwest (P.R.I.S.M.) has this theater on their investigation schedule, with hopes to find evidence of this haunting through scientific means.

The Palace Theater can be found in the heart of New York City’s theater district, on Broadway, between 46th & 47th Streets, near Times Square.