Fort Stanwix National Monument can be found on approximately a 16 acre campus in the downtown area of Rome, New York. The reconstructed fort and its green acreage lies between N. James St., and Black River Boulevard, Erie Boulevard W and East Park St.

Based on the findings of the 1970-1973 archeological excavation, a reconstruction of Fort Stanwix was completed in 1978, as they found out the exact locations of the walls, the bastions, the 5 log structures located on the parade grounds, and the outer defenses as well.

While the original fort was made of timber, this new facsimile of this fort, in the shape of a 220 ft. by 220 ft. square, is made of reinforced concrete, covered with soil, and faced with half-timbers. Off of each corner of the fort, pentagonal bastions were built, 36 ft. by 90 ft. square, in the style of the original fort. Adding the bastions to the size of the square shape of the fort, makes its total footage, 330 ft by 330 ft. square. The berm was put in place on 3 sides of the fort, “followed by a ditch, a parapet, and a glacis”. The meadow surrounding the fort on the grounds allotted this national monument is kept in its 18th century appearance, looking much like it did when the fort was an active structure.

Stepping inside Fort Stanwix is like stepping back in time, as it is a historical museum, portraying life as it was before and around the Revolutionary War; 1758-1781.

All the living quarters are as they were; basic, stark, without many frills; sort of what you would expect in a frontier fort. There are also many visual, informative displays, and a film as well, explaining the history of the fort, what it was like living and serving here, and the human stories connected to this special place.

Also interesting is the display of the buildings that were built upon this land in the 1830s; a regular few blocks of homes, and businesses, that looks like a regular city. There was no hint of what was buried beneath it all. Traces of the fort were completely covered up.

Some of the 18th, 19th and 20th century artifacts found have been cleaned and restored, and are on display at the Fort Stanwix National Monument’s museum, greeting and visitor center, located on the southwest corner, near Black River Boulevard The Marinus Willett Collections Management & Education Center is in charge of the museum, and rotates the displays during the year. 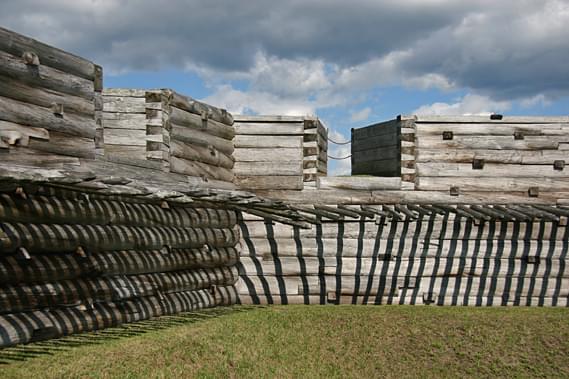 In 1755-56, at the beginning of the 4th English/French Inter-colonial War in the colonies, called The French and Indian War; (1754-1763), the French and their Indian allies had destroyed several British forts, and had terrorized settlers, along German Flats, the Mohawk Valley, and the Oneida Carrying Place. The Oneida Carrying Place was a vital land trail for people traveling between Lake Ontario and the Atlantic Ocean. The need for Fort Stanwix became very apparent, if Britain wanted to hold on to their land and settlements in this area.

Fort Stanwix was originally built in 1758, and named for British Commander, Gen. John Stanwix, who was in charge of establishing this important defense. Built on this strategic spot, at the Oneida Carrying Place, this military fort’s forces were able to control one of the two water and land routes from Canada to New York, and offering a strong shield of protection from the French and their Indian allies, along the entire Mohawk Valley area. Most importantly, Fort Stanwix became a staging area for British troops to launch their offenses against the French. During this time, 2,000 to 12,000 men were posted here, troops from New York and New England.

In 1768, 5 years after the French gave up and left, a new Boundary Line Treaty with the 6 Indian Nation confederacy was signed at Fort Stanwix, which set up an unmistakable boundary between Indian land and where settlers could go. Future settlers were given a large chunk of land, east and south of the Ohio River, in hopes this would stop encroachment on Indian land. The Iroquois also ceded a large track of land west of the Ohio River, opening up even more land for settlers. Fort Stanwix at this point was run by a skeleton force. The fort was in major disrepair by 1774, and totally abandoned by the British, except for an enterprising trader; but not for long.

The Revolutionary War began in 1775, and American forces decided to repair this woe-be-gone fort, and renamed it Fort Schuyler in 1776, using it to control and defend this important area. Col. Peter Gansevoort was in command, with the 3rd New Jersey Regiment stationed there. The inevitable battle with a mixed military force, made up of British, Germans, Canadians, Loyalists and Indian allies happened in August of 1777. This bloody siege lasted 21 days, but Fort Schuyler prevailed. The threat of the soon-to-be arriving, incoming American reinforcements drew the British forces away, and they were eventually defeated by other reinforcements before they could come back to the Fort Schuyler. The troops stationed here also participated in the Clinton/Sullivan Campaign of 1779, to stop the destructive and terrifying raids done by Loyalists and Indians on the frontiers of New York and Pennsylvania.

In 1781, the combination of heavy spring rains and a fire, destroyed much of this fort, leaving it useless as a fortified structure. The Americans abandoned it as a useless relic that had served them well, allowing it to decay and fall apart over the years.

In 1830, the land was valuable, so the city of Rome allowed the last remains of the fort to be built upon with new structures, becoming part of downtown Rome. 105 years later, The Fort Stanwix Act was signed, to establish Fort Stanwix National Monument, meaning that at some point in the future, the land would have to be donated to the government, or the funds to purchase the land would have to be donated, in order for this national monument to be established.

In the 1960s, during an Urban Renewal effort, the now, old run-down properties were bought by the city of Rome, who then turned the land over to The National Park Service, fulfilling the requirements set by The Fort Stanwix Act. The land was cleared of these old buildings, preparing it for the next step.

In 1970-1973, archeologists carefully excavated the site, identifying the boundaries, and buildings found within the original fort structure, as well as finding thousands of artifacts. In 1973, the state of New York and The National Parks Service began to reconstruct Fort Stanwix/Schuyler, finishing phase one in 1976, just in time for the American Bicentennial celebration. In 1978, Phase 2 was completed, presenting a finished national monument, Fort Stanwix/Schuyler.

Restoration/renovation and reconstruction of buildings and structures have all been known to cause/activate paranormal activity.

Old military forts have long been home to spirits of those who lived, worked, suffered and died there. Many emotional moments of life can cling to the structure, or apparently to the land itself.

Entities of soldiers are drawn to structures/ships/planes that they served on in a community of like-minded men, even if they died elsewhere. 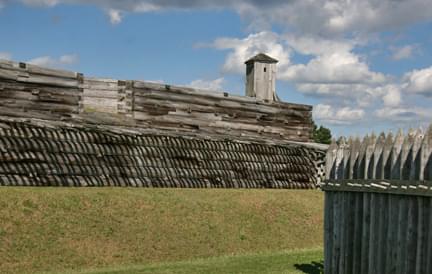 Unseen presences are felt, door knobs turn, doors open and close, and lights go on and off, with no plausible explanation.

The alarm system inside the fort has been tripped often with no reasonable explanation.

After a walk through, and serious communication efforts, psychics, mediums and clairvoyants have come to the conclusion that Fort Stanwix is one of the most haunted places in the Mohawk Valley.

Paranormal investigators have found the spirits to be camera shy, but some evidence has been captured on film, on EVPs, as well as the reports of personal experiences that some had, that weren’t caught on film.

Rome Investigators of the Paranormal posted a YouTube video, showing that something moved their spectrum camera that was mounted on a tripod against the wall. It shouldn’t have moved, being securely locked into a tripod. This camera also showed that the gate leading to the bombproof hospital used during the 21 day siege moved deliberately by itself. See what you think. youtube.com.

The Northern Paranormal Society did two investigations of Fort Stanwix, and had both personal experiences as well as recording EVPs in the Siege hospital, and the Commandant’s Quarters. They think that some of the EVPs are residual, while two others could be either intelligent or residual. One of their female investigators felt that she was hit on the head in the Commander’s Quarters. Review of this filmed incident revealed that it wasn’t a bug.

The second investigation was interesting as well.

“One team repeatedly saw a shadow blocking out the light coming in from under a door”.

To see all what they caught and experienced, check out their report at: thenorthernparanormalsociety.com/14.html

Staff and visitors have seen apparitions of soldiers in period uniforms; both British and American colonial dress, in various spots around the fort.

In the army barracks, a commonly seen entity is a one legged man sitting on a bed.

Entity of a little boy –

Likes to run between the buildings, then disappears.

Shadows have been seen just before sunset on the parade grounds –

A strong shadow was seen at the far end of the Missionary Quarters, that blocked out light from the window.

At all Hours – Footsteps, disembodied voices, male and female, sounds of someone sweeping the floor, and chopping wood.

Sunrise – A woman, sick with worry, has been heard crying for her sick child.

Phantom sounds of Fife and drums are heard.

Input from psychics, mediums and clairvoyants, personal experiences of guests, staff, and paranormal investigators, plus some other evidence captured point to the very probable existence of entities still on duty, perhaps some of their family members, and perhaps some entities of soldiers killed on the battlefield around the fort, or executed for some offense. 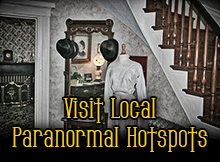 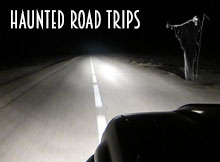 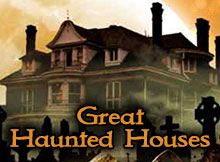