Is home to a male protective spirit who saved a life and gives life-saving warnings. 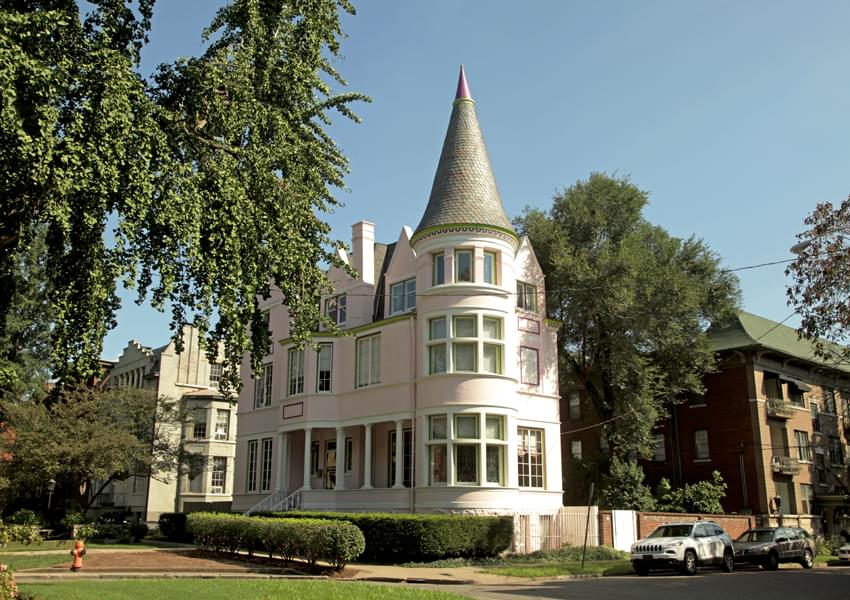 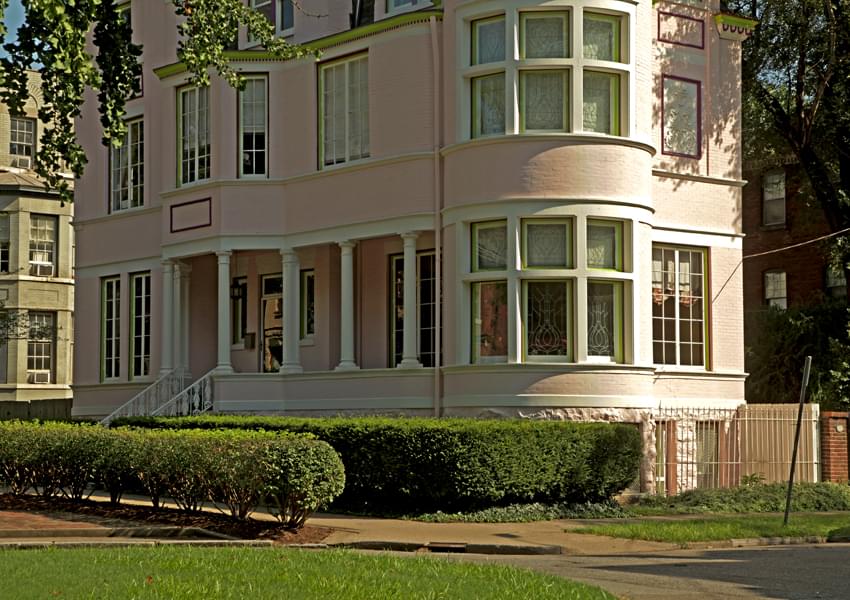 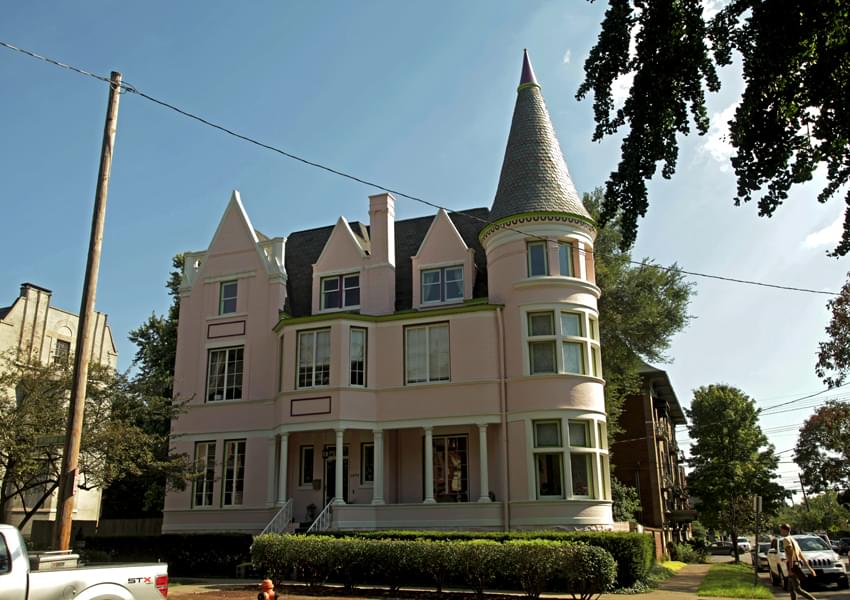 This pink-colored, large, three story, 1891 brick, Eclectic with Chateauesque detailed Victorian Mansion has architecture which was inspired by French Chateau’s designs, including a spiked, steeply rounded turret roof, which sits upon a rounded section in the front of the mansion. This rounded section has three long observation windows on each floor, giving a glorious view of the neighborhood and park from a strategic position. Besides having Parkay floors, lovely original woodwork, this old dame has lots of nice touches in the Victorian decor and antique style furnishings. The grand staircase is framed with double arches and connects to all the floors. 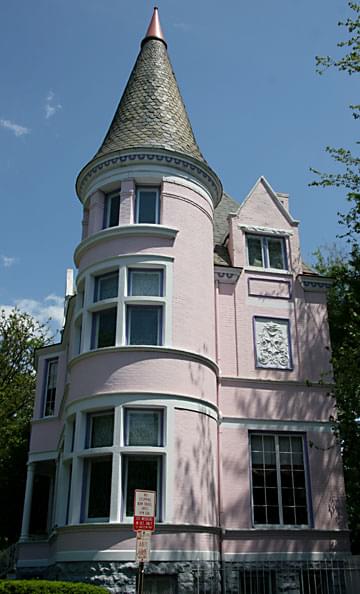 Today, The Pink Palace has 5 bedrooms ( 1 King, 3 Queen, 1 Full ), 2. 5 baths, a full kitchen, a sitting room, living room and a beautiful pool with a surrounding garden.

The current owners rent out The Pink Palace for special weekends, such as Derby Week, and the Ryder Cup 2008 (which takes place at Valhalla about 20 minutes away.)

This glorious mansion began its history as a Gentleman’s Club and Casino; not as a gambling joint, but a place for male residents of St. James Court and Belgravia Court to relax and unwind from the stress of the world at that time. They enjoyed a good cigar, brandy, stimulating conversation and cards, as well as other past times. During the evening hours, it is thought that the very large closets, on the upper floors, which were big enough to fit a small bed inside, were used by ladies of the night to service some of the men who visited this club.

The Gentleman’s Club was in existence for only a few years before it was sold to a private family, who lived there until 1910. The local chapter of the Woman’s Christian Temperance Union bought this mansion, to be used as their headquarters and were the ones to paint this red brick structure pink. After that, a parade of families owned The Pink Palace. One noteworthy owner was George H “Eardrum” Wilson, who invented early hearing devices.

David Domine in his book, Phantoms of Old Louisville, conducted a dinner interview with the current owners and others who have lived in The Pink Palace. To read the whole story and exciting details gathered by David, buy the book.

The Pink Palace seems to be the home of at least one spirit, Avery, who is a friendly, protecting presence, watching out for the people who live in his mansion. Avery and his family were the first private owners of The Pink Palace, after buying it from The Gentleman’s club and Casino owners.

The entity of Avery

Has been described as an older southern gentleman, clean shaven with white hair, wearing an older era duck suit, with a string tie. His see through apparition was 6 ft tall, and has appeared to residents about to face danger of some kind.

During the 1970s and ’80s, parts of the Pink Palace were turned into apartments. A single woman, who lived in a basement apartment was taking a bath, when Avery appeared. She was filled with dread, jumped out of the tub, just in time to avoid contact with the potentially lethal, huge cement block which was thrown through the window just above the bath tub by two crooks trying to break in. Avery had saved her life.

The entity of Avery has appeared to other residents in the kitchen, moments before a fire broke out because of faulty wiring, which is a common problem in older homes. 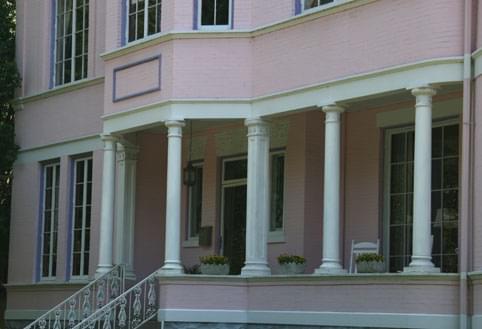 It appears to be.

Avery has appeared every time right before a resident has faced an unknown danger, giving them warning for their benefit.

The Pink Palace can be found on the southern end of the lovely St. James Court Street; a street which is home to many lovely Victorian mansions. Constructed originally for the first well-to-do owners of these homes, St. James Court St. has a long, beautiful rectangular park area, running down the middle of this street. The end of this park strip is oval at each end of St. James Court. In the middle of this delightful greenery is a lovely fountain. Weddings and other events can be held in this area. 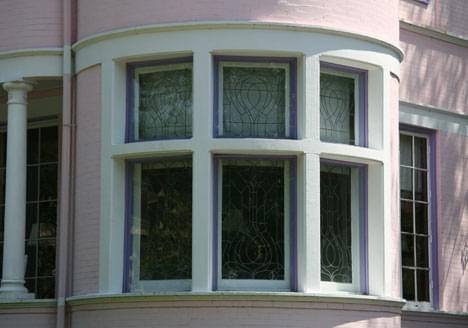