Mrs. JP Speed is pleased with the pristine state of her mansion,
and doesn’t mind sharing it!

She remembers all the fine events of culture and still adores her treasured belonging.

WOW! This glorious, three story, immense, brick mansion has a grand presence, sitting on its huge lot, in pristine condition, surrounded by its beautifully landscaped grounds, which also sports a patriotic horse statue. (A variety of painted horse statues are seen throughout the city of Louisville as of 2008.) When a law firm buys a property, it usually is looking pretty good by the time the office opens and is established, which is fortunate for the purchased old mansion/house/building. This was the case for the JP Speed House, which is in fine shape, but not open for public viewing.

While the Speed Mansion has had some changes done to the inside, in the process of becoming a law office, its beauty inside is still front and center, offering a spectacular setting for law offices. It features high ceilings, lovely woodwork, marble and stone, beautiful fireplaces, fancy ceiling decorations and other fixtures and design perks of the early 20th century era. 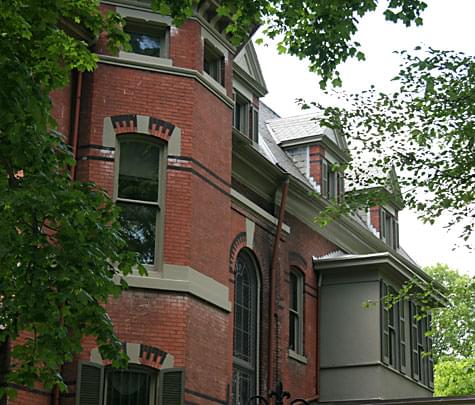 This sprawling, Victorian-Gothic home was built in 1885, in the oldest, posh neighborhood of Louisville by a well known, Louisville home contractor, Dexter Belknap, who moved his family in to live there. In 1893, the James P. Speed family bought this home and moved in to enjoy its 48 rooms and 20 fireplaces. When the first Mrs. James Speed died, James married for the second time, Miss Hattie Bishop, a prominent society lady of Louisville, who was a concert pianist, music teacher, humanist, and philanthropist. Harriet was a huge promoter and supporter of music and the arts in Louisville.

After James died in 1912, she had an elegant, large recital hall/music room built at the back of the mansion, in the area which connects the home to the carriage house; complete with a stage area, comfortable seats, high, metal stamped ceilings and lovely chandeliers. Harriet made good use of this music hall. She played on her case piano located on the stage, and opened up the room for community concerts and recitals for the local Bach Club and other groups, all of which she attended, until she died in 1942. 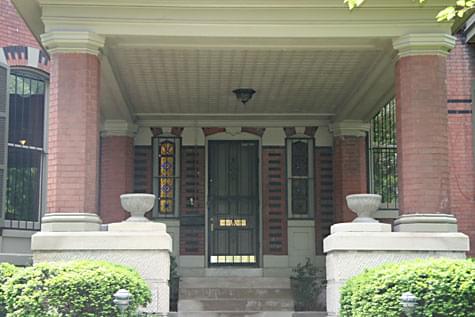 However, she had established The Speed Art Museum and the Hattie Bishop Speed Music Room Trust, which has funded a 60 year run of the Hattie Bishop Speed Endowed Concert Series. This series has presented some of the world’s finest classical musicians from well-know performers to rising stars, performed at the University of Louisville School of Music, Comstock Hall.

In the process of transforming the mansion into a law firm, the stage area was enclosed with glass walls for a conference room, but still has the concord piano, which was turned into an electric player piano when the law firm bought the mansion years ago. The recital hall itself now is used as a lounge area, and has a “tiered landing system”, so desks and bookcases could become part of the room, though the ceiling and lovely chandeliers are still seen.

The happy, pleasant entity of Harriet Bishop Speed has chosen to spend her afterlife in not only her art museum, but also her home, near her cherished piano, and perhaps reliving the many concerts she so enjoyed in the recital hall. She doesn’t seem to mind the structural changes to her recital hall.

The hallway leading to the recital hall:

An apparition of an older woman dressed up for an evening, complete with jewelry, has been seen floating out of the the old powder room under the stairs, making her way down the hall to the old music recital area.

This entity has also been seen sitting at her piano and sitting in the lobby area as well.

Piano music has been faintly heard, wafting all over the mansion, coming from an unknown source. 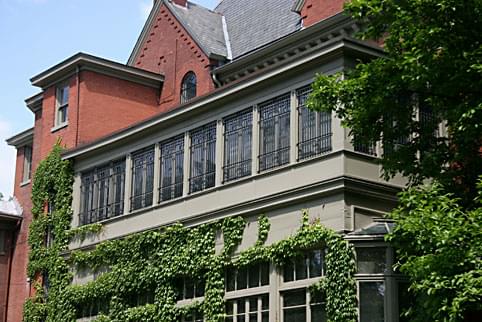 Harriet seems to be pleased with the pristine state of her mansion, and still enjoys not only its ambiance & beauty, but also her beloved music room and piano!

While no official paranormal investigations have been conducted here, author David Domine has gathered some witness reports, which can be found in his wonderful book, Phantoms of Old Louisville. 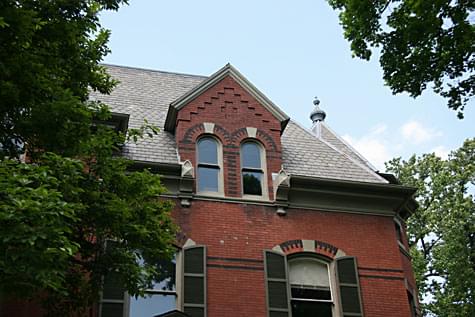 The JP Speed House, currently the home of the law offices of Franklin and Hance, PSC, is located on the corner of West Ormsby and Garvin Place, just south of West Oak Street, between South 6th Street and South 4th Street.