In 1814, Richard Southgate, who was a local lawyer and Senator, built this glorious mansion on his family’s land, using the labor of 1812 British P.O.W.’s, in the place of the family log cabin. This original Southgate Estate was a full city block in size. As the years rolled on, its acreage was sold off.

Richard and Ann were generous people who entertained many distinguished people, such as Abraham Lincoln, before he became President, and other not so famous people as well. Before they left to fight for Texas’s independence in the Battle of San Jacinto, a whole company of soldiers led by a Captain Sherman, enjoyed a full evening of Southgate hospitality, which uplifted their spirits and boosted their morale. This outpouring of generosity is given partial credit for the victory won there.

Throughout its history, it has been the home of many distinguished people. Richard and his wife, Ann, were blessed with many children who survived to live full lives. Their son William became a lawyer, a Kentucky State Representative and a U.S. Congressman in 1837. Their son, Edward, became a Methodist Minister. Their daughter, Ann, married a surgeon, Dr. Nathaniel Shaler. Their son, Nathaniel Southgate Shaler, became a noted geologist, teacher and historian.

When Richard Southgate died in 1857, at the ripe old age of 83, he willed this house to his daughter, Francis Parker. She modernized Southgate, and added the entrance tower and widow’s walk and the Mansard roof. Mrs. Parker passed the house on to her daughter, Julia, in 1869, with the understanding that Francis would live and use the home for the rest of her life. 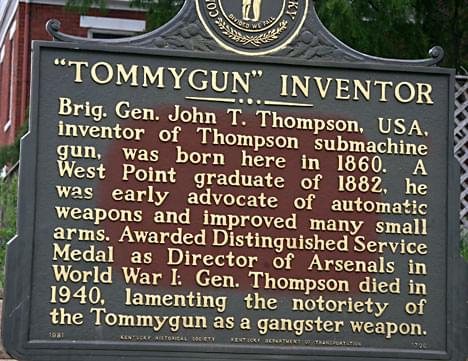 The son of Julia and Regular Army officer James Thompson, Brigadier General John Thompson, an 1882 West Point graduate, was born here in 1860. Brigadier General John Thompson invented the Thompson machine gun in 1920, as well as several other automatic rifles, which revolutionized modern warfare. It upset him immensely that his Tommy Gun was the favorite weapon of choice used by the gangsters to kill their opponents and innocent people as well in the 1920s. After he died in 1940, his gun was revised a little and was used again in WW 2 by Allied forces, which should have given him some peace.

In 1888, Southgate House was sold out of the family line to Fannie and Lewis Maddux. In 1894, the first meeting of The Keturah Moss Taylor Chapter of the Daughters of the American Revolution happened in the living room.

In 1914, Southgate House was sold to The Knights of Columbus Home Company of Campbell County. They improved the property by adding a brick porch and a large room in the rear of the house, which had to be rebuilt after a 1948 fire.

Southgate House is now being used as a place to experience up and coming rock and roll bands or musicians, as well as more established rock artists. Each story of this mansion is used for a good purpose, as the listening experience is valued for the great acoustics and cozy surroundings.

The ballroom was originally located in the basement. The Knights of Columbus added a back room. When it was rebuilt in 1948 because of a fire, the basement ballroom was enlarged, building a two-level, horse-shoe balcony which is on the basement/first floor level. Today, this ballroom area is perfect for larger performances, often featuring “an eclectic blend of local, national, and international performers.” All the seats have a great view of the stage whether one is sitting in the balcony or main floor. There is also plenty of room for a stellar stereo sound system.

The first floor originally was the place to find the living room, the parlor, the library and dining room. Today, the first floor is called June’s Lounge, which is the main bar, billiard room and offers juke box music, making it a grand place to go with friends and just relax.

The second floor originally had bedrooms and a lady’s parlour/sitting room. Today, a room, known as The Parlour, is used for more intimate, smaller concerts, and is considered by many to be the best concert room in this mansion.

The third floor probably housed more family members and possibly the staff, among other things. Today, it is used as an art gallery. Gallery Hours: 3PM-7PM, 7 days a week. 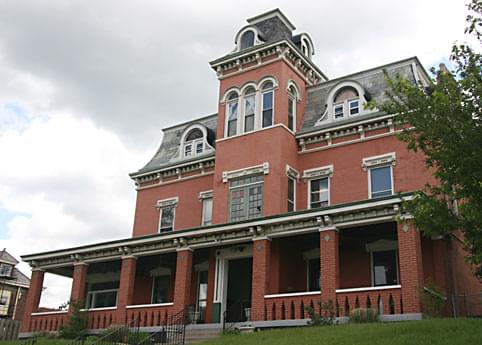 It seems that some who called this magnificent mansion home, or have strong attachments to Southgate House, have hung around to enjoy it in the afterlife, and to keep an eye on the living on all the floors, sometimes making their wishes and feelings known in dramatic ways, startling the unsuspecting employee or visitor. There are three known entities, and perhaps some others not identified.

A female entity, thought to be Elizabeth –

Legend says that sometime after 1857, after a widow’s walk was added, a woman called Elizabeth, who probably worked for the Parker family or the Maddux family did a needless, tragic thing. She used to go up to the widow’s peak on the roof of this mansion, to watch the riverboat that her husband worked on arrive or leave the port. One day, she saw his boat explode in flames in the harbor. Thinking that he was dead, she promptly hung herself! Unknown to her was that her husband had missed the boat that morning and wasn’t killed.

Another theory of my own is that the entity of Francis Parker may be the female presence,

who is still so attached to her home, that she is spending her after-life here as well.

This female entity goes about her business. The front door has been known to open and close by itself in the evening hours, like she is taking her evening walk.

One Christmas, someone didn’t approve of where the Christmas tree was set up, in between the French doors. The tree was suddenly pushed 4 feet across the floor to the corner of the room, without an ornament out of place. It is thought that the entity of Elizabeth or perhaps Francis, was giving her opinion.

This female entity, Elizabeth or Francis, perhaps is the one who plays the piano located upstairs.

An apparition of a 6 year old boy is seen throughout the house.

Knocking on the walls may be his calling card.

A soldier who died in the Civil War, has attachments to Southgate House.

He has appeared in a solid form, wearing his Confederate uniform and has carried on conversations with the patrons. Two spots he likes to appear are the men’s bathroom on the first floor and the landing on the second floor.

I suspect that his presence likes to hang out in the first floor bar as well. This entity of the soldier perhaps likes to get some chuckles once in awhile.

A paranormal investigator was sitting at a table in the first floor June’s Lounge. While talking to his girlfriend, his beer slid across the table by itself and landed in his lap. Entities of soldiers have long been known as practical jokers and teasers, at the expense of the living.

Besides hearing a musical entity playing the piano when the living are far from it, the man’s laughter, and the knocking on the walls, many people on the staff have heard the mumbling of disembodied voices.

Yes indeed, according to many eye witness accounts, the entities are keeping an eye on the living, though they politely keep their musical likes and dislikes to themselves, being polite entities with manners most of the time. 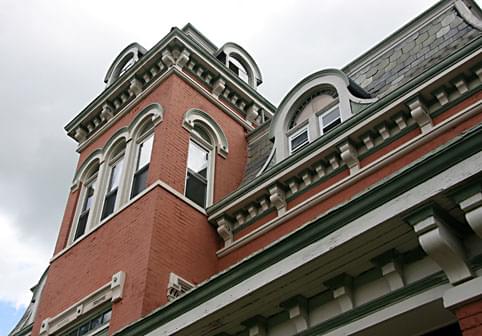