Some patients died from a labor gone bad, while the newborns were saved.

It is a three story, New England style building with very pretty windows, white-washed trim, grey clapboard shingles, mansard, grey slate roof and a delicate, yet grand decor, which is different from any building in Louisville.

Jennie Casseday who was a dedicated Christian, and a devout Methodist, felt called to help the poor women of Louisville, who couldn’t afford medical care. Besides collaborating with fellow social reformer, Jennie Benedict, to organize and start King’s Daughters & Sons Training School for Nurses at City Hospital, they also planned an infirmary for women, which was built in 1892, called Jennie Casseday’s Free Infirmary for Women. Jennie’s supporters and friends built this beautiful, state of the art facility, set back on its property in this residential area, just outside the St. James Court area.

As time passed, this former infirmary building was divided into apartment units in the early part of the 20th century. The building has been kept in good shape, and is still used as apartments. 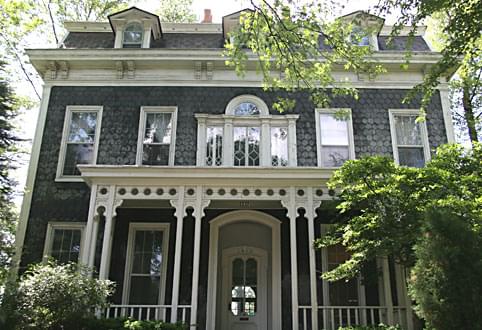 As Jennie Casseday’s Free Infirmary for Women offered hospital and medical care for low income, mostly Catholic women, who were worn out, ill; (with such things as T.B., cholera, 1918 Influenza), pregnant or abandoned, doing the best job they could for the poor. Some patients died of their illnesses, or as a result of a difficult labor. While the children were sometimes saved, the mothers often died. These tragic occurrences are fodder for the creation of anguished entities, which have appeared to the living, occupying the apartments which are found here.

David Domine had to do some deep research into the secrets of this place, and by good luck ran into someone who had an extreme experience as a resident in one of the apartments years ago. He gives a rather scary account of the man’s experiences in his book, Ghosts of Old Louisville, which is a very hair-raising account of an intense haunting.

David interviewed an older man who had lived in one of the apartments as a younger man, right after he had gotten out of the armed services in the 1940s. Little did he know that his living room was part of the infirmary’s maternity ward, because it was a room away from others, in a quieter place in the building. Two beds in this spot were reserved for women undergoing a labor gone bad. Thus, it was often a place where women in a difficult labor suffered and died.

Paranormal activity began slowly and built up in intensity. A priest was consulted to come and bless the apartment. When that didn’t work, the priest came back to do a full blown exorcism, which really got the joint jumping, paranormally speaking.

This young man began to notice odd occurrences that one doesn’t see every day in one’s living room.

A steady stream of music came from a radio which was turned off and unplugged.

A floor lamp continued to be on, despite being unplugged.

At this point, a blessing from a Priest was done, but the activity just increased.

Besides seeing the odd behavior of the radio and light, he began hearing a long, mournful moan which began softly and grew in intensity, ending in sobs.

As time went on, the moans turned to screams and inaudible pleadings.

The light and radio in the living room began to float on their own accord, while hysterical screaming of women in pain filled the air.

A force overcame him, making it hard for him to breathe, forcing him into the living room where he watched the dial on the unplugged radio spin, the floor lamp rotate and felt the temperature in the room become really cold. Water droplets dripped from the wall behind the radio and lamp, and a foggy mist filled the living room. It began to rain in his living room.

It was time to call the professionals for a more serious effort. “Who you gonna call?”…… The Parish priest once again! The Priest then told the young man that over the years, he had performed the Holy Rite of Exorcism in his room twice before.

During the exorcism, the cross flew across the room, the floor and walls shook, the dial on the radio went crazy, the light flickered, mist formed, a big ball of light appeared, the pleading screams of 3 women grew in intensity. Three female apparitions appeared. The young man realized that they wanted to know something from him. Suddenly He knew what they wanted. He told them that their children were fine, and these suffering entities left the apartment, finally free of their torment.

To read the original hair-raising account with all the details, be sure to buy David Domine’s book, Ghosts of Old Louisville. 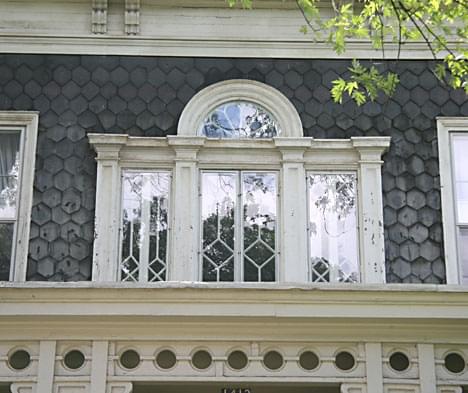 David Domine reports that the young man had a quiet, normal living room for the two years he lived there. However, there may be more entities hanging around the building, as hospitals are often haunted, but their existence hasn’t been reported yet. More secrets may exist, but no one is telling them yet.