Alfred Victor DuPont’s secret lifestyle choices got him into some real trouble.

As a spirit he tries to make amends while still giving unwanted attention.

The DuPont Mansion is a glorious three story, decorative Victorian era Italianate-Renaissance “palatial town home”. It was built by the DuPonts, in 1879, to provide a place to stay for all the DuPont relatives, originally from Delaware, who came down to Kentucky to help start new ventures and run the family’s various businesses.

Found in this three storied, elegant, grand dame of mansions, are the usual public area rooms seen in Victorian abodes, plus 10 bedrooms, that feature all the bells and whistles expected, both in a well-to do 19th century mansion and present day accommodations. Guests of this present day Bed and Breakfast get to enjoy the decor from the past as well as some modernizations expected in a present day, high class Bed and Breakfast.

Decor from the past includes 14 foot ceiling rooms, lovely hardwood/parquet floors, with 10-foot doors and windows to match, and some nice antique furniture. Also, decorative, Italianate plaster moldings and huge, hand-carved Italian marble fireplaces add so much to the ambiance of the place. A lovely wooden staircase connects the floors to the main entrance hall. 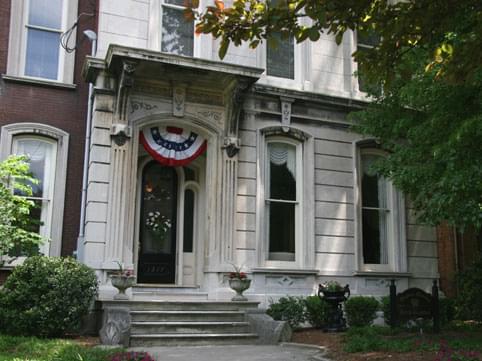 In 1854, Two of the DuPont brothers, Alfred Victor and Biederman, came to Louisville, and started some enterprises. One of the thriving business they started was The AV DuPont and Company, which not only manufactured paper and gunpowder, but distributed these products as well. They created a lot of commerce, products and jobs for the local people. They soon became prominent, successful and well thought of citizens in their own right.

In 1870, Biederman and his family bought the lovely stone and brick Italianate-Renaissance villa country home, built by a Mr. Robinson, on the highest point of what is now Central Park which originally was the front yard /grounds of this country villa. So, it made sense that the DuPont brothers would build their own Italianate-Renaissance “palatial town home” just a 1/2 block north of Park Avenue, just up the street from Biederman’s villa. This town home was for family who came to town to help run their businesses, and for Alfred Victor to stay once and awhile, when he needed to meet with his brother, or for family events.

For Alfred Victor, a bachelor, didn’t live there full time, but preferred instead to live in the downtown Galt House Hotel suite, perhaps because he wanted to be close to their office, but mostly because he had a very active ‘singles life’, to say the least, and didn’t want his family to know what he was doing. 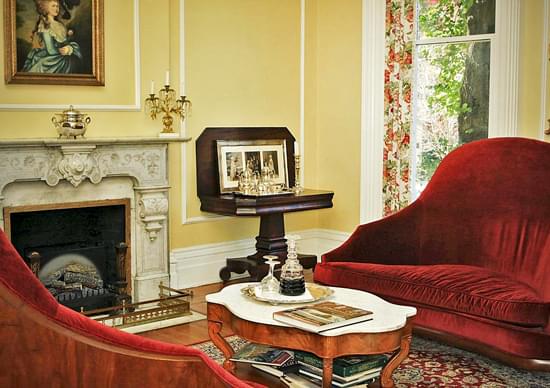 Biederman generously opened up his front yard and grounds, known then as DuPont’s Square, to the public as a recreation area, a place for families to enjoy a picnic and for children to play. Also, many concerts, balloon raisings, and other activities happened here for the entertainment of the town. The city bought this huge plot of greenery from the DuPonts in 1904, and officially turned it into a park, changing its name to Central Park.

The DuPont family eventually sold their palatial town home mansion to a wealthy man, Thomas Prather Jacob and his family, in 1886, as Alfred Victor had no interest in living there, and they no longer needed to have living quarters for visiting relatives. Biederman DuPont had his own home down the street.

Around the turn-of-the-century, this glorious town home would be put to work when it was divided into apartments. The years were not kind to this structure, and keeping a Victorian in good shape takes a lot of money. Rental properties don’t often generate enough income to cover repairs and renovation. By the 1990s it really had sunk to a deplorable state and needed a lot of work.

In the late 1990s, initial funds were invested to save the home, and stabilize it. Enough work was done to get it on the market, though it still was considered a woe be gone fixer upper which would take a lot of investment of funds, time and TLC to make it a profitable property again.

Luckily for the public, this mansion was rescued by the Warrens who bought it in 2000. After investing tons of money into completely restoring the DuPont Mansion, they have established an upscale Bed and Breakfast. In 2002, the Warrens received the Louisville Historical League’s Historic Preservation Award. 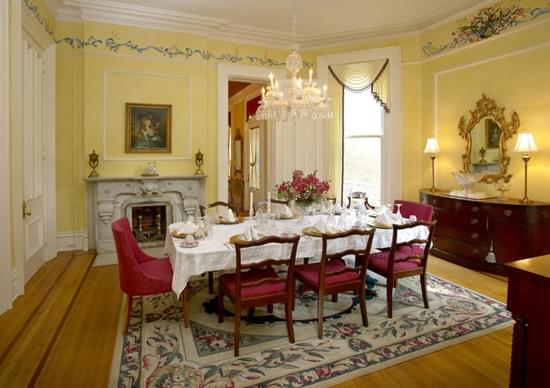 In both of David Domine’s books, Ghosts of Old Louisville and Phantoms of Old Louisville, he gives the readers some great information about the activities of Alfred Victor DuPont when he was alive, and his afterlife, which he chooses to do in both Central Park and the DuPont Mansion on occasion.

Alfred Victor DuPont’s secret life style choices got him into some real trouble. Uncle Alfred Victor’s appetite for intimate liaisons was a life long quest, leading to his demise and unhappiness. This prominent, Louisville citizen was on real friendly terms with the madame of one of Louisville’s bordellos as well as being acquainted with the young women who worked there. Unfortunately, this mistress, Maggie, became pregnant with Fred’s child in 1893. In his panic, he went into denial and tried to send her away. She shot him in the chest, killing him instantly.

After a quick family meeting, the Louisville DuPonts came up with a plan to hide this shameful incident, which would’ve caused a huge uproar. The DuPonts used their influence to convince the paper and police to proclaim that Alfred Victor died of a heart attack on the front porch of the Gal House Hotel, avoiding this awful scandal. The true story was known by the neighbors, but the general public didn’t get the truth until decades later in the 1930s, which must have been an embarrassment to the descendants.

Perhaps, Alfred Victor may have changed his mind, and supported the baby, and dealt with the family shame, if he had had the time to calm down and think about it. Unfortunately, Maggie killed him before he could redeem himself, to her and the baby and his family.

This entity is seeking to redeem himself and find his lost son out of his guilt. As the Galt House Hotel is long gone, this entity has returned to other familiar stomping grounds; Central Park, where his brother’s house once stood and the DuPont Mansion, a place he did visit, and stay at when he wanted to meet with his brother.

Read David Domine’s books mentioned above for the full account – details left out of this story.

A tall, sad male entity in a cape has been known to appear briefly in Central Park at dusk, in front of people and children.

One little boy lost his ball in some tall grass. A tall male entity appeared, holding the boy’s ball, studying the lad. He eventually threw the ball to the boy and disappeared.

A workman who was doing repair work in the evening alone in the mansion during 1998, was startled to see a full formed, one dimensional man dressed in a old fashioned tux, who had appeared right in front of him at the bottom of the stairs. The workman noticed the small blood stain and bullet hole in the man’s chest, before the surprised apparition faded away.

While on this impossible quest, his untimely death hasn’t changed his tendencies to more than admire the opposite sex, which has led to uncomfortable occurrences on the mansion’s main staircase; on occasion, but not recently, and never with bed and breakfast guests. My theory is that while alive, Alfred Victor didn’t feel adequate with women of his own class, so he pursued safer women he deemed below his social status.

David Domine reports that this entity was a bit too friendly with an interior decorator, who was a professional, local woman, hired to help spruce the mansion up for an event on two different occasions. Perhaps the entity of Alfred Victor felt that this interior decorator wasn’t from the elite class, as she was working for the owners of the mansion.

This interior decorator was going down the main staircase, when she felt the presence next to her and felt hot breath being blown into her ear. Another time on a trip down the stairs, she saw a tall male entity, dressed in formal attire walking down the stairs right in front of her, disappearing at the bottom. Her third experience happened on another trip down the stairs. When she reached the bottom of the stairs, she felt an invisible hand grab her bottom. She turned around to see who was there. As she gazed into a blank space, the invisible hand goosed her!

Sometimes carnal misbehavior can lead to dire, unintended consequences. It is thought that guilt about rejecting his son, and causing family shame, holds this entity in this world. The entity of Alfred Victor DuPont is a restless spirit who haunts this “palatial town mansion” on occasion and Central Park, wanting to find a way to take the shame away and looking for the son he wouldn’t recognize. 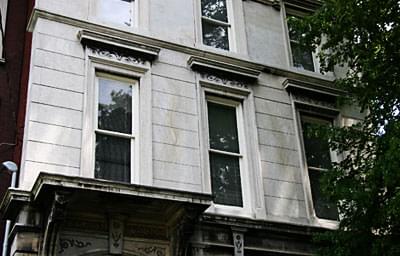 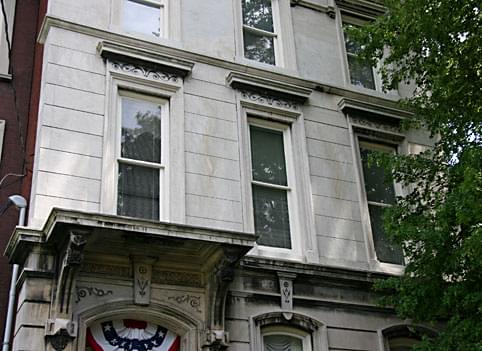