The author that inspired its beginning likes to be an encouraging presence here. 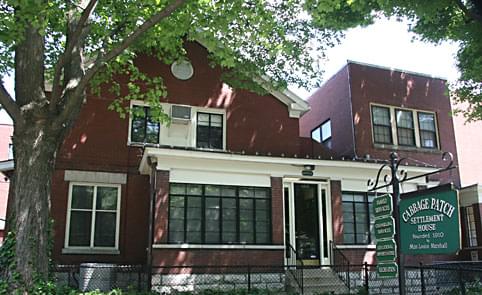 On a slightly muggy day in May of 2008, Tom and I found The Cabbage Patch Settlement House, which is made up of 4-6, 1920s red brick houses with lovely wood trim, fitted together nicely to create a roomy place for their ministry. It offers counseling and family services, educational opportunities, and youth development and recreation programs for low income people.

How it came to be is an interesting story. The neighborhood which was just west of the Louisville well-to-do on King James Court & 3rd and 4th Avenues, was filled with people living a modest life at best, struggling to make ends meet in the slums of Louisville’s Cabbage Patch District. They needed charity, a helping hand, and community resources which could help them help themselves.

Long before the establishment of government-run welfare, some help for the poor came from settlement houses, that stepped up to the plate to help the poor in communities across the United States. What started the idea for this settlement house, was a character out of a best-selling book, written by a well to do social worker and philanthropist, Alice Hagan Rice;(1870-1942), who dedicated her life to standing up for the rights of the poor. Based on her experiences from working with these people, she wrote the novel, Mrs. Wiggs of Cabbage Patch, in 1901. It told the inspiring tale of a Cabbage Patch district mother of five; her struggles, hardships and triumphs, with social commentary added in between. It became a huge success, and eventually became a stage play in 1904, written by Anne Crawford Flexner. There were 4 film adaptations made of this story (1914, 1919, 1934 & 1942).

The Cabbage Patch Settlement House was started by Louise Marshall in 1910, proving what can be done with just the actions of one person. “Because she was willing to take the first step and act on her vision, God grew that vision.” Formed in the powerful spirit of Christian love, with the help of her community, church and friends, The Cabbage Patch Settlement House was embraced and supported by the community, offering much needed help and encouragement, as well as providing a safe place for youth and children to play.

In 1929, the needs of the poor grew, and their original building was too small, so they moved to the series of small, connected brick houses on South 6th Street, and just around the corner from Saint James Court. The ministry of The Cabbage Patch Settlement House is going strong today.

“The Cabbage Patch is unique because we are in the prevention business. We’re helping children and families find ways to break the cycle of poverty and prevent future problems such as homelessness, alcoholism, child abuse, school dropout and acts of crime. This of course not only helps these children but our community as well.”

I bet that Alice Hagan Rice was a big supporter of Louise Marshall’s efforts. She must have been thrilled when The Cabbage Patch Settlement House moved to South 6th Street, a short walking distance from her home, located at 1444 Saint James Court, where she lived with her husband, Cale Rice. I bet she also stopped by to see the children and families there, and talk to the staff. Perhaps she even volunteered her time. She must have loved The Cabbage Patch Settlement House as much as she did her lovely home and neighborhood.

Entity of Alice Hagan Rice has been seen by the living, not only strolling down the sidewalk, going up the walkway to her home, but also has made appearances at The Cabbage Patch Settlement House. In both cases, this female apparition was dressed in 1920s era clothing, with a pleasant smile and gentle countenance.

Volunteers who were working in the evening at The Cabbage Patch Settlement House felt a presence looking at them, causing them to look up from their desks. They saw a friendly lady, dressed in elegant attire, giving them encouraging smiles, before she faded away.

The entity of Alice Hagan Rice has decided to spend her afterlife not only with her husband, Cale at their Saint James Court home, but also likes to visit The Cabbage Patch Settlement House, a place of hope for the disadvantaged, partially inspired by her book.

It seems that this pleasant entity of Alice Hagan Rice, who had long been a champion for the disadvantaged, is still interested in the work done for the poor at The Cabbage Patch Settlement House, and checks up on the living, trying to bring encouragement to volunteers, much to their surprise!

The Cabbage Patch Settlement House, is a Christian, non-profit organization which came into being in 1910, originally located at another location. It’s present location is right across the street from the beautiful building, once known as Jennie Casseday’s Free Infirmary for Women. Both buildings are located on the part of South 6th Street, which is south of Central Park, south of West Magnolia Avenue.

West Magnolia Avenue is a main drag which ends at South 12th St. at the intersection before the railroad tracks. It runs west-east, taking the visitor along the southern boarder of Central Park, and intersects with not only South 6th Street, but also Saint James Court, and South 4th Street, continuing on until South 1st Street, where it changes names to East Magnolia Avenue.