This place is home to a host of spirits, some not so nice; evil in personality.

This building which was originally built on this site was a slaughter house in the 1850s, until the late 1800s. The sealed well in the basement in the current building was used to wash away the refuse from the animals and other more sinister activities, some think.

It is commonly thought that after the slaughter house moved, it was suspected that the basement of this now abandoned building was used for occult worship, using animal and human sacrifices. Handicapped children were “sacrificed back to the Devil.” 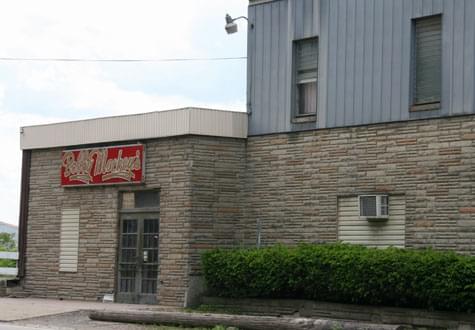 The abandoned slaughter house was eventually torn down, but a speakeasy and illegal gambling joint run by the mob was built on this same plot of land, in the 1920s.

In the 1930s, Buck Brady bought this operation, calling it The Primrose, making it into a successful, above board casino and bar. The mob of course wanted to take over, and wound up forcing Buck Brady out, who killed himself in the end.

The building was then reopened as a mob-controlled Latin Music night club, called The Latin Quarter, which began its long history of being a place for musical entertainment, even though shady people were running the place. The wall-space by the stage still has pictures of dancing Latina women hanging there. Illegal gambling continued, off and on throughout the 1940s & 50s, until the police finally put the gambling operation completely out of business when they took all the machines in 1955.

On the positive side, the building itself has a very long history of being a music hall/tavern, and is the longest continuing music promoter of local artistic talent in the Cincinnati area. Other music bars moved into the building over the years. In the early 1970s, it became The Hard Rock Cafe, but was closed down after some fatal shootings on the property.

Bobby Mackay, an accomplished recording country music artist himself, bought the property in 1978, continuing to offer musical entertainment. While it is a funky looking wooden structure which has seen better days, it is a beloved spot to gather to hear country style musical entertainment for both the living and the entities who live there. On the weekends, the patrons are treated to Bobby Mackay and his band’s music. People seeking ghosts and paranormal experiences also love to visit the building as well. Bobby Mackay is taking advantage of the paranormal activity taking place in the building by selling a DVD for ghost lovers!

Bobby Mackey’s Music World is thought to be the most haunted night club and bar in the United States. Because of its bloody and sordid history, one can see why. There is a sign posted on the door, warning its patrons about the possibility of paranormal activity and to enter at their own risk!

There are many possible sources for this unique gathering of ghostly company, who can be rather rowdy.

Mentally handicapped children were sacrificed to the devil in the basement.

Murder victims from the speak easy, illegal gambling operations, and the recent 1970 shootings, still occupy the building, wanting justice, or aren’t ready to move on just yet.

Entities of Pearl, Scott Jackson and Alonzo Walling: Three ghosts are connected to a rather gruesome incident. In southern Indiana, a young woman by the name of Pearl, fell in love with a dental student, Scott Jackson, who was rumored to be an occultist; a satanic worshiper who was a member of the slaughterhouse satanic cult. When she became pregnant, Jackson and a medical student, Alonzo Walling, drugged her sarsaparilla drink with cocaine, when she refused to have an abortion. She thought that Scott Jackson would marry her. They tried to perform an abortion on the drugged Pearl who was then five months pregnant, but failed.

Scott Jackson and Alonzo Walling did the next best thing in their twisted thinking it is thought. Since they didn’t have the dead fetus, they decapitated poor Pearl while she was still alive, for there were signs of a struggle, and lots of blood at the crime scene. Popular legend says that they used her head in a satanic ritual, and it was dropped down the well in the basement of the slaughter house. Pearl’s body was found not far from the abandoned slaughterhouse.

Others say Scott Jackson and Alonzo Walling disposed of her head at the dentistry school in the incinerator in the basement. Scott and Alonzo were caught, tried and hung for this horrific crime. They were offered life in prison instead of the hangman’s noose if they said where the head was located, but they said they were innocent of her murder, not willing to confess their deeds. Others think that they didn’t want to suffer at the hands of the devil.

They may be haunting Bobby Mackey’s Music World not because they were satanic worshipers, but because they died of a slow strangulation over a ten minute period. They blame Pearl and are haunting her, as her spirit found this building appealing, which was the nearest place where she died.

The entity of Buck Brady – The Cincinnati mob of course wanted to take over The Primrose, and wound up making life rough for Buck Brady, until they finally forced him to sell his business to them. He committed suicide.

The entity of a little boy – Some little boy annoyed the mob thugs during the time when The Latin Quarter was in operation. They threw him down the stairs, killing him.

The entity of a little girl – Died in this building somehow, perhaps a dumb kid accident, or maybe a sacrifice victim.

The entity of Johanna, daughter of one of The Latin Quarter owners – She fell in love with a singer at the club, and became pregnant. Her father had her beloved murdered. At five months pregnant, she tried to poison her father, and then killed herself in the basement. 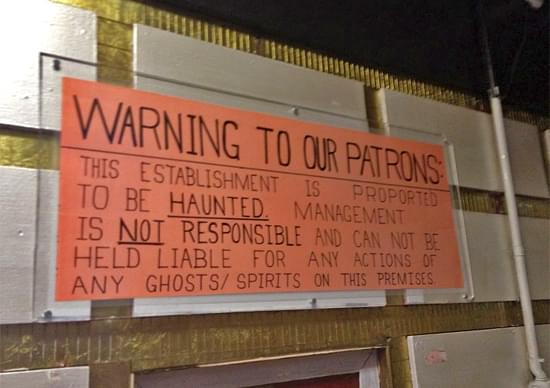 Apparitions have been seen, and other occurrences point to unseen presences.

The entity of Alonzo Walling has appeared.

An apparition of a headless woman (Pearl) has appeared to people.

A psychic has seen Scott Jackson yelling at the headless Pearl, saying that it is all her fault. Pearl is fretting, as she holds her head in her hands, “My head, my head!”

The entity of a little girl appeared in the basement, and threw rocks at the living.

The entity of a boy, victim of the vicious thugs, appears in the basement as well.

The entity of Joanna has been seen by the living on stage right behind Bobby Mackay when he is performing with his band. She has been seen in other places around the building as well. Her floral perfume is also an aroma experienced by the living.

Water faucets turn on and off by themselves. Lights have a mind of their own as well.

When the wife of an employee walked into the building, the unplugged juke box began playing, “The Anniversary song,” which wasn’t even in the juke box. A romantic entity was at work! Perhaps Pearl?

Some spirits have been known to be bullies, rabble rousing and downright menacing.

Many rough characters visited/worked on this place of entertainment while alive, and being dead hasn’t improved their behavior.

Pregnant women are picked on by Johanna: Right after Bob and his pregnant wife, Janet, bought the building, she became the object of harassment by Johanna, to the point that she almost miscarried. One such incident: She was grabbed around the waist and thrown down to the ground. something pushed her from behind as she scurried down the stairs. She heard a disembodied female voice yelling at her, “Get out, get out, get out!”

Carl Lawson, the former caretaker, was possessed by the spirits and underwent an exorcism in the early 1990s. Ghosts have been seen by psychics hanging around the mechanical bull area and the caretakers’ apartment.

Entities have been known to start fights in the night club by poking, touching people and pulling hair for chuckles.

It certainly is true that Bobby Mackey’s Music World has quite a few strongly opinionated, sometimes rowdy spirits who let the living know when they disapprove of changes made, or music presented, or even outfits worn by patrons, in very blatant ways.

This sign which is posted on the front door warning their patrons about the ghosts was advised by the Bobby Mackey’s Music World’s lawyers after a patron’s clothing was ripped in the bathroom by a disapproving entity, dressed in a cowboy hat.

When a set up person accidentally dropped a chair, pounding coming from the catwalk continued until she fled. What an unforgiving peanut gallery!

A loud, animated band irritated the entities, who showed their displeasure by throwing things from the ceiling, sort of like throwing tomatoes at a bad act! A long time patron began to get phone messages on his cell phone. A disembodied female voice pleaded for the band to leave! He saved the messages and turned them over to a paranormal investigation group. 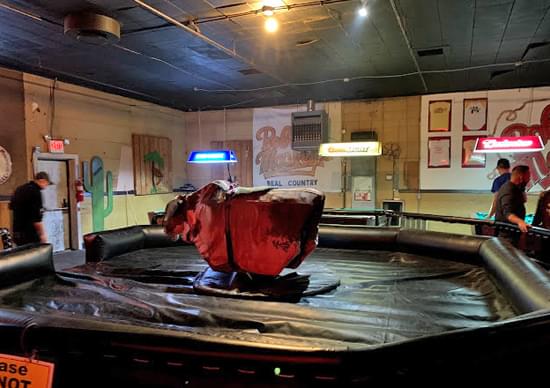 Quite a few paranormal investigators have come to investigate this building and have come up with evidence to support the host of ghosts who dwell here. 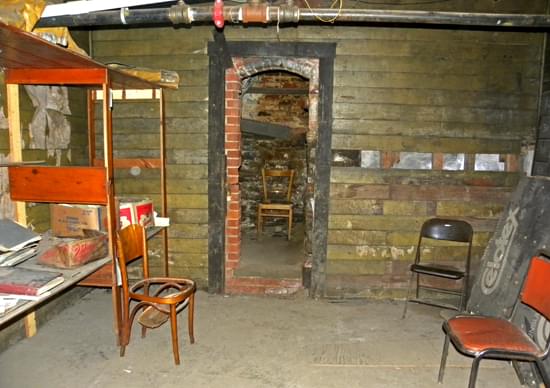 The Wilder city area is right across the river from Cincinnati, Ohio.

Bobby Mackey’s Music World is located on a main artery road which is an exit off of the 275/77. Turn left and go north on Licking Pike, which runs parallel to the Licking River. This road goes by a golf course, by the turn off for downtown Wilder, by the left side of Wilder proper, by the suburbs and finally ends in Newport. When you are nearly to the outskirts of Newport, but still in Wilder, one can see the rather funky, long rectangular wooden structure on the left side of the road, which is the home of Bobby Mackey’s Music World, a tavern and night club, with a rather violent past.