A defiant daughter who suffered death for her
disobedience does the same forbidden activity every 7 years. 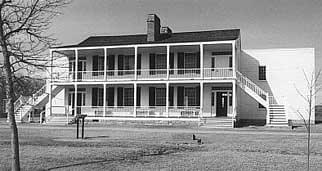 Around 1850, Fort Laramie, located in the state of Wyoming, was a trading post, run by the American Fur Company, who sent their agent there to run the place, on this then wild and dangerous frontier post. The agent brought his daughter with him as well. The daughter had been educated in eastern schools, and was an accomplished equestrian who was into speed; loved to ride fast. In order to stay with him, the young woman had to promise her father that she would never leave the safety of the post without an escort.

The father’s assistants were given the job of keeping tract of his headstrong daughter, and making sure she obeyed her promise to her father. However, feeling that her father’s rule was silly, she slipped out on her favorite black horse for a fast ride, when her father was called away from the post.

The assistants, seeing her go, chased after her, calling to her to stop, and wait for them. Unfortunately, she ignored their calls, and foolishly raced her horse down the Oregon Trail, never to be seen again alive. It is speculated that she might of met foul play, or lost her way & starved to death, or perhaps drowned in the nearby river. Her body or her horse were never found.

Every seven years, since 1850, when the original tragedy happened, a lady equestrian apparition, dressed in green, and riding a fine, coal-black stallion is seen riding at break-neck speed, east of Fort Laramie, along the old Oregon Trail.

One afternoon in 1871, Lt James Alison had some time off from his duties at Fort Laramie.

With some other officers, they went on a wolf hunt

Lt. Alison outdistanced his fellow wolf hunters but had to stop when his horse picked up a rock in its hoof.

When he looked up, he suddenly saw a woman rider on a big black horse approaching incredibly fast , crossing close to where he stopped.

She was wearing a long, green riding dress, with her dark hair tucked up under a veiled riding hat.

This speed freak was whacking the horse’s flank with her sparkling jeweled whip to inspire even more reckless speed.

Evidence of What She Was

Lt. Alison immediately gave chase to this wild horsewoman, but found she had vanished into thin air after he had followed her up a small hill, that gave him a terrific view at the top, of the flat, treeless land that existed in all directions.

He suspected then that she might be an apparition because there were no tracks left by her horse, and he had heard no hoof beats.

He also noticed that his brave, gutsy hound was now cowering, with hackles raised, slinking behind him in fear.

After hearing about the Lady in Green’s sad story from his commanding officer, and that she indeed has been seen still riding the land around Ft Laramie, Lt. Allison did some follow up investigation.

He talked to an elderly Native American woman. She had actually lived close to the trading post, and was an eye witness to the daughter’s folly, and saw her go off on her “fatal ride.”

She confirmed that the Lady in Green’s tragic story was true, and that other Native Americans and trappers had seen her apparition as well.

Many years later, while Allison was riding a train across Wyoming, he heard cowboys talking about a rancher in the Ft. Laramie area seeing the Lady in Green, riding pell-mell on her coal black horse.

Yes. She still seems to appear every seven years. Her last appearance was in 1997, and her next appearance should be in 2004.