Skip to content
More From Cheyenne More From Wyoming

Human panic created a restless spirit in their bell tower…

The spirit of a former Father has a retirement plan here. 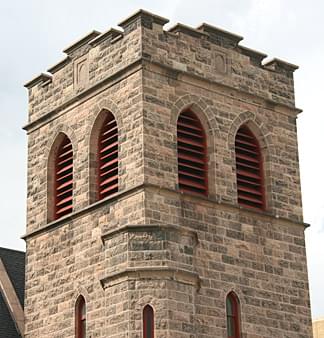 In 1868, the main part of this church was built. In 1886, the people wanted a more “imposing house of worship, and wanted a grand bell tower built as well, like the great British churches. The foundation of the bell tower wall was sunk 15 feet deep, to support the later to be 60 ft massive structure, with walls 4 feet thick. The building of the tower was stopped for a long time because the masons working on it disappeared.

When building the tower was finally started again and finished in 1927, a room to please the tower ghost was added, just below the eleven carillon bells, that weigh 20 tons. This ghost room has an inlaid wood floor, and big gothic windows that surround it. The ceiling is hand-plastered, with a chandelier hanging from it. This special room can only be reached by climbing an 85 ft spiral stairway, which starts in the church basement. 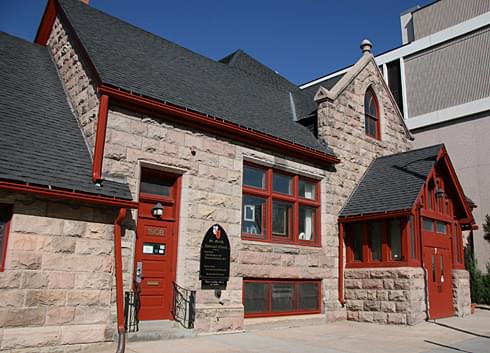 As no one local in 1886 had the skill to do the quality of stone masonry required for such a grand effort, two Swedish immigrant masons were hired to do the job. While they did a great job laying the foundation, they only built part of the tower, before both men disappeared.

One morning, the church’s rector, Dr. Rafter, stopped by to ask if any more cement or stones were needed. He noticed that only one mason was there and he was quite nervous and agitated. The next day, no one showed up for work, so the unfinished tower became a study room for the rector, after they put a roof on it.

In 1966, a very old man confessed to Father Todd, the then present rector of St. Marks, that when he was a young man, he and a fellow mason were hired to work on the bell tower of Saint Marks Church. When his fellow mason slipped and fell to his death, he panicked and stuffed the body in an unfinished section of the wall, bending it so it would fit in the curvature of the wall. After putting a thick layer of cement over the body, he placed stones over the body, sealing it in the wall.

Activity started to happen soon after the study room was completed.

A popular Denver psychic, Ms. Wright, saw an elderly white-haired man who walked with a cane. He was later identified as Father Rafter

Spirits in the Church’s Graveyard

In the tower, Ms. Wright saw little blue lights dancing around the church gravestones below.

This study room, made from the unfinished bell tower in 1886, was anything but quiet, as the new rector found out.

What was described as hammering beating, and muffled indistinguishable talking came from the walls.

For a while after that, the room was sealed. Then a pipe organ was put in there.

In 1927, when work began again, some of the masons heard the sounds of hammering beating and muffled indistinguishable words coming from the newly made stone walls.

(This caused great fear and dissension among the workers, bringing the construction to a halt. The foreman went to Father Bennett, with the idea to build the ghost its own room, as the men felt this would please this ghost.)

Sometimes church goers heard jumbled words still, but one sentence came out quite clear. “There is a body in the wall.”

Halloween Broadcast in the Tower

A popular Denver psychic, Ms. Wright, and a deejay from a Cheyenne radio station tried to spend Halloween night, broadcasting from the tower.

As Ms. Wright climbed the stairway, she was overcome by dreadful feelings, as she sensed the presence of a frightening, upset apparition, the spirit of the Mason.

A sense of fear and foreboding came over Ms. Wright again when she saw tiny blue lights climb the stairs to their room.

A slimy substance began to ooze from the room’s baseboards.

All at once the carillon bells began to ring by themselves. Over the ringing, a rough man’s voice shouted at them, “Get out while you still have your mind.”

Within 15 minutes, all made a hasty exit from the bell tower, escorted out by Father Todd and the radio manager. The bells began to ring again.

After a thorough search by police, no human pranksters were found, and there was no logical explanation for the ooze, the lights, the voice or the impromptu bell ringing.

The floor was white with a dust-like substance, that wasn’t there when they first entered the room.

According to Ms. Wright’s research, it definitely still is.

1) The Bell Tower is haunted by two spirits; The mason who is buried in the wall, and by Father Rafter.

2) Ms. Wright doesn’t feel that the spirits inhabiting the bell tower are evil, just upset to have the living intrude in on their peace that they find in their special room.

3) Father Todd feels that this beautiful church is filled with the spirits of many deceased church members; men, women, and children, whose lights were seen by Ms Wright as she looked down on the gravestones in the church graveyard.

Tours of the bell tower are no longer offered, to keep the living out of the spirits’ much loved private chamber suite.

St. Mark’s Episcopal Church can be found on 19th street and Central Avenue in Cheyenne, Wyoming. 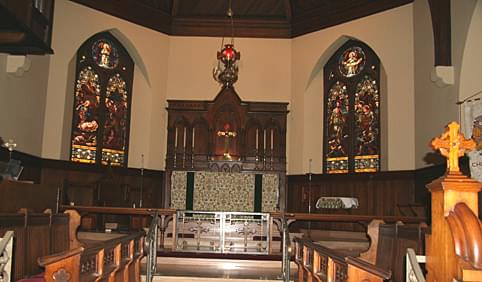 Haunts in Cheyenne Haunts in Wyoming