A male entity has an appreciation for merchandise and women.

These two buildings were both built in 1889, but are very different in aura and color. The Hastings Building is a most lovely, four story brick and stone structure with blue trim. It was made complete with gorgeous bay windows, fancy, intricate stone work; all done in the elaborate Victorian style. It has been called the most beautiful building in downtown Port Townsend.

The Hastings Building is described as “an elaborate building with three stories and a basement, that cost $35,000-45,000 to build in 1889,” which was quite a chunk of change in those days. As of 2012, it is still owned by Lucinda’s descendants. While the first floor has small shops as tenants, the second and third floors are empty for the time being, in need of some renovation. Most of the restoration of this building has been the outside structure up to this point in time, and it looks stunning, a real eye-catcher!

The James and Hastings Building has been completely renovated and restored, enjoying full occupancy. It can be described as being another huge rectangular solid brick and stone, three story & a basement building. It also is decorated with handsomely carved stone trimmings around the Victorian era windows, and at the top of the building as well. The customary dentils along the roof line are well done. All the stonework is painted a lovely gold, that looks quite fantastic with the bricks. While not as intricate as The Hastings Building, it is still a truly glorious, yet a sensible, handsome Victorian commercial/residential building, that has benefited from the efforts of past owners. 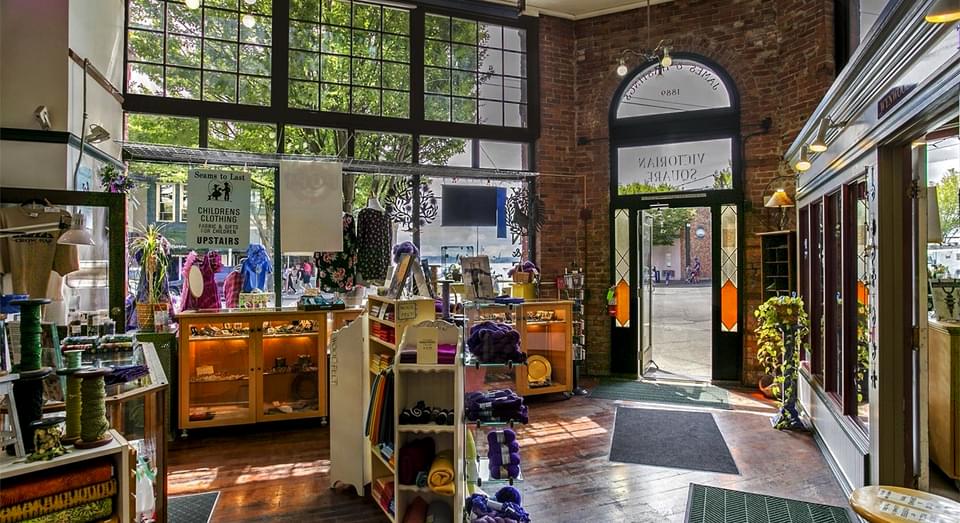 During the 1990s, and early 2000s the past owner, Keith Jackson, did major restoration and repair work to the outside of this structure. He sold it to the current owners, JSW Group, who gave the first floor businesses a face-left inside, and renovated the inside space of the second and third floors as well; making attractive, residential in-town condos/apartments. This impressive commercial Victorian building now has a restaurant and various retail shops on its first floor, and has residential tenants occupying the second and third floors.

It is truly a beautiful building, that has long been used for mercantile/offices/restaurants/hotels/and residences, that was built to last a very, very, long time. The people of Port Townsend value their Victorian buildings, and have preserved both uptown and downtown Port Townsend; reaping the financial benefits of having a healthy tourist trade; very much like the town of Cape May, in New Jersey. Residents from Seattle and Puget Sound communities also love to come to Port Townsend to enjoy all the businesses, entertainment, and the festivals that are held here.

The land upon which this grand building now sits, was the location of the first two room log cabin in Port Townsend, built by two hardy pioneers, Alfred A. Plummer and Charles Bachelder, in 1851. A few years later, a dry-goods store replaced the log cabin, as Water Street was turning into a commercial center for the people of Port Townsend. This dry good store was replaced during the economic boom of 1889, when business partners; mover and shaker Francis James and Lucinda Hastings, widow of rich merchant Loren B. Hastings, invested their money in a deal that built this glorious James and Hastings Building. Between them, they “invested” a chunk of change, which has turned out to be a wise investment, for The James and Hastings Building’s beautiful structure and ideal location has attracted many businesses to its doors, as well as tenants who rent spaces as offices and lodging throughout the years.

As Loren B. Hastings made his fortune through his mercantile business, The L. B. Hastings Company, it made sense in the beginning that main tenant on the first floor would be Smith & Ellis, that offered in their store clothing and dry goods, hardware, stoves, tin wear, boots and shoes. As The L. B. Hastings Company made lots of money selling hardware, steam-boat supplies, logger’s supplies, tableware, etc., this was a good choice for a tenant, as well as being in the downtown commercial area. Other smaller businesses also rented space here.

In 1889, The floors above the mercantile store were used as offices and lodging opportunities. In 1890, offices for companies such as Smith & Ellis, City Surveyors and Civil and Mechanical Engineers, Port Townsend Gas and Fuel Company, and L. B. Hastings & Company were located in the upper floors. In 1897, J.J. Fenton, the liquor merchant, had a saloon and club rooms in the building. 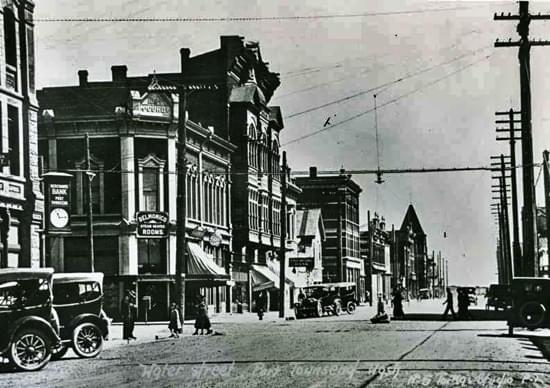 In 1900, the building changed from businesses and offices, to being a hotel, restaurant and bar. The Vienna Hotel and Bar opened in the main floor, and some of the upper floors. The German Embassy is said to have moved into some of the office space as well, for a limited time.

This establishment, The Vienna Hotel and Bar evolved into The Olympic Hotel, by 1920. In 1921, The James and Hastings Building was placed back on the real estate market, and it was readily bought by a Portland businessman, J. F. Canady.

By 1930, offices and businesses were once again drawn back into this handsome building, and they consistently stayed throughout the decades until the building became a major fixer-upper opportunity. As to be expected, by 1970, it was in need of a boatload of money to restore it to its former glory. While owners of this structure have always done their best to keep up with the building’s issues over the years, it was a loosing battle after a certain point, for not enough money was coming in to support the major restorations and renovations needed to attract present day businesses and rentals of space.

Fortunately for The James and Hastings Building, and many other structures in the downtown and the uptown area as well, the people of Port Townsend loved their old Victorian buildings, and found ways with the help of the local, state and federal government, to raise/borrow money to help independent owners restore and renovate their town’s historical treasures.

In 1976, The James and Hastings Building, along with many other structures in town, was designated a National Landmark. In fact, the city of Port Townsend was designated a Historic District by The National Trust for Historic Preservation. 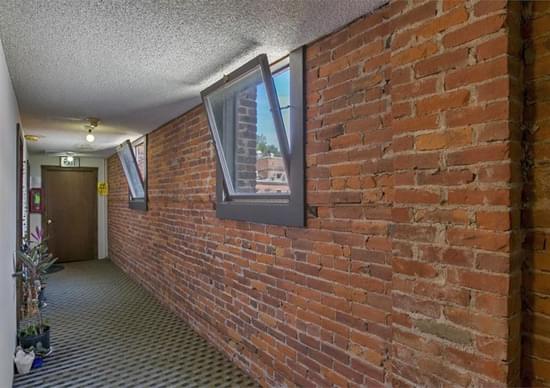 In 2003, Keith sold this now handsome building; (at least from the outside), to the current owners, JSW Group, who renovated all the insides of the building. The first floor got a major face-lift, and the second and third floors were transformed into attractive, residential in-town apartments/condos.

The James and Hastings Building is now a fully viable, great investment, as all three floors, and perhaps the basement are productive and occupied. This impressive, commercial Victorian building not only has a restaurant and various retail shops on its first floor, but has residential tenants occupying the second and third floors, in the heart of downtown Port Townsend.

Yes, indeed, The James and Hastings Building is very attractive to people in this world today, and it seems to have attracted a male entity from its past as well.

Here are a list of possible reasons why the male entity is haunting this building, for your amusement.

Entities who once lived/worked in a structure that was torn down, to make room for another building structure, sometimes just attach themselves to the land itself, and just move into the new building erected.

The James and Hastings Building was constructed on the former location of a two room log cabin, and then a dry goods store.

Either one of the male early settlers who lived in the log cabin would be thrilled to see all the items for sale, and probably would still have an eye for the ladies.

Anyone who had an attachment to the dry-goods store may also be present, and may have his own ideas as to where the merchandise should be displayed. He also may have an appreciation for women.

The restoration and renewing of old, historic buildings can entice spirits who loved the building back into this world to continue to enjoy things that they used to while alive in a limited basis, even if its just reliving their memories. It can be a recreation memory, or being in charge of a business, or enjoying all the personal relationships that took place in the structure.

This entity became interested in this world again, when new owners, JSW Group, renovated and restored the inside of all the floors, starting in 2003. 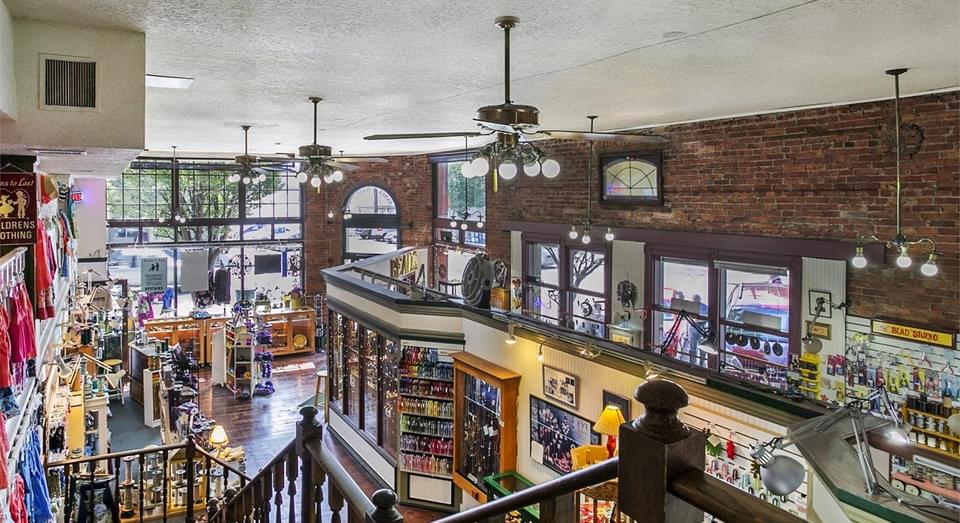 Spirits like to be noticed by the living and get their chuckles from the people in this world around them as well, by playing tricks, moving stuff, and do other things like opening windows and doors, and playing with the lights.

This male entity wants the store owners aware of his presence, while getting his own personal chuckles too.

Men who were playboys and enjoyed many women / or who were gentle and kind toward women while alive, continue to do so even in spirit-form. Personalities continue on when the spirit leaves the body.

Before 1921, There was a large mercantile store; Smith and Ellis, a liquor saloon and club rooms, a hotel lobby for the Vienna Hotel and bar which became the Olympic Hotel in the main commercial space on the first floor. After 1921, the whole building reverted to retail on the first floor, and the upper levels were dedicated to business purposes. Recently in the 2000s, a restaurant and probably a bar was added to the first floor, along with the retail shops. Residential condos were also constructed on the upper floors.

Perhaps a patron, a staff member or owner of any of these enterprises that occupied this building fancied himself a ladies man, and still enjoys to make contact with women to his liking. It also explains the other paranormal activity report

Nice living spaces on the upper floors could draw in either an old hotel guest or people who worked in the offices from another era, that like to shop for items and women.

Here are a list of possible reasons why the male entity is haunting this building, for your amusement.

He is described as being mischievous and very appreciative of females.

This entity likes to visit all the unique retail shops that reside on the first floor: Perhaps he likes to view all the merchandise.

Moves items around the store, in the spirit of helping the staff, or perhaps to let them know of his presence.

Opens the windows; perhaps a sign of an owner, wanting some air in the structure.

Pays friendly attention to the female patrons who shop in these stores, though doing no harm. 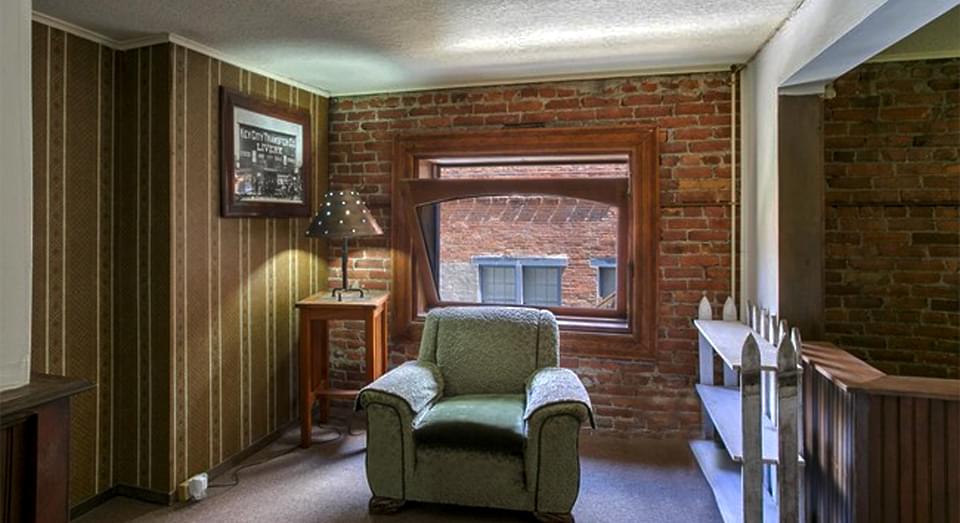 Probably so, though more evidence should be collected or experienced to fill out this male entity’s description, as this entity is relatively new to the scene. Just recently, in 2003, he started to be active in our world, and not much is known about him. Store owners, their staff and some of their female customers have experienced this mischievous, yet charming fellow who likes to be noticed, and perhaps tries share his thoughts on how things should be arranged.

Plenty of personal paranormal experiences have been reported by the building’s retail staff and owners, and their female patrons. However, I couldn’t find any hard evidence posted on-line by anyone. Perhaps a private investigation was done, but not allowed to be made public, as they don’t want to scare people away, after going to so much trouble and expense to transform this building. 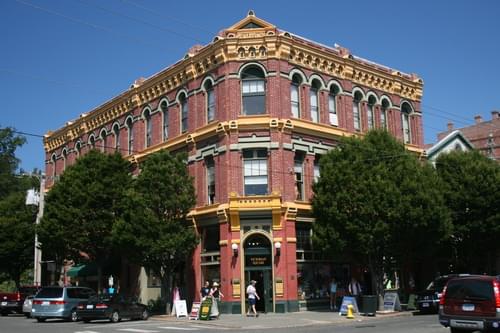 The James and Hastings Building is located on the northeast corner of Water and Tyler Streets.

I was in “The Twilight Zone” for a while, until I stumbled upon The Port Townsend Historic Building Plague Project Booklet, found on-line in PDF form! I was glad that my cloud of confusion and frustration about the address of the James and Hastings Building had been finally lifted! 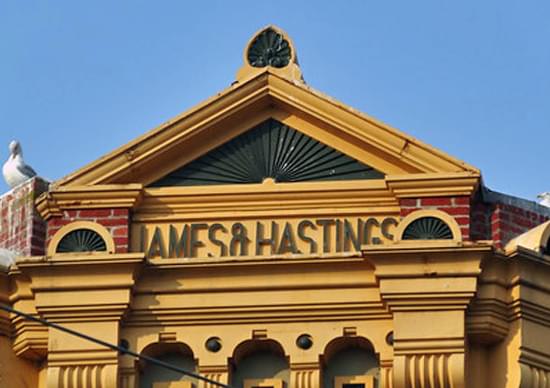