A military couple still occupies because they enjoy the historical decor.

Fort Worden was named after U.S. Navy Rear Admiral John Lorimer Worden, commander of the USS Monitor during the American Civil War. This 433 acre state park not only has the preserved buildings of this former Army Artillery Post, but offers lots of opportunities for recreation, offering hiking trails, picnicking, kayak and bike rentals, and a camping ground as well.

The Commanding Officers Quarters Museum was built during the years;1897-1902, and is handsome Victorian/ Edwardian house that was very suitable for a commanding officer of such a large Army artillery post. Many different families lived here. This house is considered one of Fort Worden’s finest buildings, offering a lovely normalcy of civilization at a time when this part of the state was pretty rustic. 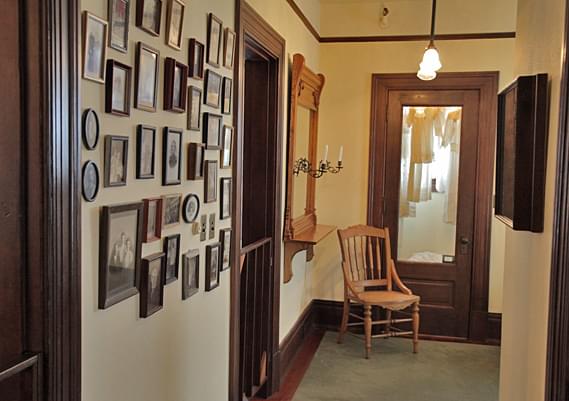 As a museum, it gives a great historic look back into time, showcasing a way of life of the Commanding Officer and his family lived in the early 20th century. This two story, with a basement structure has a lovely wrap around front porch, and the usual common rooms found in a home built in this era, but designed very beautifully and special for the commanding officer and his family.

The outside of the house was morale-boosting. The roof is made of cross-gabled slate, with fancy chimneys, and decorated boxed cornices. Inside, perks included having 6,000 square feet of living space, fireplaces in the parlor, dining room and study, and built-in cabinets in the dining room, with lovely glass doors. The pressed tin ceilings are 10 ft high. Pocket doors offered privacy, and Palladian windows and brass chandeliers offered an upper class aura.

All the light fixtures that were put in would work for electricity, because it was known that electricity was due to be offered to the area. However, from 1904-1907, oil lamps were used until electricity was made available, in 1907.

Tom and I enjoyed the self-tour of this lovely house. It seemed like the Commanding Officer and his family just left for a stroll. The dining room, the parlor, the kitchen, the study, and the upstairs area are all very authentic, like a historical house museum should be presented. The details of life so long ago were on display in the furnishings, and tools of life found throughout the house.

Also, mementos of army life, like uniforms, photographs, and metals, are on display throughout the house as well.

During the Christmas season, this house is highly decorated with Victorian decorations and is quite a tourist draw. People also rent the other houses on Officer’s Row for a family holiday, and cook their festive meals, etc.

Fort Worden was established in 1889; to be part of the Coastal Defense System. The small outfit of soldiers that were first stationed here in this rustic outpost lived in tents, on top of Artillery Hill, and probably in the areas down the hill as well. 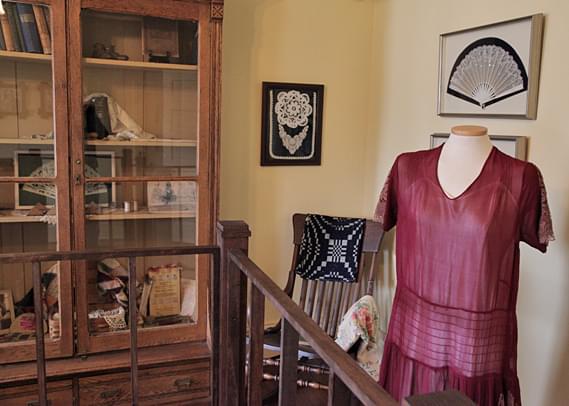 With the exception of The Commanding Officer’s Quarters, the first of the existing buildings seen today were not built until 1902-1904, when the Federal Government declared Fort Worden to be a major Army installation; to be the headquarters for the Puget Sound Harbor Defenses, a U. S. Army (Coast Artillery Corps) Fort. Fort Worden was the “strategically important position in the triangle of defensive forts constructed to protect the entrance to Puget Sound and to safeguard the naval shipyard at Bremerton.” Fort Flagler and Fort Casey were the other two defensive forts, and the three of them were in place to protect the entrance to Puget Sound; from possible attack of enemy ships or submarines.

Beginning in 1905, the 126th, 30th, 62nd, and the 108th Coast Artillery Companies were stationed at Fort Worden, after the first 23 buildings were constructed around the parade ground in 1904. Enlisted men lived in the buildings along what is now called Eisenhower Ave, and the officers lived in the houses across the parade field along Pershing Avenue. By the time the construction was finished, Fort Worden was like a small city, with not only living quarters established, but also 228 main buildings such administration buildings, kitchen and mess halls, a bakery, a chapel, a guard house and jail, hospital, power house, signal station and wharf. While Port Townsend offered the delights and conveniences of civilization, this Army base offered its residents a self-contained place that offered everything that was needed.

Fort Worden was an active installation through both the world wars. Sonar was added, to detect German subs as well. During WW 2, Fort Worden swelled to 700 people as it was a facility for basic training for soldiers heading for either the European or Asian theater.

When Fort Worden was deactivated in 1953, it didn’t stand empty for long. On July 1, 1957, the State of Washington purchased most of the Fort Worden property for $127,533 for use as “a diagnostic and treatment center for troubled youths.” This juvenile treatment center helped troubled kids until 1970. The kids stayed in the barracks, and the personnel stayed in the old houses along Officer’s Row.

By 1970, the juvenile treatment center found newer accommodations and vacated Fort Worden, but it wasn’t vacant long! On September 30th, 1971, The Washington State Parks and Recreation Commission bought most of Fort Worden, with the idea of demolishing the buildings and artillery bunkers and guns. Oh NO!!!! This wasn’t a good development! 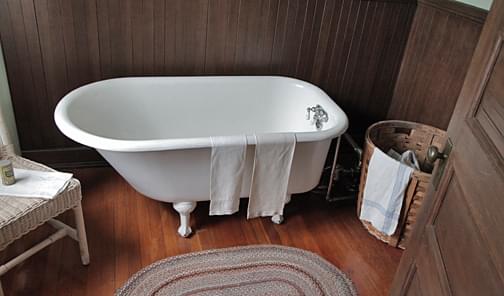 Luckily, the cost to do so was prohibitive, as there was an exorbitant amount of cement up on Artillery Hill. So, another plan was developed to just upgrade the buildings and houses with modern facilities, rent them out to groups, and offer historical museums in some of the buildings. It was a much better plan, that pleased everyone, and inspired the historical enthusiasts to seek protection for not only the fort but the town of Port Townsend, and its many Victorian buildings. Whew!

The Commanding Officer’s Quarters was restored by volunteers, during the years of 1970-1980. As each Commanding Officer who was stationed here would’ve brought his own furniture, Victorian furniture was borrowed from The Jefferson County Historical Society and the state of Washington.

The Washington state government made good use of the acreage, not only preserving this important slice of history, but providing many opportunities for people to enjoy the property as well as learn from its various museums and in a variety of programs as well.

There is a Coast Artillery Museum, The Commanding Officer’s Quarters Museum, and The historic Point Wilson Lighthouse offer opportunities to review the history of yesteryear. Other opportunities to learn are offered through events and classes provided by The Port Townsend Marine Science Center, Madrona MindBody Institute, Third Ear Project, Corvidae press, A Branch of Peninsula College, the west coast campus of Goddard College, Centrum and The Port Townsend School of Woodworking.

Spirit seekers are welcome, and have caught evidence even in broad daylight. Ghost hunter and paranormal conferences are held here, and many of the buildings, cemetery, and the old artillery bunkers have been investigated by a variety of ghost hunters. 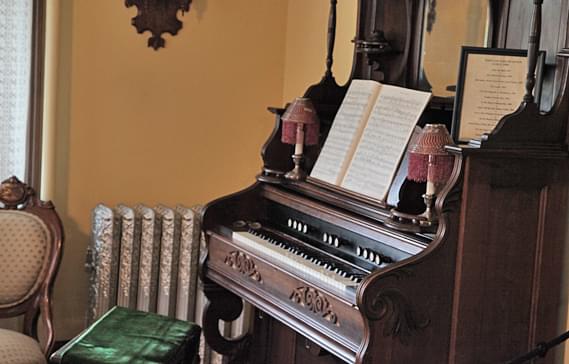 When old military installations are renovated, restored or reconstructed historically, even when they had been completely destroyed, can act like an environmental trigger and draw spirits back who loved their service there, or had life-changing experiences for their good or that led to their demise.

Spirits began to make themselves known after the Fort Worden Park was opened in August of 1973.

Many of the houses along Pershing Avenue have resident spirits from the base days, including Fort Worden Commanding Officer’s Quarters.

Sometimes entities find ways to tell the people in this world how they died.

Smells noticed in Fort Worden Commanding Officer’s Quarters Museum may hint at the kind of injuries or death the entity or entities had experienced.

Sometimes a spirit person will form an attachment to something that was of great value to them when they were alive in this world. Sometimes they like to come back and visit this item, or perhaps even attach to it.

Besides all the military items that are on display, all the furnishings were also brought in to create this historical museum. 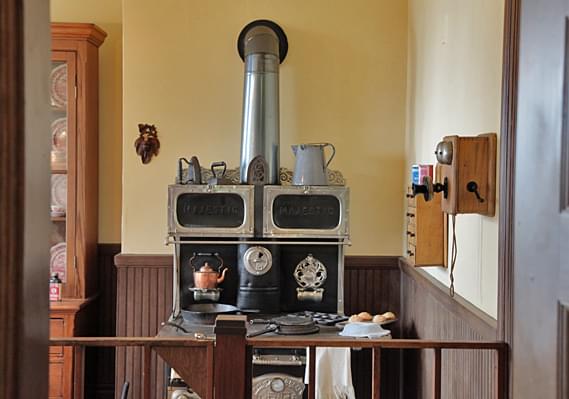 The distinct smell of burning coal, burning rubber, and/or hot sulfur has been noticed in the front area of the house, inside the front door.

A photo was caught of a spirit in purple clothing, and the face can be seen in the mirror. 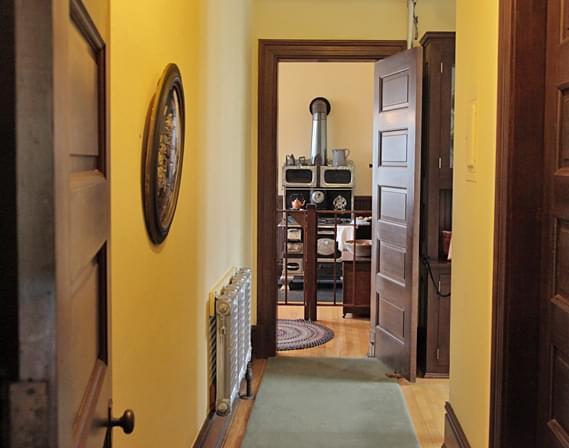 Most Probably so, by one or more entities; possibly a military officer and his wife. Who they may be is unknown, as the entities who reside here are disciplined and don’t interact too much with this world; at least not much has been made public.

There maybe a lack of published evidence, but the aroma by the door, and the picture caught on film by Tomasina Doran strongly suggest that something is here, keeping the staff and visitors company!

Tomasina Doran, who was a member of the paranormal investigation group, Seattle Ghost, told me in an email: “We were on an investigation and had spent a few nights there Halloween a number of years ago. It was a great investigation and we came up with lots of evidence that Fort Warden is extremely haunted.”

The picture caught by Tomasina shows an apparition in purple, that she reported was a male, but he seems to be talking to someone, perhaps over by the desk.

Personal experiences: When I went up to the second floor of this lovely house on the self-tour, I became slightly dizzy and tingly, that told me that there was an entity or two who were present. 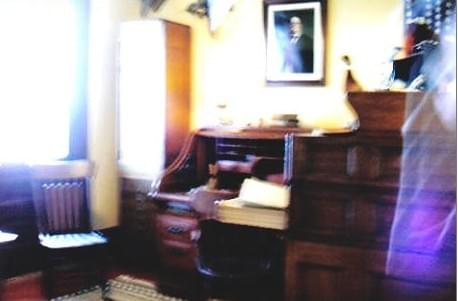 Fort Worden Commanding Officer’s Quarters Museum is located at Fort Worden State Park & Conference Center, on Pershing Avenue which also has 12 of the other houses used for Officer Quarters.

It is the first house seen from the corner of Pershing Avenue and Harbor Defense Way, in the very southeast corner of the Parade Grounds. Fort Worden Commanding Officer’s Quarters Museum offers a fantastic view of Admiralty Inlet, with Mt. Baker and the Cascades in the background. 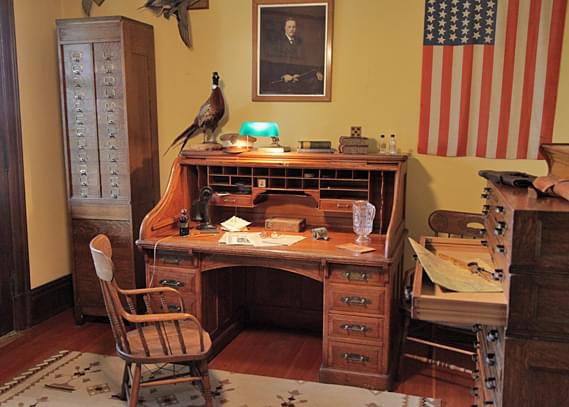 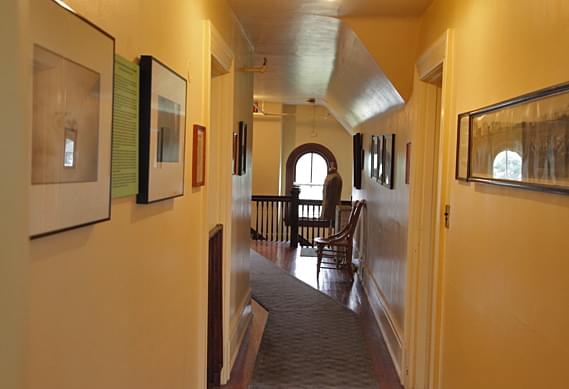