21 stately Victorian Mansions have been restored
and renovated as both private homes and commercial places.

This has encouraged former
spectral residents in three of these mansions to move back inside, sharing.

Some entities like to supervise, imbibe
drinks, or come up with other amusing activities.

Officer’s Row is located on a lovely, large grassy area with trees, gardens and sidewalks, with plenty of room between the 21 stately Victorian mansions with the standard 2 – 3 floors and perhaps a basement. These were built to house the families of soldiers and officers stationed at Vancouver Barracks, over the years when this was an active Army establishment. 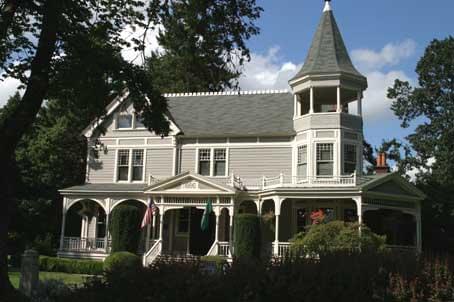 Over the years, time wasn’t kind to these mansions, especially when the army officially moved out and these once proud homes were then referred to as “21 white elephants nose to tail.”

However, they were listed on the National list of Historic places, got a new lease on life, and were renovated and revitalized when funding became available.

They are now owned by the City of Vancouver and known as Officer’s Row. They are under the management of Key Property Services, who rents the buildings and property as townhouses and business offices.

Now, some of these homes have a new purpose; housing local businesses while others still remain private residences.

This 366 acre Reserve which also includes the Vancouver Barracks, Pearson Field and Fort Vancouver, is considered to be the most “historically significant site in the Pacific Northwest.” Over 50 years of archeological excavations have produced a collection of 1.5 million artifacts.

From its early beginnings, Fort Vancouver was an important establishment involved in the settling of the Northwest. The Fort originally was first established by the British, as a trading post. British owned Hudson’s Bay Company moved its western fur trade headquarters operations to the fort, which did a lot to establish Vancouver as a diverse growing community made up of almost a 1000 people, attracting French Canadians, Hawaiians, scots and members of over 30 different American Indian tribes.

In 1846 the United States government and Great Britain signed a treaty that established an international boundary at the 49th parallel, which allowed the Americans to build their Army Fort Vancouver directly across from the Hudson’s Bay Company’s Fort.

Beginning in 1849, Fort Vancouver existed as an Army and military administrative headquarters for the Northwest for 150 years, defining the border of the United States. Vancouver Barracks was established in 1849 to defend settlement of the Oregon Territory, offering protection and help for the people living there and for the new settlers coming west on The Oregon Trail. For 11 years, they co-existed with Hudson Bay Company, which got a little prickly between the two. The area that the Army was using slowly spread, even usurping part of a colonial graveyard for a parade field/and housing area.

Finally in 1862 Hudson’s Bay Company threw in the towel and closed down their business in Fort Vancouver and departed for Victoria, leaving it all for the Army and ever increasing numbers of settlers. This Army post was active during the Indian Wars, the Philippines and both World Wars.

HISTORY OF THE GRANT HOUSE

This mansion has the distinction of being the first commanding officer’s quarters, Ulysses S. Grant, who was stationed here as quartermaster in the 1850s. (This famous Civil War general became President after the Civil War.) It started off as a log cabin. It became a grand square building, with a covered verandah which stretches all away around the outside of the mansion, on both the first and second floor. This mansion was used as the officers club before it became Grant’s residence. It became the commander’s home on base for many commanders who came after Grant. Today this building houses the Grant House Folk Art Center – open Mon.-Sat. ( 11am to 3pm,) and Sunday 10am to 2pm (admission is free). Also Grant House Restaurant serves lunch to hungry visitors.

An entity by the name of Sully has made himself known to the living. People have heard him and felt his strong presence. Likes to supervise in the restaurant. The restaurant has information posted about their ghost.

Admiral Paul Nelson Mansion – A private residence. Some of the mansions are privately owned by people who take a dim view of ghost hunters/seekers. Respect their privacy or you will be arrested!

On Saturday, Sunday, Monday or Tuesday, blood drips from the walls and the grass keeps dying and coming back to normal, so reports a local newspaper.

Possible reasons for the hauntings:

One always wonders, why buildings and structures have entities attached to them.

When buildings are renovated, the entities which have attached themselves to the structure become active, perhaps thrilled that the living have come to their senses and are fixing up the place, or perhaps annoyed that repairs aren’t to their standards, or maybe even just going about their business as usual, choosing to make their presence known to the living.

It is also thought that several homes in Officers Row was built on top of colonial grave sites, which isn’t a good idea. Sometimes entities get a little hot under the collar when the living build on top of their eternal resting places.

The stately Victorian Mansions known to be haunted, now are home to the following businesses, except for one, which is a private home. 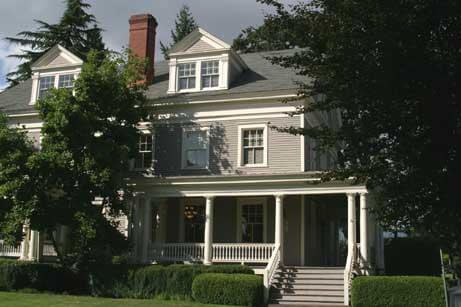 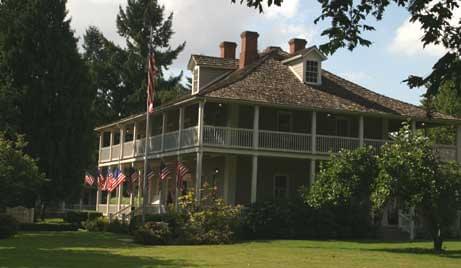 Admiral Paul Nelson Mansion – Located 2 houses down from the Grant House. Do not bother the tenant. (not pictured)

* Entities became lively after the homes were renovated to accommodate businesses moving in.

* The living now occupying these homes have felt Unexplained Cold Spots, heard footsteps, and have been touched by unseen hands.

* Doors open and close at will.

* Unplugged telephones manage to ring by themselves.

* The entities love their coffee, and feel free to help themselves to any freshly made coffee, sometimes before the living get a chance to have some.

The living have adjusted and are sure to make some extra!

Entities co-exist with the living. 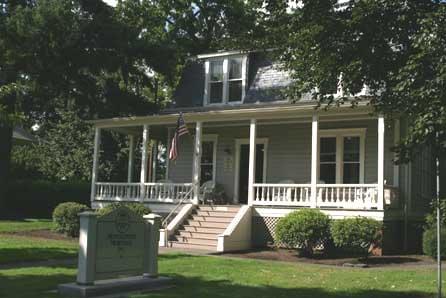 Officer’s Row Location: The city of Vancouver can be found on the north bank of the Columbia River, directly across from Portland, Oregon. Officer’s Row – is located on the very north part of the Fort Vancouver National Historic Site, which can be found in the heart of downtown Vancouver.