Skip to content
More From Park City More From Utah

A once aspiring actor that was burned alive is
the slightly resentful long-time spirit who is active.

The Egyptian is a three floored, proscenium-style theatre, featuring Egyptian inspired architecture includes lotus leaf motifs, scarabs, hieroglyphics and symbols of life and happiness. It has seating in its auditorium for 266 guests and an additional 16 seats at its cabaret tables. The third floor has a “carpeted hospitality area” which has room for 125 people.

Many events take place within its walls.

1) This 1922 Egyptian Theater is described on their web site as offering “Off-Broadway style” live theatre in Park City. It is the home theatre of The Egyptian Theatre Company, an Actor’s Equity small professional non-profit theatre company, which performs four lighthearted and entertaining comedy and musical comedy productions on this stage.

2) ETC’s “Youth theatre program is dedicated to helping young people learn and grow as performers, creators, and audience members.” Their youth programs began in 1996 with 25 students, and has since grown to 500 students who participate in after school and summer classes.

3) The theatre also rents its facilities for other performances and outside groups, touring groups like the Glen Miller Orchestra, film viewing, seminars, private functions, and even weddings! The Egyptian Theatre is the main venue for the Sundance Film Festival held every year, sponsored by Robert Redford.

To book the theatre for your event, please contact: Jessica Kunzer at 435-645-0671 or via e-mail: jessica@parkcityshows.com 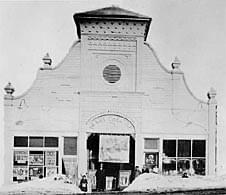 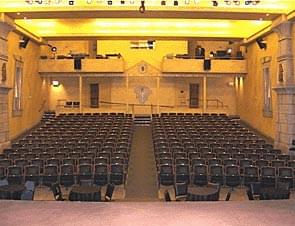 The people of Park City have for a long time appreciated the arts and loved their town theatre. Their first beloved, ornate theatre, The Opera House, was built in the 1880s after a spirited campaign which raised the huge sum of $30,000! Touring theatrical companies came through town, and performed many a production, bringing culture and the arts to this rambunctious silver mining town.

Unfortunately, The Opera House was gutted by the great 1898 fire which consumed most of Park City’s buildings, but didn’t kill anyone, or damper the human spirit to start over with new buildings.

Undaunted, the people rebuilt a theatre in a different spot soon after the great fire, calling it The Dewy Theatre, which continued in the fine tradition of hosting cultural events such as theatrical productions, grand ballroom dances, vaudeville acts and silent movies. There also was a bowling alley in the basement. Then, in March of 1916, a killer snow storm dumped a ton of snow on Park City, causing the roof of The Dewy Theatre to collapse. Luckily, no one was inside at the time.

In 1922, the people of Park City again began to rebuild their theatre on the same spot where the Dewy Theatre had stood, showcasing an Egyptian theme inside and outside, with the help and guidance of an Egyptologist from Seattle. This was a popular art style at the time because of the discovery of King Tut’s tomb in Egypt in the early ’20s. The 400 seat Egyptian Theatre opened in 1926, on Christmas Eve with a John Rugar production. The Egyptian Theatre was built to last, and it continued to offer live productions and films as entertainment for Park City residents throughout the depression, WWI, WWII, and even during the years when Park City was listed as a ghost town on some historic registers, despite still having 1500 people.

In 1963, the name of the theatre was temporarily changed to the Silver Wheel Theatre, which continued to offer live theatre, mostly local productions of old west ‘meller dramas,’ which pleased the tourists and the people brought in by the new industry in town, the ski slopes!

In 1978, the building was looking a bit long in the tooth, badly in need of a artistic facelift to preserve its unique Egyptian art decor. People of Park City once again came together and came up with the money to repair the Egyptian architecture of the theatre, which was finished by 1981. The theatre became the Egyptian Theatre once again, the center stage for Park City’s live cultural performances, including all live art genres.

Sooner or later, even well-built buildings will need a major repair and renovation. The Egyptian Theatre reached that point in the mid 1990s. Once again the people of Park City formed a fundraising organization, Save Our Stage and came up with the money needed to restore the structure to its former glory. The Steiner Egyptian Theatre reopened on February 14, 1998, the home of The Egyptian Theatre Company. 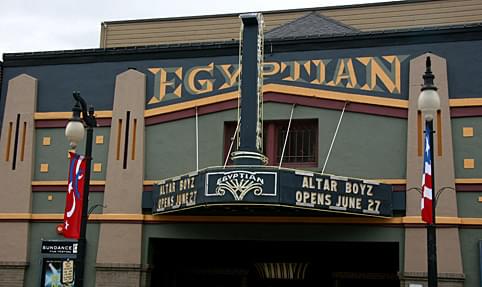 Park City author, C.A. Fliedner speculates who this ghost could be, causing the paranormal activity at The Egyptian Theatre.

According to Fliedner, a 21 year old man by the name of Johnnie McLaughlin, who was an aspiring actor and drama enthusiast, worked at the Dewy Theatre as a stage hand at the turn-of-the-century.

Unfortunately, he suffered a horrible death while trying to rescue miners during the terrible mine accident of 1902. As the haunting of the theatre began soon after The Egyptian Theatre opened in 1926, I think that Fliedner’s hunch has merit.

Ghosts often move into the new building which is built on the land of the original site. (For example, see: The Willard Library)

When no one is on the stage, footsteps have been heard on its wooden floor.

Horrible screams have been heard inside the theatre.

A male apparition has been seen by patrons, staff and performers.

This ghost can be rude. People have been pushed to the ground.

Doors have been known to fly open by themselves.

There has been no psychic research done, but eye witnesses have experienced the above listed paranormal events in the past and currently. 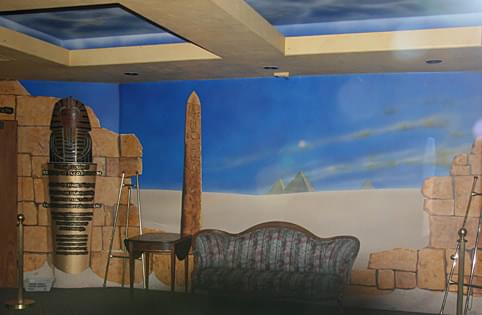 The Egyptian Theatre can be found in the historical section of Park City. 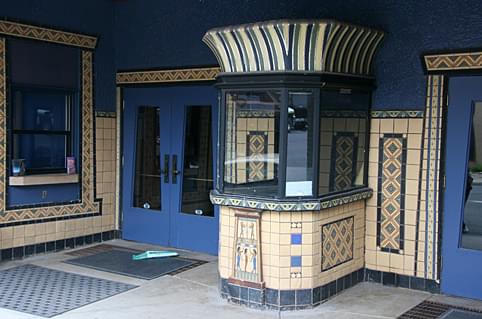