The spirit of a murdered woman tried to bully the living.

Once a union fort, built in 1842, Fort Washita was destroyed in 1861 by confederate soldiers from Texas, who captured and overran it. In 1974, the south barracks were reconstructed. 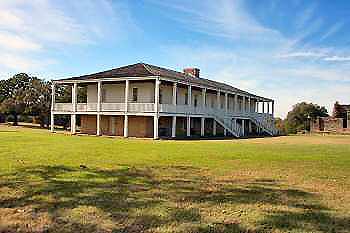 Sometime between 1842 and 1861, a strong-willed lady with fortitude, known as Aunt Jane, was murdered by either thieves or nasty union or confederate soldiers, who were trying to get her to tell them where she had buried her money. It was never found, and her simple grave is on the grounds of Ft. Washita.

Spirit of Aunt Jane – Out & About

Some claim that poor Aunt Jane was beheaded, and have reported seeing her headless apparition in a white gown, floating near the fort ruins.

Some have said that they have seen her riding a horse pell-mell through the fort’s ruins, with her long, black hair flowing behind her.

Treasure seekers have never found her money, but some have felt her presence. It has been reported that an unseen force stopped some treasure hunters’ pick axes from even touching the ground.

Spirit of Aunt Jane – A Bully!

Late in the 19th century, or early in the 20th century, Aunt Jane seemed to, at one point, make a real pest of herself, by haunting a Dr. Stalcup, who lived near the fort’s ruins.

A bit of a bully, during this time, Aunt Jane’s ghost most harassing action was to occasionally possess young Molly, who was the child of Dr. Stalcup.

One night Aunt Jane’s apparition threatened to cut off all of Molly’s hair.

When Mrs. Stalcup kneeled in fervent and intense prayer, Aunt Jane backed down and stopped her nonsense.

Occasionally, the apparition of Aunt Jane is still seen today around the ruins of Fort Washita.

Fort Washita is located in southern Oklahoma. Its ruins are located on the Washita River, north of the city of Durant, near the Tishmomingo National Wildlife Refuge, which is not far from the Texas border.