Many famous people who enjoyed their time here still like to visit as spirits.

It seems to be a favorite meeting place as well for ordinary spirits. 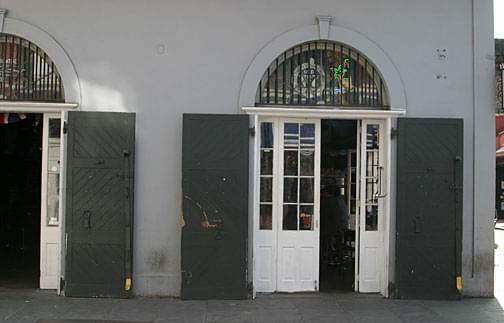 “Everyone you have known or ever will know, eventually ends up at The Old Absinthe House”

“…But our business is with the heart of things; we must go beyond the crude phenomena of nature if we are to dwell in the spirit. Art is the soul of life and the Old Absinthe House is the heart and soul of the old quarter of New Orleans.”

This two-story, Spanish-style building that was constructed in 1806, is now owned by Tony Moran, who has three different service businesses in this building, making good use of its space. The outside of this building is very appealing, in great shape, as is the inside of this classic New Orleans structure.

On the first floor, the room in the front is still the home of The Jean Lafitte’s Old Absinthe House Tavern. Its decor is a wonderful mix of the past and present. Along with the antique chandeliers, an 1860s lovely copper-colored wooden bar that can seat 50 patrons, marble fountains and brass faucets, one sees jerseys and helmets of beloved football heroes and legends, hanging from the bar’s cypress beams up above it all. The walls are covered with business cards of their patrons. The walls throughout this incredible building are covered in the framed photographs of several of their famous patrons.

This original copper-colored bar was recently returned in 2004, after it was moved out during Prohibition. After a 3 million dollar restoration project done in the tavern and restaurants, the bar once again is in its original place in this tavern.

Tony Moran’s Restaurant, also on the first floor, is located in the room at the back of the building. An upscale establishment, it offers fine Northern Italian Cuisine.

On the second floor is another upscale restaurant called Jean Lafitte’s Bistro, which serves the fine flavorful New Orleans Cajun and Creole specialties. The combination of the Hand painted murals and the early 19th century art displays found in the dining room add so much to the “old world elegance decor” enjoyed by the patrons, and perhaps some visiting entities. 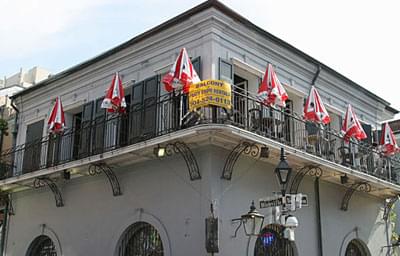 This two story building was originally built in 1806 by two Spanish Brothers, Pedro Front and Francisco Juncadelia as their importing firm’s headquarters and place of business. They were very much like the neighborhood grocery store, trading through the barter system, for food, tobacco and Spanish booze. It is said the the second floor area is where Jean Lafitte and Andrew Jackson planned the defense and victory strategy for the upcoming battle with the British in the Battle of New Orleans.

In 1815, the nephews of family member, Seńora Juncadelia, became the owners. The first floor was transformed into a coffee house and saloon, called “Aleix’s Coffee House”. In the 1860s, the business at this coffee house sky-rocketed, after its saloon mixologist Cayetano Ferrer made a new drink, The Absinthe House Frappe, using a popular narcotic-like spirit, absinthe, which was very popular in Europe. This drink became so popular, that the owners of this coffee house changed their name to THE ABSINTHE ROOM. A special bar was built to serve this drink; the copper-colored wooden bar with its antique fixtures now seen in this tavern today. 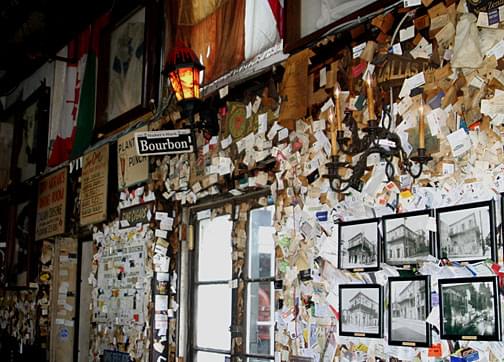 Unfortunately, the side effects caused by its narcotic elements could be serious, causing hallucinations, delirium, madness and even death. Absinthe was outlawed as a dangerous drug in 1912, but safe substitutes such as herbsaint are used now.

However, it wasn’t until the Prohibition era, that the authorities threatened to burn down the building, to make them an example of what would happen to those still serving absinthe. The bar owners quickly moved their copper-colored wooden bar out of the building to a warehouse in New Orleans, opening The Absinthe House Bar in the warehouse. It wasn’t until 2004, that this original copper-colored bar came back to its original home.

THE ABSINTHE ROOM, eventually changed to THE ABSINTHE HOUSE, and was the favorite pub of many famous and well-known people, during its 200 year old history, including Oscar Wilde, P.T. Barnum, Mark Twain, Jenny Lind, Enrico Caruso, General Robert E Lee, Franklin Roosevelt, Liza Minelli and Frank Sinatra. Indeed, the walls throughout this incredible building are covered in the framed photographs of several of their famous patrons.

It seems that many entities who enjoyed THE ABSINTHE HOUSE building while alive, still like to visit in their afterlife, perhaps reliving the good times they experienced in this building.

Seen especially on the second floor.

The members of the staff have many stories about this entity, who visits the tavern area and especially likes the Bistro on the second floor, when he isn’t checking out the living at his old Blacksmith Shop.

Bar doors open and close by themselves.

Moving bottles and glasses around the bar area have been reported.

Chairs have the tendency to move back and forth, like a group of entities get together after closing hours.

Seems to be the place that is as popular with entities as it is with the living. Can’t find any solid evidence backing up the experiences of many people, but their existence has been reported by many witnesses throughout the years. 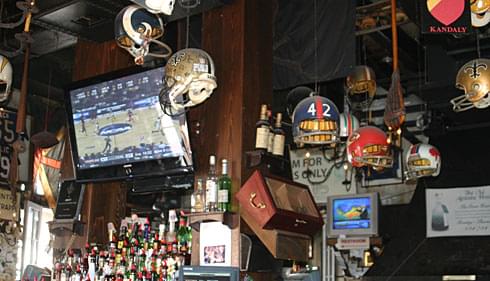 The 200 year-old Absinthe House Bar has long been found on the corner of Bourbon Street and Bienville Street. 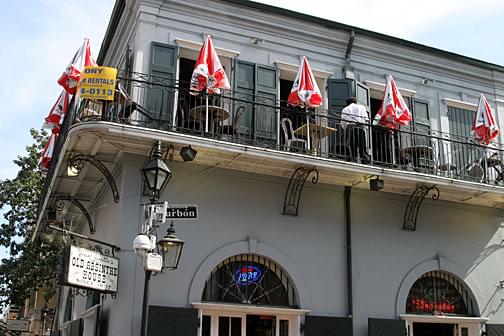