This hotel is incredibly haunted with one hundred
basically well-mannered spirits who love to tease.

Crystal chandeliers from Czechoslovakia, marble floors from several locations around Europe, marble railings, imported from France, that once graced the lobby of the Parisian Grand Hotel. Spectacular Italian columns and statues were bought to grace the exterior, and fine art and antiques from the world were added to the decor, much to the pleasure of its guests. All the modern conveniences expected in a 4 star hotel can be found here. 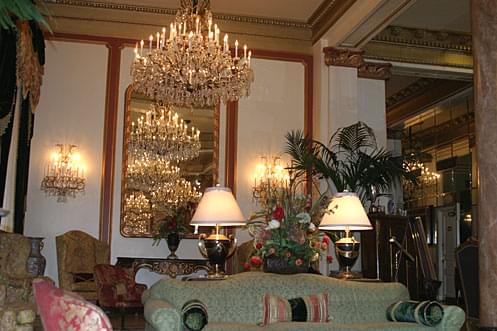 The land upon which this hotel now stands on was part of the original land grant given to the Jesuits by the founder of the New Orleans Colony. When the Jesuits were expelled from New Orleans at some point, the land became part of a huge sugar cane and indigo plantation, owned by Jean Gravier. After some years, Jean Gravier suffered a financial fall, and the land returned to its swamp-like beginnings.

Around the turn of the 18th century, this land was in a very bad part of the outskirts of town, where crime and murder were a way of life. Poydras Street was a stinky, stagnant canal.

The New Orleans Carrollton railroad came to its rescue, and reclaimed the land in 1830, filling it in so it could be used for more wholesome endeavors. The main depot was built on the spot where Le Pavilion Hotel now stands.

In the early 19th century, the railroad lost interest and the depot was remodeled to accommodate various forms of entertainment, like circuses, traveling shows and other acts. By 1867, it was time to tear it down, and a German Theatre (Werlein Hall), owned by Mr. Philip Werlein, who founded the famous music store. After a long legal battle with the city, who was trying to take over this property, Werlein Hall finally burned down in a suspicious fire.

From 1889 – 1907, a magnificent hotel, described as a palace with luxurious accommodations, was constructed, called New Hotel Denechaud, a high class hotel, offering continental splendor. This well built building survived good times and bad times, offering a respite from the troubles of the world.

By 1970, New Hotel Denechaud was ready for a restoration effort, when the hotel passed into new ownership. The new owners did a great job of mingling old world charm with the addition of modern conveniences. The owners changed the name to Le Pavilion Hotel. 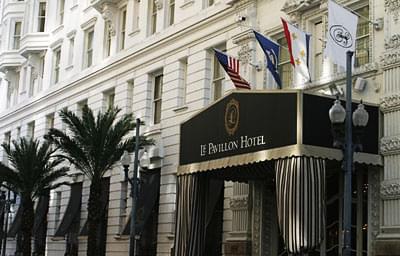 Because of the number of entities found in this building, many different reasons exist to explain their presence: The land upon which the hotel sits had a rather wild and dramatic past, which probably resulted in deaths. Entities who died near a building have sometimes decided to haunt it.

There were two other buildings that stood on this spot, and entities from those may have stuck around to enjoy the hotel. Theatres can have their spirit patrons, and railroads as well can be haunted.

Many people have enjoyed their stay in this hotel, and some of them may have decided to spend their afterlife here as well! Some Entities may be attached to some of the antiques and art work which can be found in this hotel.

After investigations by various paranormal groups were conducted, Le Pavilion has earned the reputation of being one of the most haunted hotels in New Orleans. Strange noises in the night are a sure clue that spirit people are unseen guests. Apparitions of entities get their chuckles by standing at the foot of some of the beds, and watch the living sleep, and wake up with a start!

After 12 midnight in the early morning hours, other entities like to playfully tease the living by tugging bed sheets into the air, making it a little drafty for some of the guests.

One guest must have looked a lot like an elderly female entity’s long lost love of her life. He awoke to find this elderly entity sitting on his bed, who was stroking his head with her ice-cold hands, pledging verbally to never let him go, as he belonged to her! Needless to say, he didn’t agree and made a hasty retreat! At the invitation of the owners of Le Pavilion Hotel, well-known and experienced paranormal investigation groups have examined the Le Pavilion Hotel with concrete results.

A favorite game of the entities is to borrow an item from the staff or a guest, and find the perfect place to return it, though the living may not agree in the odd place picked. 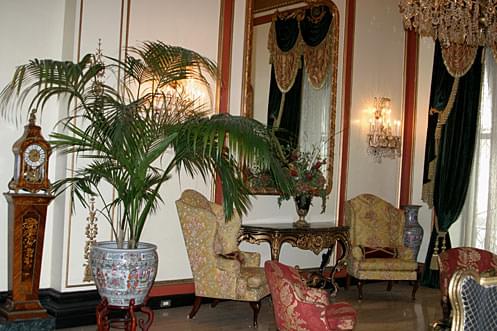 The entities who stay here stepped up to the plate and cooperated with investigators.

Paranormal Investigation Group A came in contact with four intelligent entities, and recorded EVPs saying, “Please, get out,” and “Hold On, I see You Now.”

Paranormal Investigation Group B hit the jackpot and got documentation on over 100 entities and various “haunted hot-spots” in their investigation.

Paranormal Investigation Group C came to the conclusion that Le Pavilion Hotel is actually a portal to the other side.

Yes indeed, in a big way!

The spirits are friendly and playful, with perhaps a few in need of a councilor to help them with their issues. 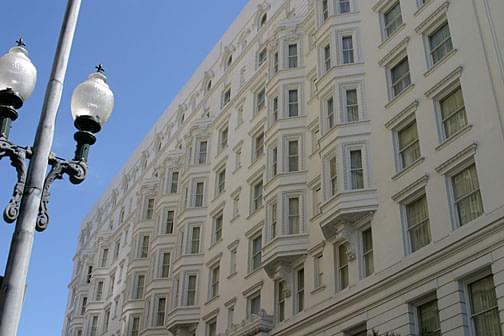 The glorious Le Pavilion Hotel can be found on a main city artery, on Poydras Street, and the corner of Carroll Street, 2 blocks west of St. Charles Avenue, about five blocks away from the French Quarter.