Some people report that the spirit of Marie
and her followers still conduct wild voodoo ceremonies.

This house is described as being a “relatively unassuming house” by today’s standards, but was considered a lovely rebuilt home in 1903. It is a handsome little house, and fits in well with surrounding homes; full of New Orleans charm. The property lot is 3,315 Sq Ft while the house is 1,120 sq ft.

The front is exquisite with ceiling to floor Victorian windows, with fancy window dressings on the top of each window, with lovely dentils along the top near the roof.

Inside, there are high ceilings, hard wood floors, original mantels but fireplaces are blocked off & separate courtyard. It is a single story, two bedroom, two baths with the living room in the center, with the kitchen and dining room located at the back of the house. It has a small back yard and a small side yard. 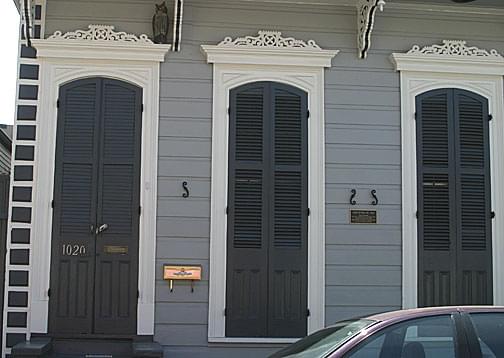 Before becoming a charming little New Orleans home, it was the center of Marie Laveau’s Voodoo business as well as the family forever home. She was the Voodoo Queen of New Orleans. It was a business for her;a way to make a living. She was also a devout Catholic, which was her true faith. She traveled among the sick with Pere Antoine, nursing the people struck by Yellow Fever.

Marie had a common law husband, Jean Louis Christophe Duminy de Glapion, who came from an upper class white family. They were not allowed to be married, because Marie was a Mulatto. Her husband claimed to be Mulato too so the authorities left them alone.

When Catherine Henry died, the legal heirs; Marie and her cousins decided to sell the property to pay for Catherine’s debts. Jean Louis Christophe Duminy de Glapion stepped up to the plate and bought the family home. He put it in the deed that the children produced with Marie will inherit the house.

He and Marie moved into this now “old adobe cottage”. They had seven children, but were unlucky. Out of seven kids, only two made it to adulthood; Marie Heloise and Marie Philomene who survived and were able to live here as well with their children and spouses.

This house was not only the family forever home, it also was where Marie did her work in Voodoo and was a “safe house for many in need.” Orphans and Choctaw vendors found shelter here.

While simple-looking on the outside, the interior had “elaborate altars with statues of saints, animal parts, and effigies.”

Part of her Voodoo business had her holding ceremonies in Congo Park on Sundays where she also learned about the people who would be her clients.

In her later years, she slowly stopped practicing Voodoo and focused on her Catholic faith. She went to mass every day, and worked with “death row prisoner” helping them to confess their sins. She surrounded herself with Christian holy pictures and other relics of the faith.

Marie Laveau stayed here in this family house most of the time when she became sick, starting around 1875, and lived out her days, dying six years later.

The two surviving children as grown women raised their own children in this house; their family’s forever home. One of her daughters continued in the Voodoo business.

By 1903, Marie’s house was a dilapidated fixer upper, so it was torn down. A new house was built right on the original foundations. It is a handsome little house, and has been kept up throughout the years, by dedicated owners.

As of 2020, it is a rental for tourists visiting New Orleans. They have been witnesses to the paranormal activity that happens in this house.

Restless spirits try to continue on with their life work in this world while they work out what they need to find peace.

Albany State Capitol, NY (Spirit of the night watchman, Samuel Abbott, still is on patrol, and tries to outrun the flames, hoping to make it this time out alive.)

Illinois Old State Capitol IL (The spirit of Abraham Lincoln is still remembering all the cases he presented in front of the Supreme Court here, as well as his work in the House of Representatives here. He is seeking peace trying to let go of his restlessness caused by his murder.)

Laveau House, LA (The spirit of Marie Laveau is said to continue with Voodoo ceremonies, and has appeared on Saint John’s Day at Voodoo celebrations held in New Orleans.)

Spirits can have some guilt about what they did during their lifetime, and may be afraid to go to the other side.

Saint Augustine Old Jail Museum (A spirit of a man was hung for something he didn’t do, is afraid to go to the other side because of some of his life choices.)

Alcatraz Prison Museum CA (A spirit of a notorious hitman for the mob who was murdered in the laundry room is afraid to go to the other side because of some of his deeds done in this world.)

St Louis Cathedral LA (The spirit of Marie Laveau has been seen praying in this holy place, perhaps seeking forgiveness for practicing Voodoo.)

Spirits can bond with the land where their special place once stood, or where they had a special event.

Capitol Records TN (Two spirits of elderly ladies have moved into this really ugly building, because their beloved house that once stood on this property was torn down so this building could be built here.)

Whaley House CA (The Whaley House was built on the land used as a public execution by hanging place.)

The Custer House ND (This house was rebuilt on the same spot that the original house once stood.)

Laveau House LA (Apparently, the spirit of Marie Laveau has attached to the foundation/land of this house and has decided to move in too!) 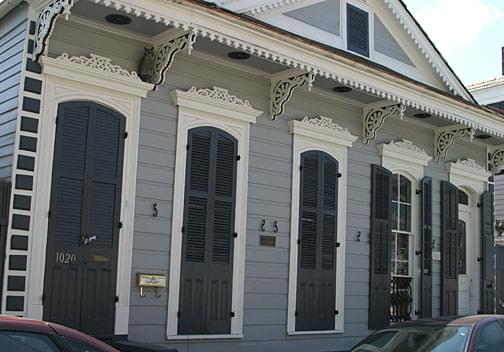 The spirit of Marie Laveau continues to go about her business in New Orleans.

Her detailed apparition has been seen walking down Saint Ann Street, attired in a long white dress, wearing her tignon, which is a scarf with seven knots in it.

She has been seen praying in Saint Louis Cathedral.

In a drug store on St. Anne Street, her apparition slapped a man in the face when he failed to acknowledge her presence.

She then floated to the ceiling. The owner of the store witnessed the whole thing.

Ceremonies in the Home

Tourists who have rented the house have been awakened by drums and Voodoo chants coming from the living room. Yikes!

One tourist couple found a single feather on the floor after a night of drums and chanting. It was a signature sign from Marie Leveau that will bring good luck.

Apparently, the spirit of Marie isn’t always gracious, especially if tourists sleep in her bedroom.

One tourist was taking a nap on a bed in one of the bedrooms, resting from a morning of sight-seeing.

He woke up to see a shadowy figure standing in a corner of the room, not looking too pleased.

Another female tourist awoke one morning in one of the bedrooms and became very frightened when something unseen was holding her down on the bed.

While the house hasn’t been formally investigated by professional paranormal investigators, there have been boatloads of personal experiences reported by tourists who stayed there while touring New Orleans.

The spirit of Marie Laveau has been experienced by tourists who stay as her guest in this vacation rental. The owners of the property won’t let paranormal investigators in to check it out because they know who is there, and don’t want to vex a Voodoo Queen in spirit form. 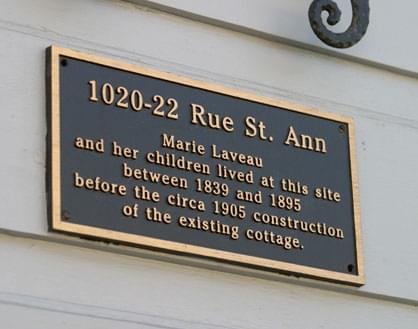 The Marie Laveau House is located near the edge of The French Quarter of New Orleans, very close to Louis Armstrong Park (Congo Square). It sits on Saint Ann Street between Rampart and Burgundy Streets.

HISTORICAL New Orleans WEBSITE: The Home: Marie Laveau’s House: Step 2 Of 4 on the Meet Me at the Crossroads: The Life and Legend of Marie Laveau tour.