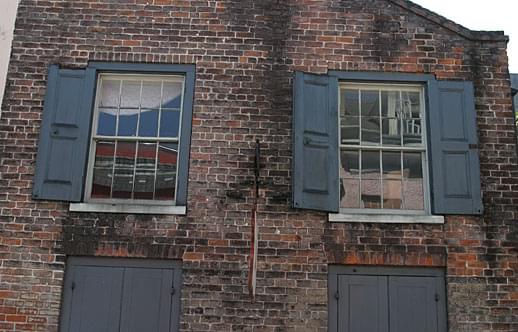 It is described as a handsome, two story, red brick Federalist style mansion museum, with a lovely courtyard, stable and a functional outdoor kitchen! This is the place to go to experience and learn about life in New Orleans during its Golden Age in the early 1800s. The home has a central hallway on both floors, and the various rooms’ entrances are off the hallways. There are exhibits within the structure; half of which came from both the Hermann and Grima families. A house slave would greet visitors in the hallway, and escort them to the parlor.

Interestingly on the first floor just off the hallway near the front door, opposite the parlor, there was a bedroom. Perhaps, an elderly relative couldn’t go up the stairs. There is also a bedroom in the back of the house on the first floor.

Looking at the map of the house on their web-site, the circular staircase to the second floor was toward the back of the first floor, and wasn’t the center showpiece of the foyer. It was a pretty but very functional staircase. The dining room was in the back of the house, with the pantry the most southern part of the house.

The kitchen was a state of the art 1831 kitchen. According to their webpage on this subject, the kitchen was built with “a hearth, a baking oven, and stewholes (potager). These implements provided four main ways of cooking: open hearth, down hearth cooking, baking in a beehive oven, and ‘stove’ cooking on the stewhole. With these cooking devices and their trained culinary skills, enslaved women created delicious Creole dishes using local game, seafood, and produce that were purchased from the market.” 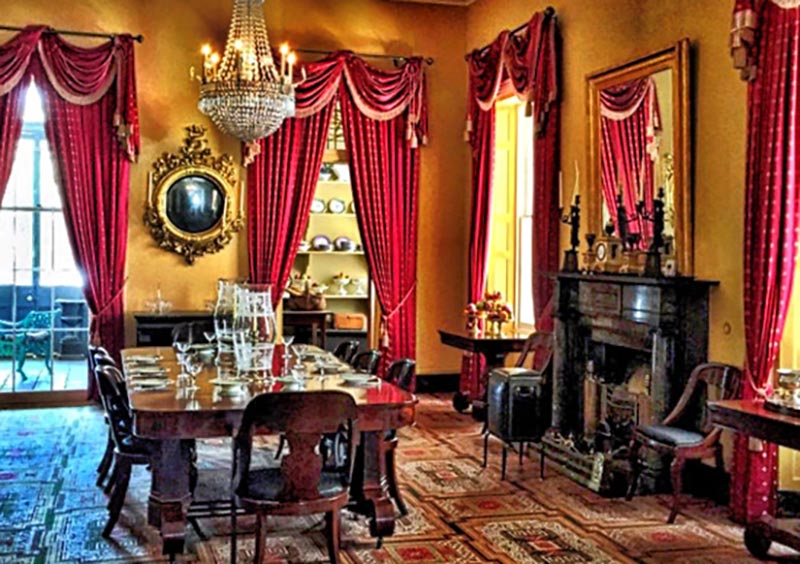 The second floor was family living space, including bedrooms and a library.

One of the annual exhibits during the fall of 2015 is DEATH IN NEW ORLEANS: (October). The visitor sees everything as it would be when Mrs. Grima was laid out in the parlor; all the decor, and other things that were part of visitation and the wake, New Orleans style.

In the carriage house, there is The Exchange Shop that features a collection of the artists’ work that “best exemplify the artistic community of the Gulf Coast region.”

Visitors can shop for photography, mixed media, paintings and drawings, textiles, glass works, jewelry, and pottery/ceramics. The artists are on consignment, and receive 70% of sales, while the museum receives 30%.

Special social events like weddings can take place at The Hermann-Grima Historical House Museum, which brings in more money to support this museum.

In 1699, the first settlers of the French Louisiana colony began to come to populate the New World. In 1718, Jean Baptiste Le Moyne, Sieur de Bienville, founded the city of New Orleans, then known as La Nouvelle-Orleans. New Orleans became a popular place for people to make their homes, and it became the capital of this French Louisiana Colony.

As the result of the Treaty of Paris that ended the Seven Years War in 1763, France lost all its land in America. Western Louisiana became the possession of Spain. This resulted in New Orleans being governed and infused with another culture for 37 years. Louisiana land was given back to France in 1800 via the secret Treaty of San Ildefonso. Spain and France had become allies against the English. 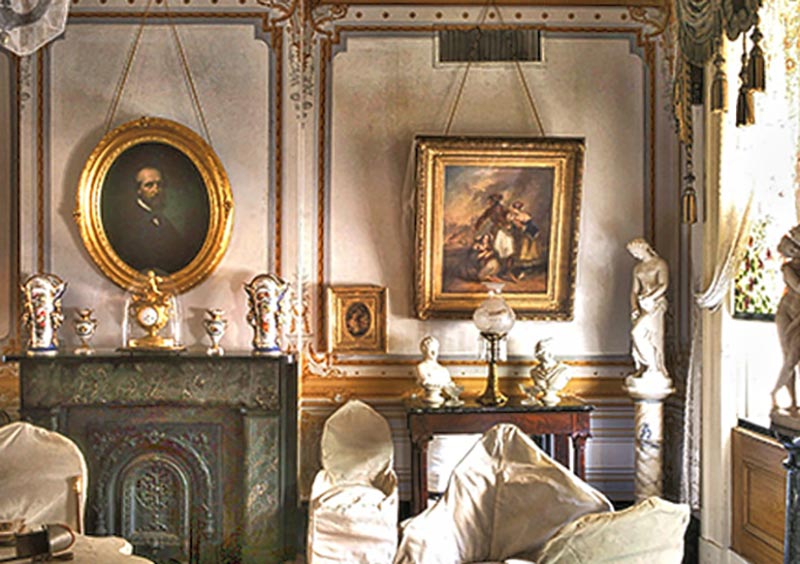 Statehood brought new freedom and opportunities to the business community. In the early 1800s, during the Golden Age of economic growth in New Orleans, the economy was booming; flowing with economic promise. People from around the world came to New Orleans to open businesses and get their share of the success to be had.

Besides being very cordial, hospitable people, the people of New Orleans had learned to accept and appreciate what other nationalities had to offer. It goes to reason that if a German Jew came to open a business, they would support him if he offered great products. Many merchants and people involved with everyday commodities in demand, made a considerable amount of money.

German Jewish immigrant, Samuel Hermann amassed a fortune from his endeavors in the cotton market in New Orleans. In 1831, Hermann was able to build for his large family one of the finest examples of the Federalist style home in New Orleans, referred to now as the Hermann-Grima House Museum.

Unfortunately for the Hermann family, a economic depression squashed business profits, and Hermann’s cotton business suffered. Ten years after he built what they thought was the family’s forever home, in 1841, the Hermann family lost their cherished home in bankruptcy court. Samuel Hermann had to start all over again, which he probably did; being a tough, brave entrepreneur who was willing to immigrate to America for a better life.

In 1844, this lovely home was bought by a distinguished judge, prominent scholar and jurist, Judge Felix Grima, who moved in with his wife; Adelaide Montegut, and their brood of nine children. Several extended family members also moved in with them, which was the custom; taking in elderly relatives, or relatives who needed a place to stay. In 1850, after living only six years in this home, Mrs. Grima died on October 15th, 1850, leaving her many children and husband behind to cope, and carry on.

During the Civil War, the Grima family went to live up in the North, but they returned to their beloved home afterwards. Members of the Grima family continued to live there until 1921, when the last Grima son decided to move to another home in New Orleans.

They were careful to whom they sold their long-cherished family home. This lovely estate was sold to a charitable, non-profit organization, run by and for women; The Christian Woman’s Exchange. This caring group was founded in 1881, to help women in need. There were no government services, so private charity groups stepped up to the plate to help people. 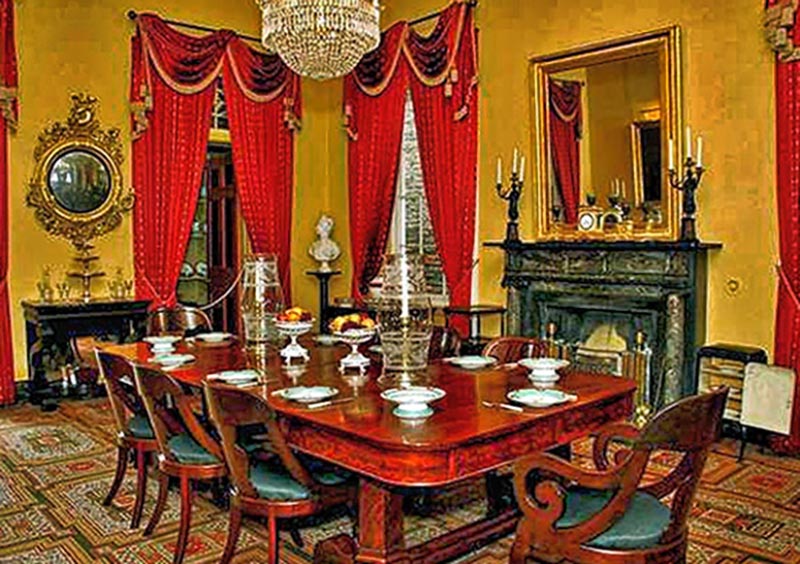 The Christian Woman’s Exchange opened a rooming house; renting rooms to women. Their property included a consignment shop and a tea room and it remained so for many years. Women had a safe place to live, in a chaperoned environment. This was their mission until the times changed, and their services were not needed as other government organizations were created.

The Christian Woman’s Exchange have proven to be good stewards of this property. In the late 1960s, they changed their mission to “one of preservation and education.” The Christian Woman’s Exchange became inspired to historically restore the Hermann-Grima House and property; including the courtyard etc., to its original design, and appearance when the Hermann family lived there.

The Hermann-Grima House Museum opened to the public in 1971; showing how people lived in the “Golden Age” of New Orleans. Their website states: “Painstakingly restored to its original splendor through archaeological studies and careful review of the building contracts and inventories, the museum complex accurately depicts the gracious lifestyle of prosperous Creole families in 19th-century New Orleans.”

This is one of two historical homes that The Christian Woman’s Exchange have restored and opened as a museum. The other property was the home of renowned architect James Gallier, Jr. that they bought in 1996. In 1997, both historical homes received accreditation as one institution by the American Association of Museums.

Well, it seems that the people in this world aren’t the only ones who now enjoy the Hermann-Grima Historical House Museum that allows people to step back into time. Some spirits also are enjoying their memories, being drawn back by the authentic restoration done to their beloved home and/or place of employment or servitude.

People who were cordial, friendly and helpful while alive, don’t change when they pass on into the spirit world.

Southern hospitality continues here from spirit people toward staff and the living. When family homes are restored, it can act like a environmental trigger, and draw back spirits who loved the house.

When family homes are restored, it can act like an environmental trigger, and draw back spirits who loved the house.

People who die unexpectedly, or quickly, like to visit or even spend their after-life in their forever home that they loved. Mrs. Grima died unexpectedly in 1850.

Objects and displays have acted like trigger objects and have drawn spirits back into this world.

Half of the displays of items and furniture came from the Hermann and Grima Families. When people for whatever reason must leave or sell their beloved home, sometimes choose to spend their after-life or visit in this special place that they adored. The Hermann family had to give up their beloved New Orleans home because of financial woes.

When people for whatever reason must leave or sell their beloved home, sometimes choose to spend their after-life or visit in this special place that they adored.

The Hermann family had to give up their beloved New Orleans home because of financial woes.

Servants/employees who loved the place of their servitude/employment in this life, sometimes like to continue to serve in their after-life.

Some of the manifestations suggest that the entity of a servant, perhaps the head house slave, could be the one looking after the staff and visitor’s comfort.

These spirits could’ve been former servants or former owners when alive in this world. Not only do they graciously share their home with the living.They try to help in whatever way they can.

Improving the environment for the living:

The staff find that these unseen presences like to scatter fragrant rose and lavender scents around the rooms to freshen and air.

On cold winter mornings, the living often find that the spirit people have lit the fireplaces to warm the rooms, before the museum opens; warming up the house museum before the staff start their day of running the museum, consignment shop and tea room.

The Entity of Mrs. Grima

She makes herself known beginning in the month of October when the staff of the museum set up a funeral display in the parlor, that would’ve been there for Mrs. Grima’s funeral, creating the exhibit, DEATH IN NEW ORLEANS.

The staff think that she comes out of curiosity to see who will be mourning for her so many years after her death; people who didn’t even know her.

It would be rude not to acknowledge these people who have set up this display to honor her; People she didn’t even know while alive.

They don’t say what she does to get their attention, though it is probably in a polite, gentle mannerly way. The clue is that staff have said that they think it must be her.

Perhaps she flickers the lights, brings a sweet scent into the parlor, moves items to the way she likes them to help. Perhaps they feel her kind presence, hear her voice, or even have seen a lady apparition for a brief second. 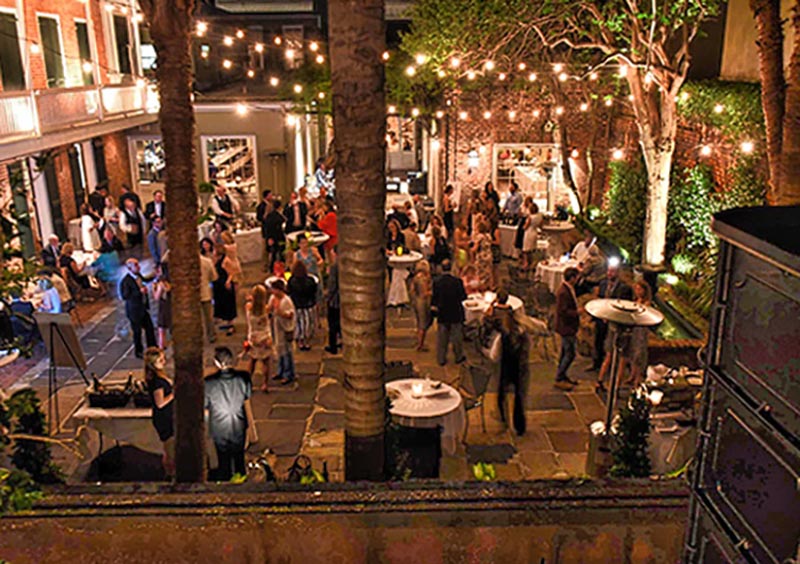 Most Probably So, despite the fact that there is no hard evidence of paranormal activity published. No investigations have been allowed here. If there were investigations done in this museum, it was on a private client basis.

Staff have experienced the efforts of spirits trying to reach out with Southern hospitality, finding ways to help them keep warm, enjoy better aromas in the rooms, and anything else that makes working as a museum staff member more pleasant.

Mrs. Grima is pleased and curious about the annual October Death in New Orleans exhibit that honors her memory with a display of her wake with decor and items that were used.

The spirits must also enjoy watching the 1831 cooking demonstrations in the kitchen area, and visiting their old items that are on display in the other rooms.

This lovely, restored historical house museum is located on St. Louis Street in The French Quarter; in the middle of the block between Bourbon St. to the south and Dauphine St. to the north. 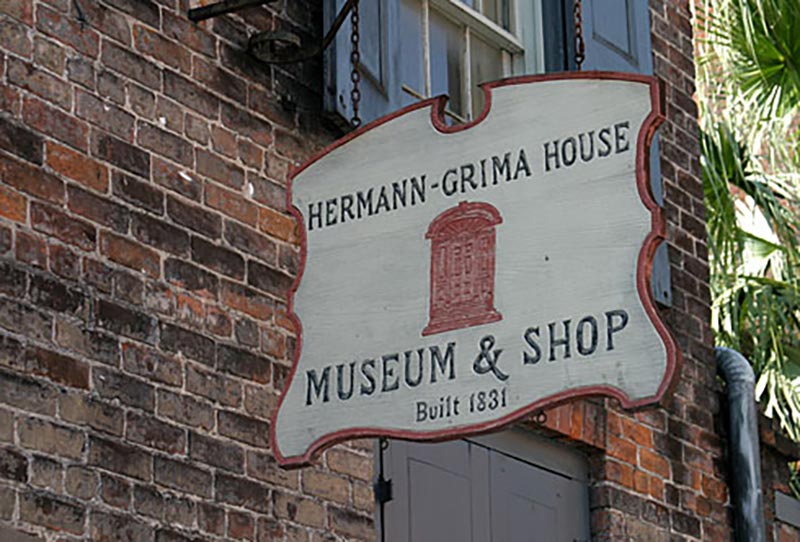