Both the living and the dead are inspired by the hotel’s romantic aura.

Apparently, spirits from all eras are still having “a roll in the hay.”

Dauphine Orleans Hotel, opened in 1969, can be described as an updated boutique hotel with a three storied combination of 18th century and 19th century former French Quarter townhouses, some cottages and a two-storied building used as the hotel’s bar, May Bailey’s Place. Over the years, structures were purchased, and all became part of the Dauphine Orleans Hotel.

The hotel is in great condition and combines the aura of its restored, historic New Orleans feel and structure, with modern features and amenities most enjoyed by its guests. Bathrooms have “granite counter tops, marble floors and archive toiletries.” Jacuzzi tubs can be found in the suites. Beds are draped “with 300-thread count linens.” 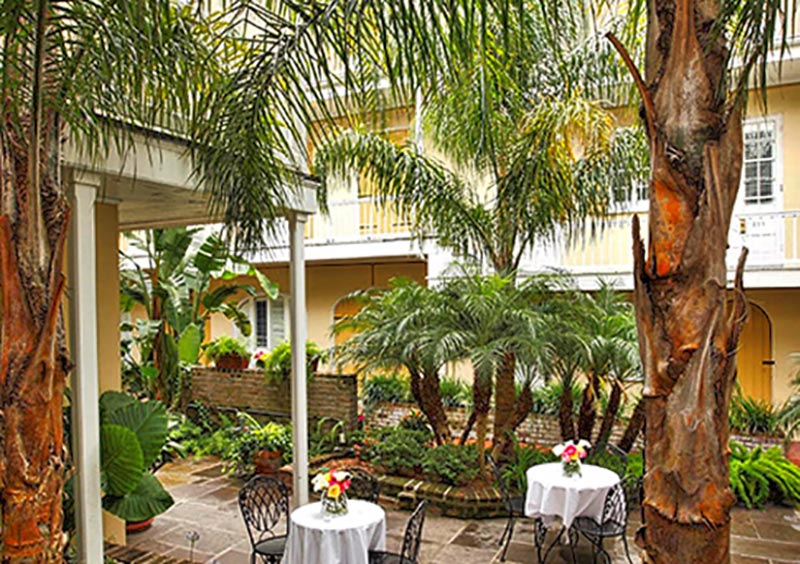 May Bailey’s Place; Dauphine Orleans’ Hotel Bar is a two story Victorian building, inside and out. The hotel’s upscale bar is found on the first floor and in the city of New Orleans; including May Bailey. The original beautiful stone fireplace and wood beams were found under a sheet of rock and restored.

There are two lovely, private courtyards on the Dauphine Orleans Hotel property that are surrounded by townhouse stone walls, surrounded by the guest rooms and suites. One is the Carriage House Court, which is adorned with fountains, palm trees and offers an outside dining area. The other courtyard has a salt water swimming pool for its guests to enjoy.

The Carriage House – This 18th century building was once the carriage house of a townhouse. It offers lovely rooms and suites with period antiques and other upscale features.

Early 19th century Herman Townhouse; which is located just across from the main hotel structure on Dauphine Street. It was restored in 1991 to its original splendor, uncovering its hidden beauty covered up by modern walls. The Herman Townhouse has fourteen, decent-sized guest rooms with a Jacuzzi, tub and shower. It is said to be much quieter and also has its own lovely courtyard. Rooms around the Herman Townhouse Courtyard have “two balconies complete with plantation shutter doors out to a balcony with a quaint little wrought iron table and chair set for two that overlooks Dauphine Street.” 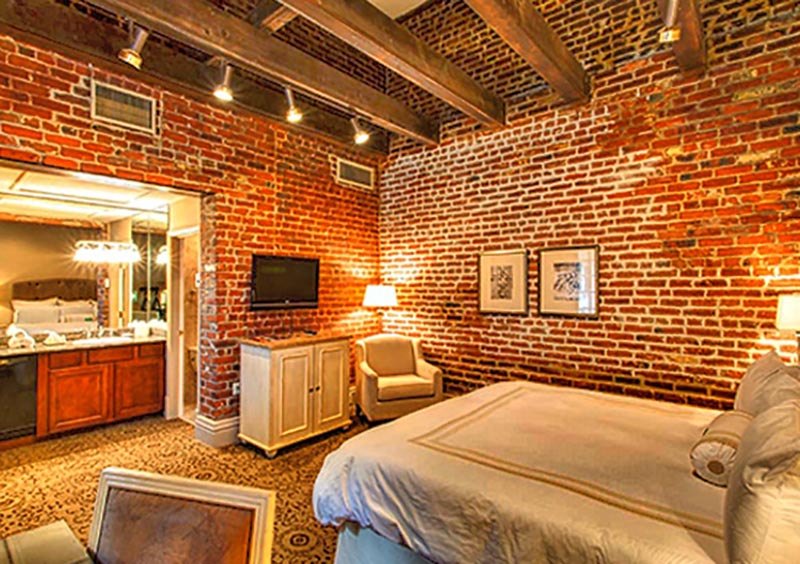 Some of the buildings existed since 1775, though most of the hotel buildings made up of town houses, cottages and the old bordello were built during the 19th Century. From 1821-1822, one cottage that is now restored and used as the hotel’s breakfast room, was the place where John James Audubon painted his famous “Birds of America” series of works of art. This breakfast room is called The Audubon Room.

The Herman Townhouse was built in 1834; the town home of prosperous Samuel Herman who had very particular, precise requirements for his new house, including how many coats of paint that were to be used. He provided “best country brick, sand and cypress,” put together with hand-made nails from John Lafitte’s Black Smith Shop. Ownership of the Herman Townhouse changed a whopping 21 times until 1966, when it was purchased to be part of the Dauphine Orleans Hotel. 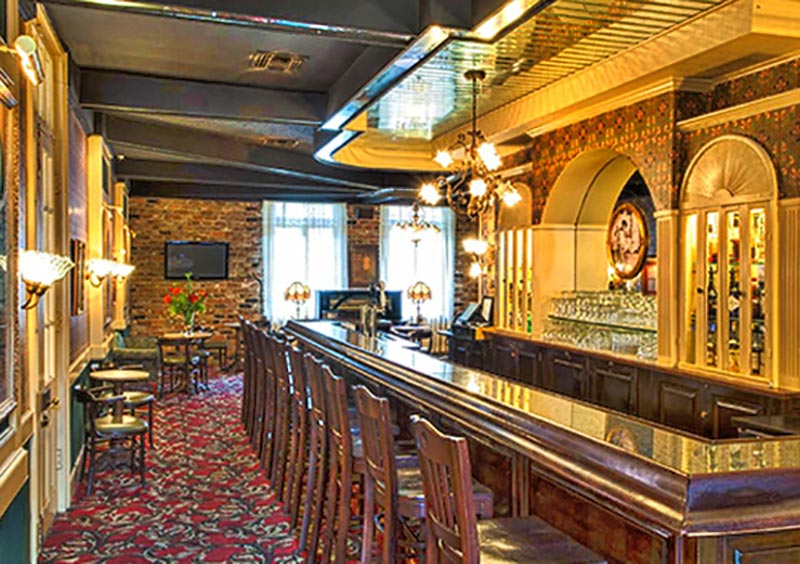 Located in the Dauphine Orleans Hotel is May Bailey’s Place, the bar mentioned above in the description. It is in a two story structure that was formerly a bordello back in the day, as this part of New Orleans was once the red light district, known as Storyville District.

May Bailey’s Bar was and is strategically located only a block from party central, Bourbon Street. This Dauphine Orleans Hotel bar, is named May Bailey’s, after the madam who bought a city license in 1857 to set up her legal bordello or, “SPORTING HOUSE”; a legal business in the Storyville District of New Orleans.

The bordello had a great business until 1917, when prostitution suddenly was frowned upon and the sex for sale businesses around New Orleans went underground.

Over the years, the buildings that are part of The Dauphine Orleans Hotel were purchased under one land title; the last one being the Herman Townhouse, in 1966.This group of structures opened as the Dauphine Orleans Hotel in 1969. The buildings were fixer-upper opportunities, but through the years each was both restored to the original beauty and renovated with pleasing amenities to please today’s guest. The year, 1991, was a great year for restoration. For example, May Bailey’s Place had its added rock ceiling removed to reveal the Pecky Cypress and pine beams. Also uncovered was a lovely stone fireplace.

Having a group of townhouses, cottages and a main building probably requires frequent upgrading and restoration to keep competitive. Not only do their living guests appreciate the charms and amenities of the Dauphine Orleans Hotel, but apparently so do the spirit people who also stay and visit their special place in this world. 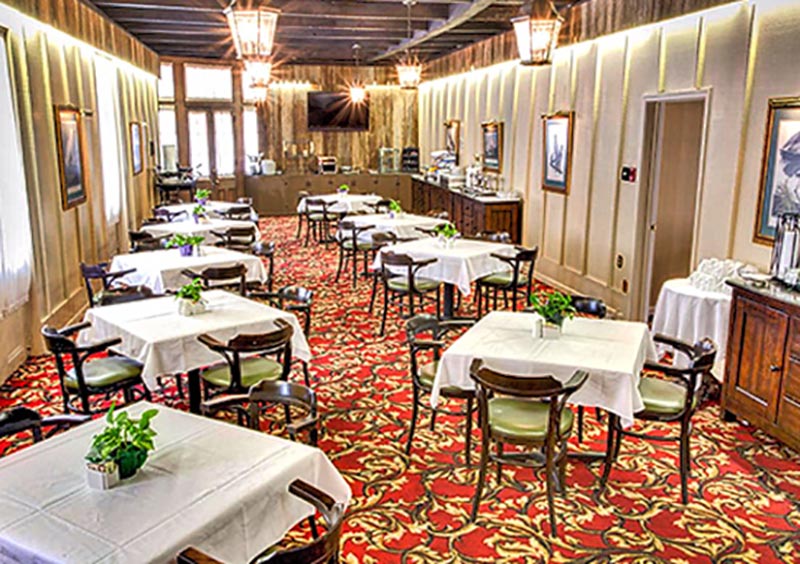 When Restorations and renovations are done on buildings, these actions can act as an environmental trigger, and draw spirits back into this world for a visit or an afterlife vacation. Sometimes spirits return as couples to remember their glorious intimate time of love at their favorite establishment.

Couples from all eras who enjoy the party atmosphere along Bourbon Street could still be checking into The Dauphine Orleans Hotel for a romantic roll in the hay, enjoying their memories: not letting the fact that they are dead and in spirit form get in the way. 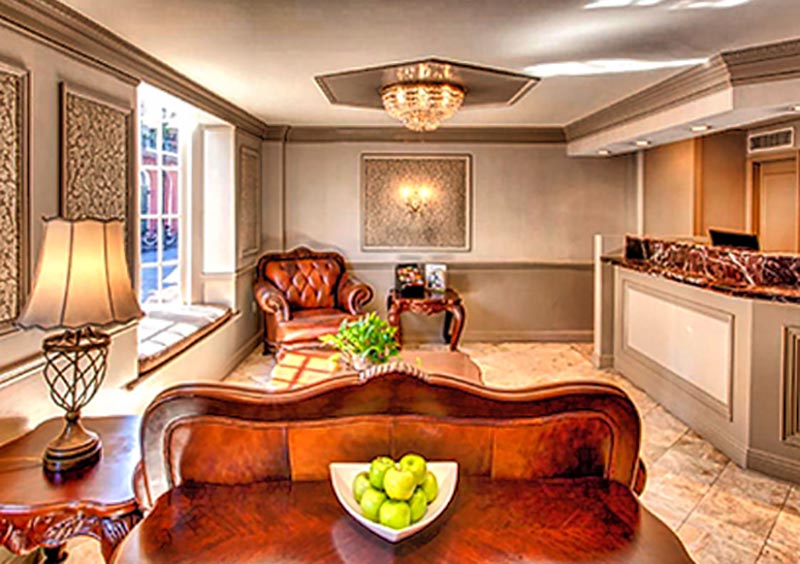 Hotels in the past have often offered in-house sexual entertainment and pleasure for their guests and patrons for a price.

Bordellos could also exist independently like they did in Butte, Montana, where demand was huge. As new Orleans has long been a party-hardy city, prostitution was a big money maker; whether it was open during the time that bordellos were legal or during a time that such activity was deemed to be illegal.

May Baily’s Bordello opened three years before the Civil War. Confederate soldiers on leave would come to enjoy themselves partaking in the delights of Bourbon St. and the Storyville District, including May’s bordello.

Soldiers who are killed while on duty, sometimes like to continue to visit places they enjoyed while alive.

Perhaps soldiers killed in the Civil War still frequent the place where they enjoyed the company of lovely women who offered their bodies for a price, in this legalized pleasure palace.

Prostitution has long been a risky line of work. Disease, emotional pain or dangerous situations have ended the lives of women in the sensual pleasure for pay business.

For some women who wound up being “sex workers”, they may have had another dream for their lives at one point in their lives. Perhaps they thought that prostitution was easy money and a temporary job to help them get where they wanted to go. Some could see no other way to feed themselves. Some women were coerced or kidnapped into the sex slave life. Little did they know how hard and risky a life it was, and what it did to a woman’s reputation permanently. One of the only ways out of prostitution back in the day was to marry a customer. Women have killed themselves after losing their chance to get out of this business, due to death of their Prince Charming, rejected by their intended, or not finding anyone at all who is willing to marry them by the age of 30.

Some are killed by an ill-willed customer, a jealous boyfriend or wife, or a displeased employer.

Others caught a deadly Venereal disease, or TB:(Related post: Stranahan House), or died from an opium-induced abortion. 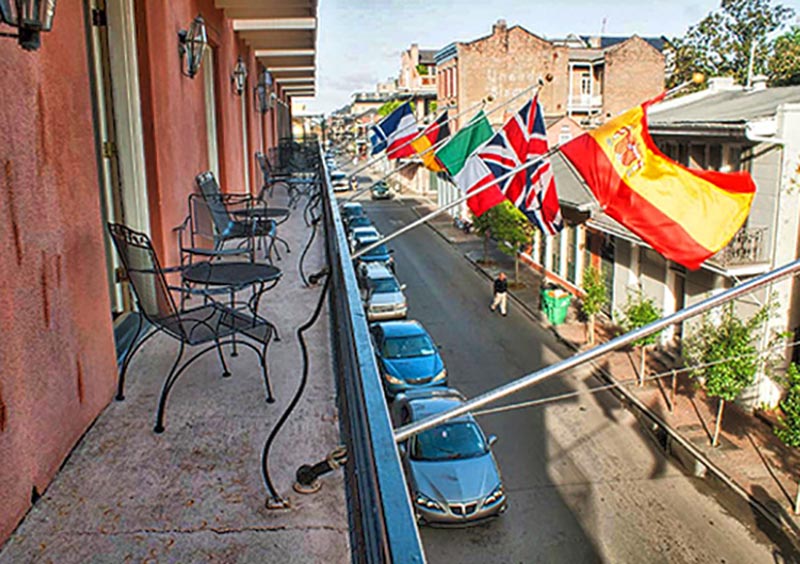 The entity of a woman with long hair

She is thought to be a former prostitute.

Described as not being quite in her right mind that she probably lost through alcohol abuse in an attempt to medicate herself. Though she was unhappy in her work, as a spirit, she now likes to dance in the courtyards, in a whimsical manner.

The entity of a General

They are dressed in a dark uniform; May be from the Civil War or the War of 1812.

He frequents the courtyard and one of the other structures, perhaps May Baily’s building; though no one knows what this building was during the War of 1812, or what was located here during that war.

He had no fear in coming forth and making contact with a paranormal investigator/Parapsychologist Dr. Larry Montz and proceeded to escort Montz’s investigation team through the “pool area and back through to the cottages.”

They are still enjoying sex, not letting the fact that they are dead get in the way.

May Bailey’s 2nd floor suite and some of the hotel rooms in the main building of the hotel are still being used by entities for sexual recreation.

Entities of men in Civil War uniforms mingle with entities of May Bailey’s girls, as both these groups are seen by witnesses.

The entity of a dark-haired, Creole soldier

Some of the rooms in the hotel have been the scene of noisy entity interludes.

The Spirits of amorous couples

They are full of fun from their “Bourbon Street Experience” are busy indeed. Prostitutes in spirit form; still working, giving former clients who are also spirits the memories of all the fun they had visiting the Bordello. Spirit people are still enjoying sex, not letting the fact that they are dead with no body get in the way.

Beds are reported by witnesses to bounce and shake on their own, both early in the morning and late afternoon.

Knocks are heard upon the doors, perhaps patrons of the bordello looking for their choice in a favorite female prostitute.

Disembodied moans from the pleasures of sexual passion have been heard in the rooms by staff and guests.

Empty rooms have been locked on the inside by an entity or two wanting some privacy. 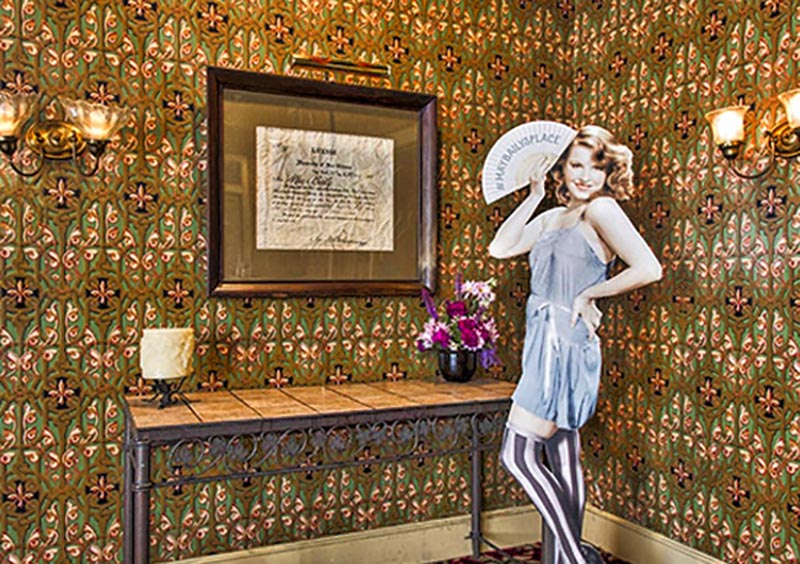 Yes Indeed – In a big way! The Dauphine Orleans Hotel sponsors the Ghost expeditions program: Dauphine Orleans Ghost Expedition Package. They conduct their own paranormal investigation, calling it, ” The world’s original organized paranormal field investigation. They have put their spirits to work, and the spirits seem to enjoy the company of the living. These spirit residents come out to interact with the participants, as the spirits have good Southern manners, and it brings some chuckles into their after-life retirement.

Throughout the years, many people; both staff and guests, have had the personal experiences mentioned above, especially in the old bordello, May Baily’s Place Bar.

On the Dauphine Orleans website page, they report: “Parapsychologist Dr. Larry Montz, founder of the International Society For Paranormal Research, conducted an investigation at the Dauphine Orleans Hotel and reported several spirits, among them a soldier, general or other high ranking officer, wearing a dark uniform that could have been from the War of 1812 or Civil War. His name might be Eldridge. He walked with the investigative team by the pool area and back through to the cottages.”

Ghost Adventures investigators, led by Zac Began had both personal experiences and caught some hard evidence as well when they investigated May Bailey’s Place. Zac and his team know how to entice the spirits to come out and meet them. The team usually dresses in the appropriate attire for the time that the spirits lived, as an example.

In the heart of the French Quarter in the city of New Orleans, Dauphine Orleans Hotel can be found on the corner of Dauphine St. and Conti St., just 1 block west of Bourbon St., two blocks east of N. Rampart Street. Dauphine Street runs parallel to N. Rampart, and Bourbon Street. 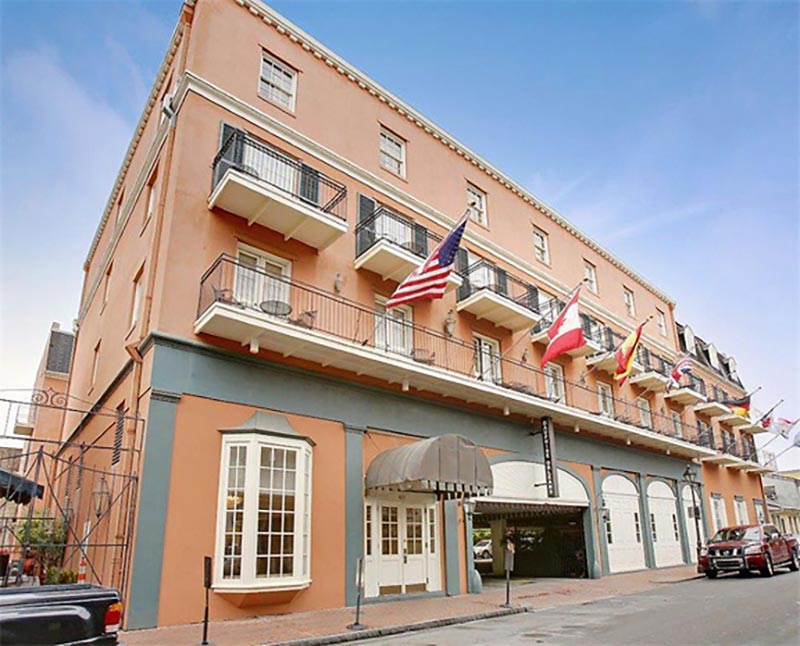 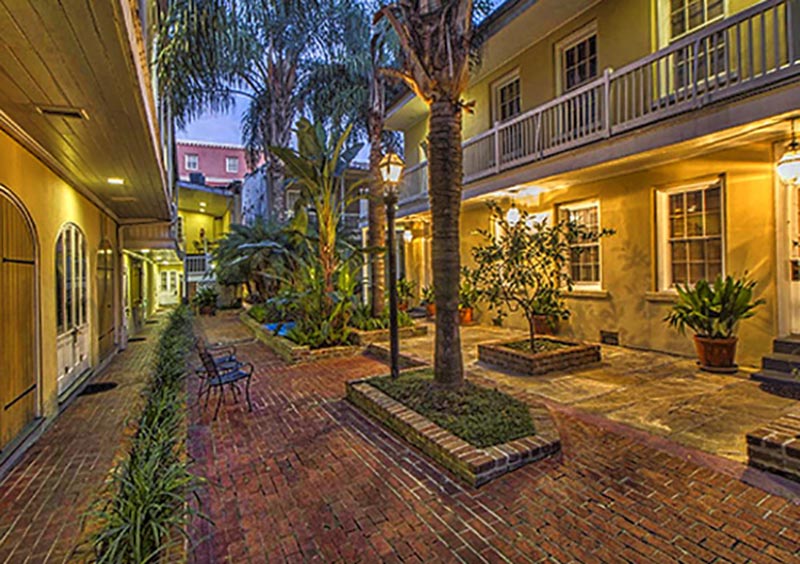