Skip to content
More From Dubuque More From Iowa

A dastardly bully met his end where the Old Jail was later built; Uh oh! 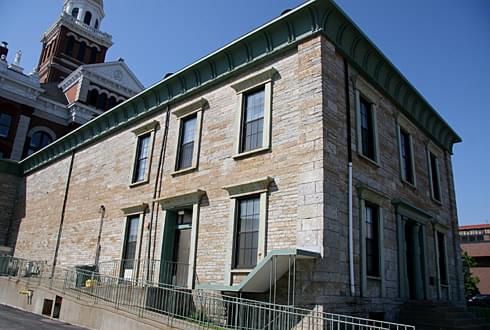 It sits back on its property, surrounded by an iron gate. There is a yard on the side facing Central Avenue. This two story building is shaped like a sideways T, laying on its left side.

This handsome, 1857 stone brick jail building, with Egyptian Revivalist architecture, is the work of architect John Francis Rague. Rague is known for his talent. He also created the Matthias Ham House, the Octagon House of Edward Langworthy, the Old State Capitol in Iowa City, the Old State Capitol in Illinois, and three buildings on the campus of the University of Wisconsin in Madison. It is connected to the beautiful Dubuque County Courthouse building on its right. In very cold weather, prisoners didn’t have to be taken outside in the cold.

There was a dungeon in the basement, for hard to handle guests of the county. The Old jail was used as holding cells for defendants who were on trial in the Dubuque County Courthouse and for neighborhood rowdies and petty criminals caught and convicted for their misdeeds.

Around 1958, the new jail was built across the street to better serve the community. The Old Jail is now a museum, and has a gift shop inside. 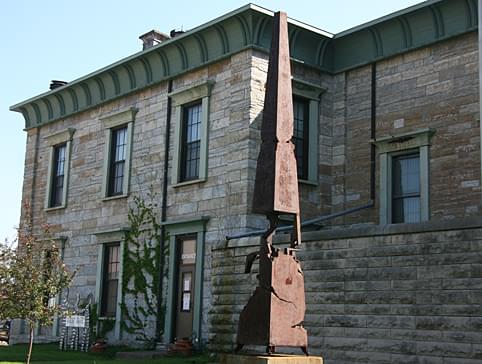 On June 20th, 1834, roughly 20 years before this jail building was built, a defendant, by the name of Patrick O’Connor, was convicted of murder, and was hung 20 yards from this jail site, the first person to face the death penalty in what was then the Iowa Territory. This was a very fast, speedy trial. Some feel it was a bit too speedy, that the jury wasn’t properly screened, and weren’t exactly non-partial, making this trial look like a Kangaroo Court.

The theatrical presentation presented at the Old Jail on November 2008 tells his story.

Patrick O’Connor was a dastardly character, not exactly a pillar of the bustling mining community of Dubuque. He was a man with not only a mean streak, but had temper and self control issues and a rather violent history. It seems that Patrick liked to get his way by terrorizing others. In Galena, Patrick became angry with the leading merchant, and tried to kill him by burning buildings and shooting at this merchant through the door. He was nearly hung by an angry mob, but escaped by the skin of his teeth, fleeing to Dubuque.

Not learning from his bad behavior, he again set himself up as the town bully in Dubuque. He shot a young, bright miner, George O’Keaf five times in the chest after forcing open the door of O’Keaf’s cabin. He was caught and nearly hung by an angry mob, but cooler heads prevailed. 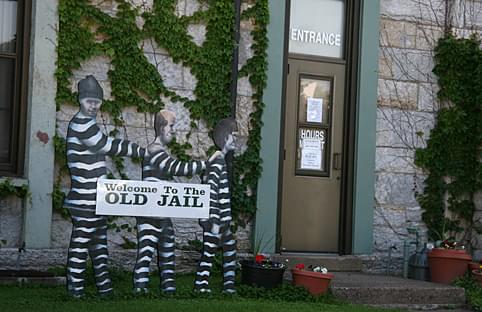 The next day, the trial was held under a large tree near the present Old Jail building. Patrick had a former employer in Galena as the defense attorney, a prosecuting attorney was appointed, and Patrick O’Connor picked his own jurors from the crowd.

Eye witnesses to this murder were examined, and each side gave a presentation to the jury. The jury deliberated and Patrick was found guilty. He was hung on June 20th, 1834, only a month after the murder.

The Entity of Patrick O’Connor may be stuck in this world for several reasons: Swift justice which he didn’t expect; thought he could get away with murder in the then wild mining town. His death probably frustrated his plans, taking him from life before he could accomplish his goals. Because of his violent past, Patrick may have been afraid to go to the other side.

Though this deed happened before this building was in existence, his spirit appears to haunt the land. When the new building was constructed, it seems that this entity moved in and made himself at home. It seems that entities can haunt a building which is located close to the outside place where they died.

The entity of Patrick O’Connor is said to appear on occasion to the living in this jail building, especially during the time that this building was used as a jail.

It is a beautiful building and is a lot better place to haunt than the outside yard. 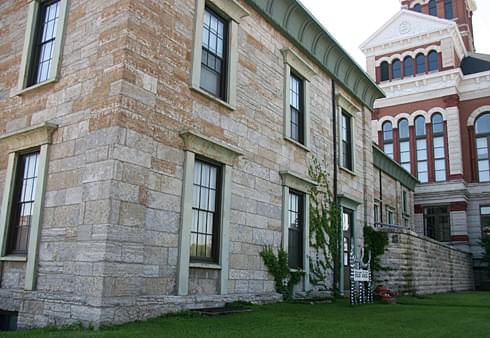 When asked by HauntedHouses.com, the current manager of the museum and store said that he hasn’t seen the entity of Patrick in the building, nor have any of his employees. However, it has been a town story/legend that the entity of Patrick O’Connor hung around the Old Jail, getting his chuckles, appearing to the easily scared living, perhaps still trying to be in control.

Perhaps, this entity only appears during the late evening, when he has the building to himself. Or, perhaps he has gone to the other side sometime after the building stopped being a jail. 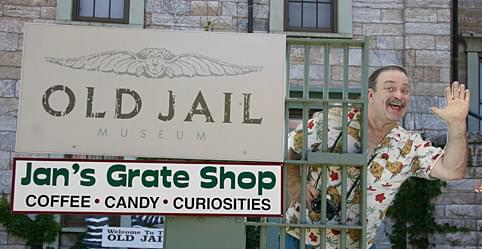 The Old Dubuque Jail (now a museum) is located in downtown Dubuque, at the corner of E. 8th and Central Avenue, which is just across the street from the current Sheriff’s Office & Jail, at 770 Iowa Street, Dubuque, Iowa.

Haunts in Dubuque Haunts in Iowa