A female entity who died prematurely attached herself
to an item and began a comforting routine.

When this item was moved to Steward Hall, she continued
to amuse herself that was her custom. 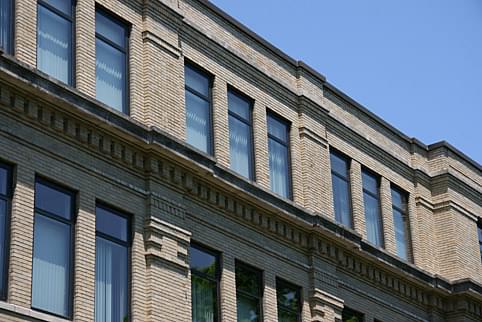 Voorhees Hall is an all-women seven floor residence dorm located in the middle of campus, along the edge of College Drive, and directly across the green from Greene Hall, the only all men’s dorm, built in 1938.

Voorhees Hall was built in 1915, giving it the distinction of being the oldest women’s residence hall on the COE College Campus. It was given as a gift from Mrs. Elizabeth R. Voorhees.

It was recently renovated in 2000 to better meet the needs of the 187 women who live here; from freshman to the sororities who occupy two of the floors. While the outside of this building still has “its stately traditional exterior”, the inside of Voorhees Hall is new and air-conditioned. It has a “comfortable lobby”, meeting rooms, two different kitchens in the lobby area and a small computer lab. The lower levels house “the Business, Residence Life, Academic Advancement Program, Chaplin, Registrar and Security offices.”

Stuart Hall – is located on First Street. This handsome building was built in 1910, and was called the Carnegie Hall of Science. It was designed by New York architect Edward L. Tilton, who also designed the beautiful immigration station on Ellis Island. The building’s first major renovation occurred in 1970. It’s name was changed in 1977 to Stewart Hall. In 2004, another major $2.9 million renovation kept the outside true to its historical design, but created the much needed space inside for a growing student population.

Nearly 36,000 square feet of new and remodeled classroom space and faculty offices was ready for use in the fall of 2006. This represents a 25 percent increase in the area available for instruction and department homes. Departments housed in Stuart Hall include psychology, business administration and economics, mathematical sciences, sociology, teacher education, and nursing.

A young student, Helen, was a college student, staying in Voorhees Hall in 1918. Helen was swept up in the flu pandemic of 1918, and died of her illness. Her parents donated a fine grandfather clock in her memory, which started out in her old dorm, Voorhees Hall, and has since been used in the other female dorms over the years. The clock wound up at Stuart Hall, which is class space and headquarters for the academic departments listed above. 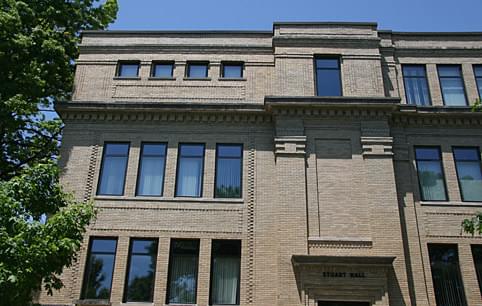 The entity of Helen has found a home in the clock itself. She traditionally leaves the clock late at night.

When the clock was in a Voorhees Hall, she would float to the lobby/parlor and play the piano.

She would go up the stairs to her old room. She would appear as a full apparition by the beds, slam doors and pull off the covers of sleeping women.

When they moved the clock to other dorms, similar occurrences happened. The grandfather clock was moved to Stuart Hall in the 1970s, where the entity of Helen began her ghostly routine – Probably slamming doors, going up stairs, perhaps appearing to the living.

Not Known: Unless the clock was blessed, the clock probably is still haunted. It isn’t known if the grandfather clock is still at Stuart Hall after the 2004 renovation, but chances are it is somewhere on campus.

COE COLLEGE is located near the 380 Interstate, along Coe Road, NE and First Street.