Home to entities traumatized by a botched hanging that ended this practice. 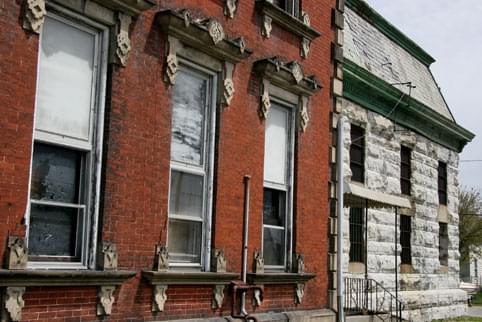 YIKES!! Tom and I visited this building on one of our 2008 road trips. Currently, this ominous-looking, old jail building, badly in need of TLC, looks the part of a creepy, haunted place, as it radiates an unmistakable aura which is hard not to feel, even to this un-psychic writer!

Designed by J.C. Johnson, known for his Indiana jail designs, this once lovely, 3 story brick building has been described as displaying “the highly ornamented Second Empire style of architecture, featuring a mansard roof, elaborate dormers, and carved sandstone details.” In it’s prime, this building was gorgeous. It is no wonder that this old jail is part of the National Register-listed Columbia City Historic District. 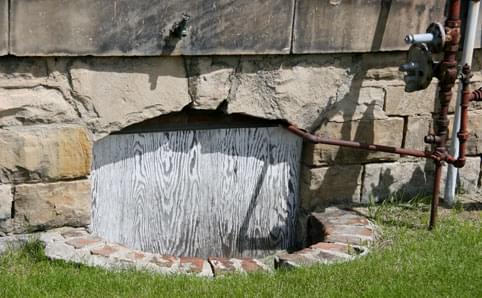 Built in 1875, it was probably used first as sheriff’s residence and jail, a popular way to house both the sheriff and the inmates in a way that the sheriff could keep an eye on his charges.

The term “Jailhouse” probably came from this type of arrangement.

Some say that this building was also used at some point as a courthouse, probably before a new court house was built just 1/2 block way. It was a convenient set up to have the jail attached to the courthouse, or right next door.

When the official jail was moved down the street, 4 blocks east, to 101 W Market St, this jail was retired, though county offices moved into the building and stayed until 1985, probably leaving when the heating system died completely. The building was sold/leased to the car dealer next door, who uses this old jail as a commercial haunted house once a year. Old buildings need to be maintained. As the building is only used once a year, the current owner isn’t motivated to keep the place in stellar condition, and it looks like it could be used as a haunted house 12 months a year now! Some citizens want The Sheriff’s House and Jail to be one of the city’s “crown jewels”, and are petitioning the city to buy the building, restore it to its former glory, perhaps make it into a historical museum, and then use it for “a variety of year-round uses.”

This suggestion is being seriously considered. Hopefully, this beautiful building will be better taken care of by the current owner, or someone else will step into rescue it before it is too far gone. 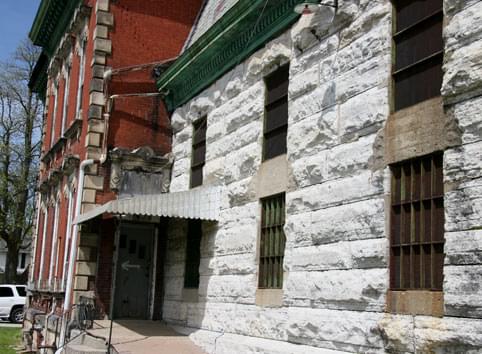 The infamous saga of Charles Butler:

Charles was the son of George W. Butler, M. D. and his wife Margaret A. Clover. Charles is described as being 5′ 8″ tall, blue eyes, light hair and had a scar over his left temple. Despite a promising start in life, Charles had a volatile temper, got satisfaction from bullying weaker people and developed drinking issues, with a tendency to take it all out on his wife, Abbie and their son; beating and abusing them. Finally, in a drunken rage he shot his wife in the back, while she pushed their son out the door to safety, in 1883. He was caught by authorities, and jailed at this Whitley County Jailhouse.

In March of 1884, when Sheriff Frank Allwein was out, and the Allwein family were entertaining guests, Charles and four other inmates silently escaped through the grub door used for the second floor tier cells. They went to a corner cell on the second floor, and removed a section of stone, leaving an opening to the roof. Using tied-together blankets as a rope, they quietly lowered themselves to the ground and temporarily escaped. Some say that they had covertly worked to loosen the stones. Others thought they had help from the outside. 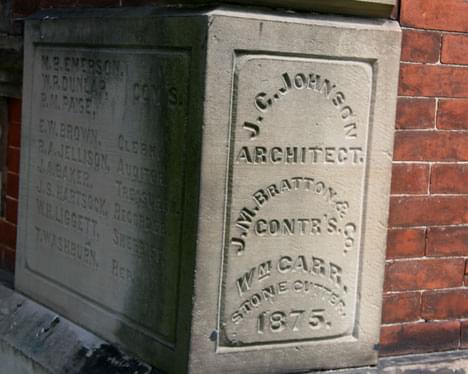 Sheriff Frank Allwein was very upset, blaming himself. He posted a 200 dollar reward for Charles Butler’s capture. Sheriff Frank Allwein caught up with Charles in Ohio, finding him dead drunk on the floor of a bar! Charles was tried in court on May 12th, 1884, and convicted by a jury of 12 farmers. Despite the overview of a special execution jury, when Charles was hung from a ready-made gallows in front of an audience, he didn’t fall hard enough to break his neck. Some say he stood on the hinges of the trap door, and slid down instead of falling quick. After 10 minutes of slowly strangling to death, he blacked out and was cut down. He was brought into one of the front rooms of the jailhouse. His heart stopped 3 minutes later.

This whole execution traumatized not only the executioner and Sheriff Frank Allwein, but the people who witnessed it. Needless to say, there were no more hangings in Columbia City.

At least one spirit calls this old building home. Other entities may also hang around the jailhouse as well. Entities that have suffered an agonizing execution, or experienced a violent death in prison have been known to haunt the area where they died. Other entities can’t let go of their responsibilities.

Entity of Charles Butler – Seems to be the strongest spirit here.

Upon entering the front door, one can feel the electricity in the air. Cameras have the tendency to malfunction here, and batteries are suddenly drained, even when the building’s electricity is shut off.

Investigators from the paranormal group Indiana Ghost Trackers were working there.

According to Jennifer Zamaites, they were taking a break in the costume room on the second floor. A chain mail costume moved on its own, and the sound of a male voice talking indistinguishable words came from the corner of the room.

Jennifer was sitting down for a rest in the dark, in one of the first floor cells, the second cell to last in this cell block. She felt a cold invisible hand grasp her leg, and move up her leg to her knee. She yelled for a light, to see if she could see this cheeky entity! No one was there.

In one of the front rooms, six investigators heard the sound of a man’s laughing, the sound of running feet, the sound of knocking and saw the curtains move by themselves, like someone brushed against them.

Is Sheriff Allwein still checking up on his prisoners and visitors, trying to make up for the huge jail break which happened on his watch? Is he still so traumatized by the hanging gone wrong that he can’t let go of his job he held in this building, and wants to be sure things are run in the right way?

The door at the top of the stairs which leads to the uppermost part of the jail, opens by itself, despite the efforts of the living to keep it closed.

On the uppermost floor, an apparition has been seen coming down the stairs from the jail to the Sheriff’s part of the building. This was observed by a Sheriff who lived there before the jail was moved to new quarters.

While sitting in a jail cell, investigators from Indiana Ghost Trackers had the strong sensation that they were being watched. They then heard someone walk down beside their cell, and continue down past the other cells.

A woman’s ashy foot prints have been seen on a wall on the third floor/attic area.

Other paranormal manifestations that could be attributed to an entity hanging around.

Footsteps and scraping along walls have been reported by workers in the building.

A blurry apparition has been known to appear and touch hands and shoulders.

Moving curtains, and the feeling of being watched.

There are many eye witness reports, and evidence gathered from paranormal investigations done by such groups as Indiana Ghost Trackers, which points to a building with entities unable to rest, and let go of this world. 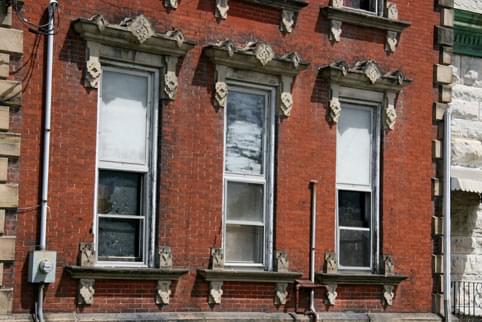 The old Whitley County Sheriff’s House and Jail building, now the home to The Haunted Jail attraction, opened every October, can be found on East Market Street, about 1/2 block past North Madison Street, near the corner of Washington Street. 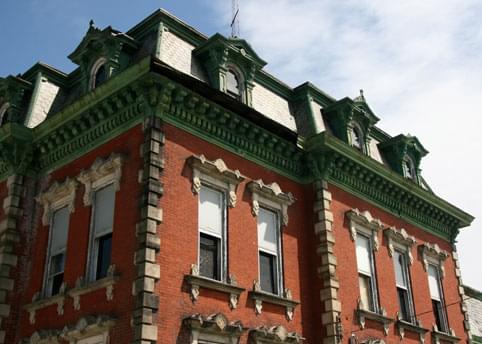