A spectral, frisky owner tries to help while continuing to enjoy his pleasures!

Today as of 2021, the first floor of the building of the former Ole St Andrew’s Inn is for lease, as the building has been renovated and transformed, ready to exist for a long time!

Ole St. Andrew’s Inn is no longer there on the first floor. As of 2021, someone had bought the drab building and renovated it beautifully, including the apartments on the 2nd  and third floor, as the properties in this zone are listed for for stores and residential use.

The  attractive apartments that exist there now are on the small side, but have the basic amenities desired and space needed for city apartment dwellers who work downtown.They still have the original hard wood floors and the decor that was restored, making them pretty classy.

The first floor, a 3,400 sq ft retail space has new windows and has been renovated as well; ready for the next restaurant, shop, tavern etc.; probably after the Covid Crisis of 2021.

Though renovated, this retail space still probably has all the areas needed for a bar or restaurant. The location is perfect for a restaurant and pub, or some other eatery. It may still have a kitchen space, bathrooms, storage areas etc.

When the Ole Saint Andrews Inn was still functioning here, the original building did have a cheerful green awning, which ran above the colorful yellow-trimmed windows and ran out over the sidewalk to the street, in a half circle shape, offering shade from the hot sun. It had a serious wooden door leading inside; a set of thick wooden doors with frosted windows.

Today, there is a black awning, with a new look; built to encourage business to open up shop here. However, with all the restrictions for restaurants and bars because of COVID, it may be awhile until a new establishment sets up for business here.

Unfortunately, it was closed on the day Tom and I came by for a visit during our 2007 summer road trip, so I relied on other sources to describe the inside of this friendly, popular neighborhood watering hole and eatery.

Inside the Ole St. Andrew’s Inn, one would see  that the restaurant area surrounded a horseshoe-shaped bar. The spacious inside was trimmed with “dark oak and hunter-green accents”. The “low-slung” tables have high-backed, British-style chairs. There were also “six crescent, black-leather booths”, that were removed in 2004, and replaced with wooden chairs and tables.

The walls were decorated with scenic pictures of Ireland and Scotland, and pictures of the 1754 Royal and Ancient Golf Club at St. Andrews. Golf clubs and related items also adorn the walls.

On the north wall, there was an Anglican coat of arms painted on a paned glass located there. There was also a juke box on the wall, and the customary pool table and dart board to provide chuckles while enjoying your Scottish brew!

The rear of the pub featured a small pool table and big screen that is pulled down for football games and karaoke, or even a band for pub music.

Ole St. Andrew’s Inn had a home-like, comfortable, warm, welcoming atmosphere, where people came to enjoy conversations with friends and strangers, and often enjoyed conversations with the cordial staff. Food on the menu included delicious shepherd’s pie, fish and chips, pork chops, lamb stew, various cuts of steak, sandwiches and bar food, which goes along nicely with beer or other alcoholic drinks.

The building which housed The OLE ST. ANDREWS INN was built sometime in the early part of the 20th century; (I’m guessing the 1920s?) and has housed some sort of bar/restaurant for many years. It at one time was probably a place to spend the night as well, or live long-term because it has a second and third floor above it.

In the 1950s-1960s, one establishment which existed in this building was a lively Scottish tavern known as Edinburgh Castle Pub, offering food and alcoholic beverages of all kinds. It was owned by a colorful character, Frank Giff, who was a very friendly, outgoing sort, who always made his customers feel welcome.

Frank had a weakness for alcohol; his favorite being Vodka. He was a ferocious drinker and would often drink himself into a state of oblivion in one of the booths in his pub. One morning his wife Edna found Frank dead, probably from alcohol poisoning. Some say that he fell in his drunken stupor off the bar stool and hit his head, which is what some claim killed him.

Edinburgh Castle Pub was purchased by Jane McDougal and son Blair, who continued to keep the charming Scottish theme and atmosphere, offering among other things, dark Scottish beer. Edinburgh Castle Pub earned the evaluation from the Chicago Bar Guide of being “an overlooked gem. In the middle of Broadway, the genial staff chats you up and makes you happy.”

Often on the weekends, live Irish and jazz music performers would come and play for an appreciative audience. Wednesday night was Karaoke Night. This pub was rented out to groups as well.

While some in Chicago complained about the change from being strictly a Scottish pub to being the more broader British Isle pub and eatery, The Ole St. Andrew’s Inn was again immensely popular with the local neighborhood, and had retained its friendly, easy-going atmosphere, and great selection of Scottish Brews!

In 2004, the pub changed hands again. The pictures shown here are from that era. The changed the color of the awning to red, but kept the classic wooden front doors.

They modernized the inside a bit to please new patrons coming into the neighborhood; loosing some of the old booths for something more up-to-date. They may have been the owners who started the outside eating area in the space between buildings.

Because this building has such good structural bones, owners of this building were not afraid to change  and renovate the building to suit their business needs. The current owners have done this as well. I hope the pandemic of Covid ends this year so another pub can move in and be a source of food and entertainment once again; bringing in more income for the owners of this fine building. 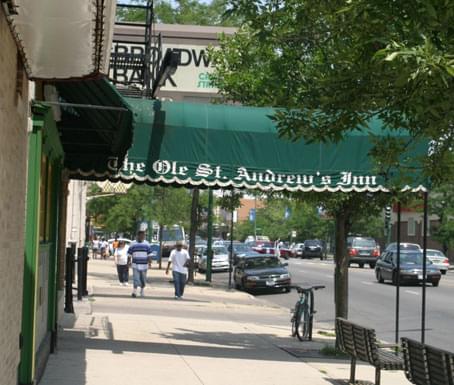 People who die unexpectedly or before they are ready, often are not ready to go to the other side and stay to do what they loved to do while alive.

Bair Bistro, WA (A spirit of a former owner who ran a hardware store here, still sticks around to try to help the staff who work here).

Eldridge Hotel, KS ( The spirit of Col. Shalor Eldridge who courageously rebuilt this hotel as a symbol of brave resistance against pro-slavery bullies, still resides in his forever home and hotel; along with members of his family who visit him. He enjoys being an encouraging presence).

Brumder Mansion, WI (Spirits who worked In the 1920s’ speakeasy in the basement were shot unexpectedly when the mob from Chicago closed up shop because they knew too much. They still work here helping current owners foe free).

Spirits still have the same personality and like to do their favorite things that they did while alive.

Heathstone House Museum, WI (Mr. Pride ran a tight ship with his businesses while alive, and as a spirit he keeps a careful eye on the people who lead tours and their visitors).

Bullock Hotel, SD (Seth Bullock was a brave lawman and entrepreneur  who knew what he wanted in his hotel while alive.  He became really active after gaming was introduced; becoming a spectral host as well as keeping an eye on guests and keeping the employees on their toes).

Stanley Hotel, CO (Mr. Stanley wore many hats in running his hotel, and he still does as a spirit).

The Ole Saint Andrews Inn, IL (While alive, Frank loved his business, his love for Vodka, to flirt with women and show hospitality to guests).

When people die because of something they did or didn’t do, it is sometimes hard to admit their error and continue on as best they can as a spirit.

Fort Worton, WA (A guard at the old jail building accidentally shot himself while cleaning his rifle).

Palace Theatre, NYC (A high wirer performer fell to his death, and still tries to  get across the wire today without falling).

Stranahan House Museum, FL (A young man who loved sex with prostitutes died from TB that he caught from one of the lovely ladies he met in a brothel).

THE OLE SAINT ANDREWS INN, IL (Frank was pretty drunk from all the Vodka he was drinking died unexpectantly.  He didn’t want to admit that it was his drinking that caused his premature death. So he continued on, as the spectral owner).

When Frank Giff suddenly died in one of his pub booths, or fell off the bar stool, it seems that he wasn’t quite ready to go onto the other side, and decided to stay and “help” the living in running his establishment, and still doing what he loved to do!

Jane and Blair McDougal, the staff and customers were the first ones to be made aware of this entity’s presence.

Glasses would fly around and break by themselves.

Cases of beer, glasses, ashtrays and other items move around by themselves.

The cash register, which is on a lazy Susan, moved by itself.

Lights would go on and off without the living’s help.

Younger women would sometimes feeling a caressing, cool unseen hand on their knees.

Other people are still being touched by a friendly unseen hand, as if to welcome them.

This hospitable entity’s sometimes present when people from the Ghost tours come in and visit.

Former owners of the pubs that existed here after Frank died had many experiences with this spirit, as did their patrons. Staff also could tell about Frank’s activity after having contact with him.

I couldn’t find on line any hard evidence of paranormal investigations conducted here that were made public. Author and investigator, Ursula Bielski probably did an investigation here before she put her story in her book about haunted Chicago that is listed below under the Sources Include section.

Perhaps but not known for sure until another establishment finally moves into the commercial space on the first floor.

It was definitely haunted by the spirit of Frank during the eras when an active Pub existed here; if one believes the eye witness accounts.

Perhaps the place gave off such a friendly, welcoming aura because of the spirit of Frank, who was still a welcoming unseen presence.

This friendly spirit did remain active when new pub owners, Jane McDougal and her son, Blair took the helm of The Edinburgh Castle Pub. His antics soon gave this pub the recognition as being haunted, earning them a spot on the Chicago ghost tour groups, which was great for business.

Other people in the following years also have experienced similar manifestations. If a pub and restaurant finally do move in and establish their business here, the spirit of Frank may just reactivate and resume his activities. 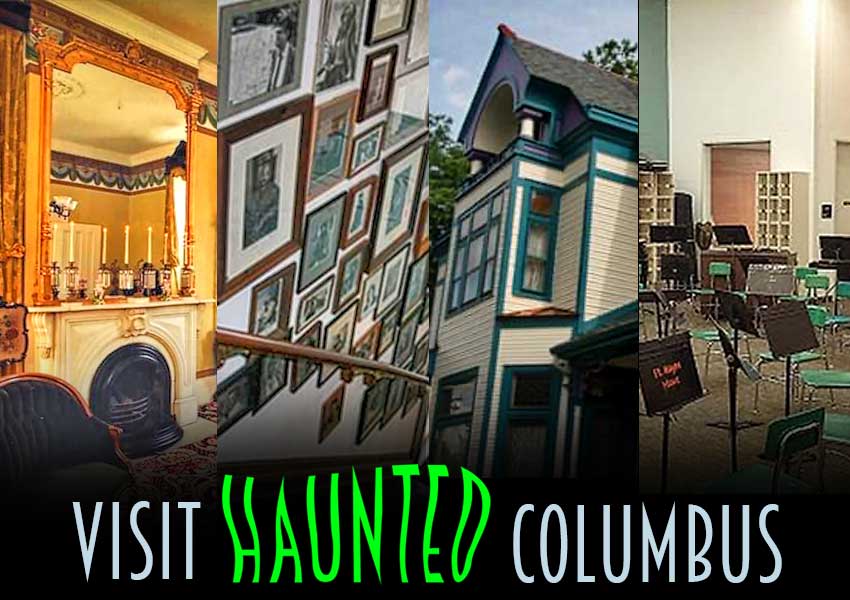