Spirits of Thespians who still want to perform have made this place their home. 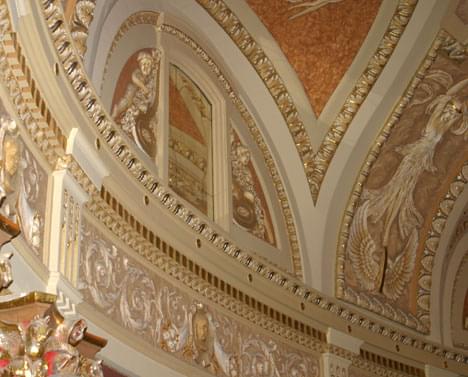 After being wowed by the ornate exterior, one is transported into a world far away from the troubles of life, just by walking into the interior!

The Esplanade, or Inner Lobby:

This grand space is designed after the Hall of Mirrors in the Palace of Versailles near Paris, France. This grand space originally had four huge thrones, which were sold to an antique dealer at the time just before the renovation. Receptions and social events are held here today.

The Arch between the Esplanade and Rotunda Area:

Was carefully copied from the Arc de Triomphe in Paris. In the center of this arch is the head of the goddess Athena.

Can be described as being spectacular, a feast for both the eyes and ears; as the decorum is splendid, and the acoustics are always perfect.

The Rialto Theater has long been the scene of many theatrical and musical performances since its very beginning in Vaudeville, for good reason. It is one of the most beautiful and glorious places to perform, not only for the over the top decorum, much like a palace, but also for the lovely acoustics, making every seat in the theater, whether in the balcony or the main floor a great place to enjoy the performance on stage.

The Auditorium’s Glorious Rotunda and Dome:

The elegant rotunda artfully presents the Goddess of the Eastern Star, encircling the inside of it. The rotunda is surrounded by 18 Corinthian-style columns, made complete with a dome, patterned after the Roman Pantheon.

The suspended, impressive, 20 feet long, eight-arm crystal chandelier, the “Duchess,” can be described as a bronze giant of some 200 fixtures, 250 lights. The large prisms in this mother of all chandeliers are of the Marie Therese cut, a popular style used in the “Rococo period.”

Has a proscenium arch with “the grand drape.” Carving of Apollo and other gods are in a rectangular area of the arch.

The Pride of the Rialto:

Home to its original “golden voiced” Barton Grande Theater Pipe Organ, which was first used in the 1920s, to play background music for silent movies and for vaudeville as well. This marvelous organ has the ability to provide a variety of sounds and sound effects.

It’s Organ chambers are flanked by ornate balconies on either side, with pipes beautifully disguised by glittering floral grills created in the Byzantine style. 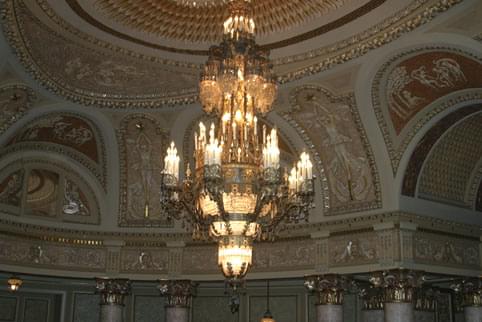 Two years after the ground was broken for this labor of love, this inspiration of the Rubens brothers, all six of them: George, Jules, Louis, Harry, Maurice and Claude.

The Rubens brothers made sure things were done right, starting with the funding, picking superior architects, contractor and artisans. Wisely, the Rubens setup a well-planned organizational structure which would keep the theater running smoothly, being sure to keep their hand in its affairs, to guarantee it.

All worked together to create a truly awesome, air-conditioned theater, which the people of Joliet and surrounding areas adored and enthusiastically supported with their patronage throughout the 20th and 21st century as well.

A pair of Chicago-based architects, C. W. and George L. Rapp, designed the ornate exterior, art-filled decorum and structure of the interior, doing such an inspirational job and having so much fun and personal fulfillment in doing so, went on to design and build other ornate theaters throughout the mid-west.

The construction company picked for this project, surely a daunting responsibility, was Kaiser-Ducett, who also went on to be the main contractor for many of the exhibits at Chicago’s 1933 World’s Fair.

The main sculptor was the enormously talented Sicilian immigrant, Eugene Romeo of Park Ridge, Illinois, whose work can be seen also on Board of Trade, Chicago Daily News Building, Soldier Field, Merchandise Mart, Blackstone Theater, Wrigley Building and the Joliet Township High School Auditorium, though he is now gone.

Eugene Romeo created magnificent Greek, Roman and Byzantine sculpted architecture, decorum and works of art inside and outside the theater, making it a palace which takes one’s breath away in its beauty and detail, truly a masterpiece, which inspired a firm and determined loyalty from the public, the dedicated staff, the owners, and the artisans themselves who performed here.

This wonder of Illinois stood up well throughout the years, but even this building needed major restoration work by the the 1970s, which would require a tremendous amount of money. It wasn’t divided into a four-plex, and didn’t make enough money to afford the bill to fully restore this now long in the tooth theater.

YIKES! The owners were stuck between a rock and a hard place. To save the theater from a sale to land developers, the theater needed a lot of capitol! This monumental task was undertaken by a determined community, who would not stand for this theater to have a date with the wrecking ball.

A feisty, spirited group of citizens took the challenge and began the wildly successful “Save the Rialto Campaign.” Dorothy Mavrich, president of The Rialto Square Arts Association, got the campaign rolling, and all stops were pulled out to offer an alternative plan to the awful thought of selling the land to developers, who would knock it down and put up who knows what! 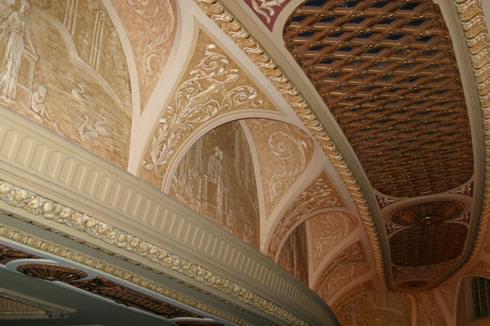 Businessman, Christo Dragatsis, assisted in requesting and getting monetary support from the city council, the state government and federal officials. Former State Representative, LeRoy Van Duyne, was “instrumental” in obtaining the money needed to purchase the theater properties from the probably relieved owners, rescuing them from their awful predicament and saving the theater for the public. The Rialto Square Theater was placed on the National Register of Historic Places, becoming forever safe from destruction.

The Rubens brothers would be pleased that the people worked together to save their “Palace of the People,” restored it and now use it for dramatic and musical concerts, and for social occasions/special events as well. For instance, the theater is rented out to weddings and receptions. 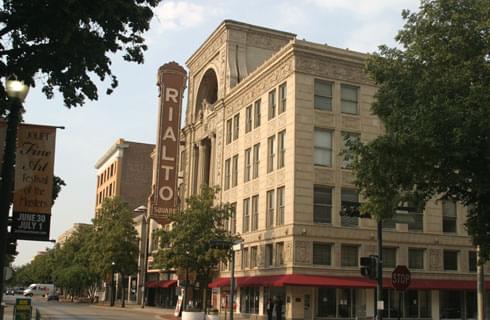 Place where people while alive enjoyed going to to forget their troubles for a time, often are still a draw for these spirits of the people who loved these places of joy and comfort.

Natatorium, TX (Spirits still come to enjoy the music played and the gaming of years past on the second floor).

CRYSTAL BALLROOM, OR (Spirits still enjoy the music and like to dance as well).

Music Hall, MO (Spirits still love to come here and see what is on the stage).

Rialto Square Theatre, IL (Spirits of people who so enjoyed leaving their troubles for a few hours outside, still enjoy coming in their after-life).

Many people throughout the years found The Rialto Square Theater a place to escape reality, a glorious palace with air conditioning which represented a glimmer of paradise, to enjoy a great film or stage and musical event with great acoustics.

Spirits of Thespians who loved to be on stage, often yearn to be acting or performing one more time. As they can’t in spirit bodies, they can still enjoy the living’s efforts and pretend to be on stage and enjoy the theatre.

Mantorville Opera House, MN (Spirits get really involved with the performances held here and participate in ways that they can).

Sacramento Theatre, Ca (Spirits of thespians are very enthusiastic about the plays, and the preparation of the living thespians to go on stage; being their greatest supporters).

Pantages Theatre, CA (A female wanna-be performer often sings along with the musicals seen on this stage).

Rialto Square Theatre, IL (Spirits of thespians who performed there found their experience to be more than memorable, so they have been known fully enjoy the theatre).

Sudden or unexpected death can sorely disappoint thespians yearning to be on stage.

Syracuse Theatre, NY (Some spirits here still have a tremendous work ethic, and if they died before they could perform, they still long to do so; finish the gig or job, and/or still be involved).

Pittsburgh Theatre, PA (An actor died of a heart attack before he could go on stage to perform a role he had worked hard on to prepare).

Maysville Opera House, KY (A performer died before being able to finish her performances here).

Rialto Square Theatre, IL (Accidents happened in this theater, supposedly in the auditorium’s balcony that killed two thespians before they could perform). 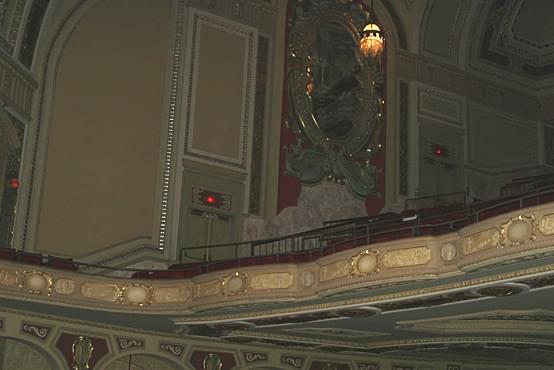 Thespians from the past here love to be noticed! Some want to reside here in their after-life! Others yearn to be in the performance that they had worked so hard to prepare, only to die suddenly.

Spirit of a Female Thespian

She enjoyed popularity while alive.

Staff, workmen and patrons have reported seeing a female apparition floating around in a glamorous costume.

After the theater is closed to the public, she becomes more active letting the living know she is there.

Some report that she is the spirit of a well-known performer of yesteryear who loved to perform in this glorious place, and has obviously decided to stay here in her after-life instead of going to the other side.

Perhaps she isn’t ready yet, and wants to relive her glorious past which she experienced on this stage.

They are dressed in costumes of the play they were involved with, before they died from a fall from the balcony.

Their unseen, benign presences are also felt in the balcony, by the living.

Staff, workmen and patrons have all witnessed the spirit of the female thespian floating around the theater and other personal experiences with this once fine actress.

Many workers who set up and take down scenery, work behind the scenes have spied the see-though couple up in the balcony.

A Joliet paranormal investigation team, Sight Paranormal, led by Rob Hall investigated the Rialto Square Theater, bringing a bunch of other investigators from other paranormal groups with them, to cover the fee charged by the theater to be allowed to do so.

Rob’s wife went up the stairs to the right side of the balcony, and while standing there, felt the presences of unseen others, keeping her company.

Rob Hall of SIGHT PARANORMAL explained to HauntedHouses.com what happened next.

“My wife was up there and had yelled down to another member to take a picture up there as she said she felt like there were others up there with her. She (the other member) took the pic and what we got was originally a darker photo and you could barely see anything.”

Rob Hall also told HauntedHouses.com, “Many of the workers had reported seeing them there.”

At the very least, an entity of a female performer perhaps is longing to give one more show, and doesn’t want to leave this glorious theater, and two entities of an actor and actress who suddenly died before they were ready, haunt the place where they met their untimely deaths 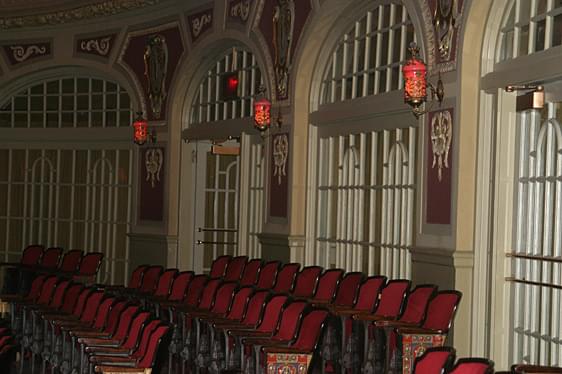 The Rialto Square Theater made of granite can be found in the old down town section of Joliet, Illinois, on N. Chicago Street which is between W. Cass Street and W. Jefferson Street Just west of N. Scott Street (53). 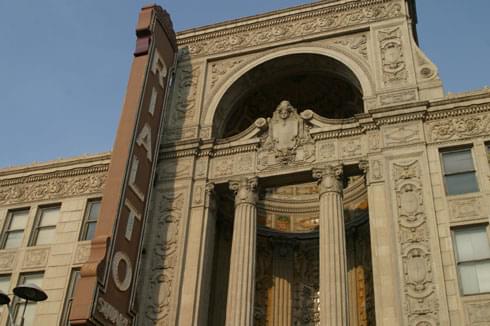