Frazier Hall has its spectral music and drama enthusiasts who find ways to entertain themselves.

Graveley Hall – Is home to a friendly, helpful entity and perhaps some not so happy spirits who rashly acted.

In 1810, trappers came and started the development ball rolling, which resulted in city hood for Pocatello in 1882. In 1834, Fort Hall was built, only 8 miles north on the Oregon Trail. During the gold rush of the 1860s, stages and freight lines came through Pocatello’s Portneuf Valley which all traveled to the West Coast and back again. The railroad, originating from Utah, was built through Pocatello in 1876, which wound up connecting Portland, Omaha and Salt Lake City.

Idaho State University began simply as “a people’s school”, known as the Academy of Idaho, which offered college prep courses and industrial courses. It served as a place to learn for all classes of people in their community; similar to a junior college. It opened in 1902 with a main building, later called Swanson Hall, and a 25 bed residence hall for men, later called Faris Hall. Women started to stay on campus in 1906 when a women’s dorm was opened, later called Turner Hall.

This institution began to grow and by 1915, it had evolved into the Idaho Technical Institute. Pocatello had become the population center for the state of Idaho. The School of Pharmacy was started and the returning veterans caused a huge enrollment jump, making new construction a must.

It was a 34 year struggle for Idaho State University to become a 4 year University. First attempt, led by college President Charles Frazier, was narrowly defeated by the State Legislation in 1925. Though he was dismissed as president by the State Board of Education, the Dramatic and Fine Arts building, Frazier Hall was named for him in 1925. A compromise was finally hammered out in 1927, and the college became The University of Idaho – Southern Branch, under the wing of the northern college; University of Idaho, though they had their own budget and financial status. Finally in 1947, University of Idaho – Southern Branch became Idaho State College.

In 1948, 2000 students filled the campus, studying in a major offered at one of the four schools – Liberal Arts, Pharmacy, and Industrial training and Business; But academic opportunities kept on growing. “In 1959 master’s degrees became available in education, English, and physics; Pharmacy becoming a five-year program; and establishment of a two-year program in dental hygiene.”
In 1960, Dr. Donald E. Walker became president and started the push for university status for the college, which only took 3 years to accomplish. In 1963, the college became Idaho State University!
Growth in academic opportunities, in campus’ physical growth and in student population has taken off since then. “In 2000, ISU has more than 12,500 students, eight colleges and schools, 68 bachelor’s, 52 master’s, and 11 doctoral degrees, and 44 certificate programs in applied technology.”

Some elements of the Speech and Theater Departments are still located here.

Frazier Hall had long been the home of ISU’s fine theatre program. It has 4 floors and basement, a large 800 seat Proscenium theatre, a 140 seat Little Theater, a costume shop, a design studio and classrooms. Most new theater productions will be held now in the newly constructed L.E. & Thelma Stephens Performing Arts Center, a modernized larger building which meets the needs of the growing student population.

However, it is thought that some entities still prefer to hang around Frazier Hall.

* An entity named Alex haunts the building. Loves to play tricks on the living.

* Unseen presences don’t allow the fact that they are dead to stand in the way of their piano practicing or enjoyment of the theater!

* Apparitions of theater lovers have been known to appear and sit in the audience.

* Footsteps are heard traveling around the fourth floor.

Departments which are located in this building include: Anthropology, Economics, Family Medicine & GIS Training and Research.

Named after Lottie M. Graveley, who was the first woman to be appointed to the state board of education. Built in 1939 to be a women’s residence hall, It was later renovated and structurally changed into classrooms and offices. Several people committed suicide in this building.

* A strong presence is felt in the building.

* Just locked windows have been found opened a few minute later when no one else living was in the building.

* An obliging, friendly entity has been known to open doors for the living.

Stories from the custodians and others who find themselves in these buildings have given their testimonies. Ghosts of Idaho paranormal investigators have done some investigating, and have listed both buildings as being haunted. 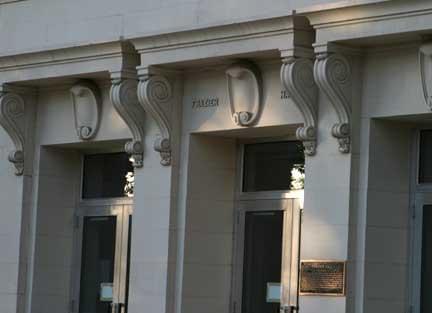 The city of Pocatello and The Idaho State University can be found where 15; North-south and 86/84; West Interstate highways meet.

The city of Pocatello, which can be found along the old Oregon Trail, on the Snake River Plain, was long known as “The Gate City” to the area’s “economic and educational development.”