A spirit is known for her warm hospitality.

The Philemon Bryan House is a small, cozy two story, turn of the century Florida house, sturdily built to last the ages. It’s design is the then “fashionable Colonial Revival style.”

“Structures are typically two stories with the ridge pole running parallel to the street, have a symmetrical front facade with an accented doorway, and evenly spaced windows on either side of it. Features borrowed from colonial period houses of the early 19th century include elaborate front doors, often with decorative crown pediments, fanlights, and sidelights, symmetrical windows flanking the front entrance, often in pairs or threes, and columned porches.”

The Philemon Bryan House has the honor of being the oldest remaining example of “residential masonry architecture” in Fort Lauderdale. Inside, it probably had a parlor to receive guests, a dining area and perhaps a library. Upstairs were the bedrooms and a bathroom, as the Bryans were wealthy.. A kitchen was probably added onto the back of the house. 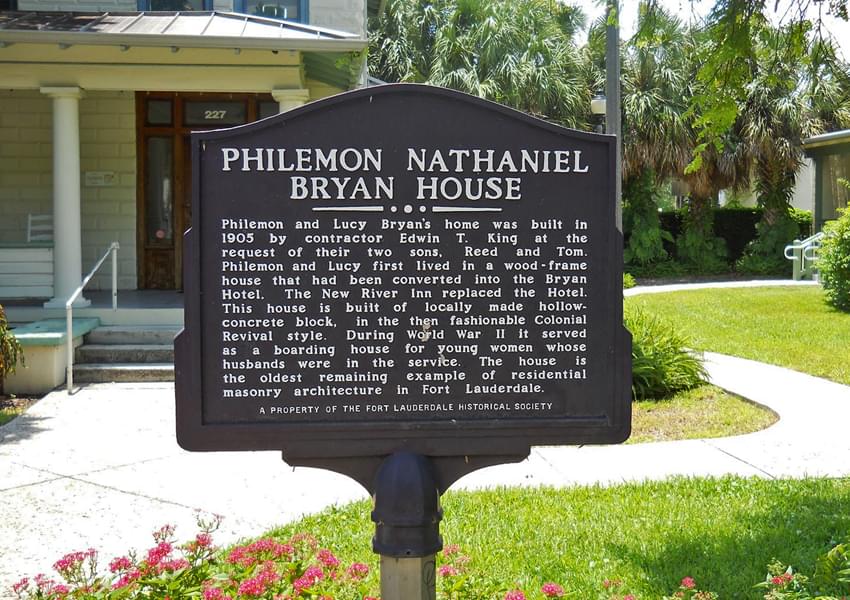 Mover and shaker and entrepreneur Philemon Nathaniel Bryan came to Fort Lauderdale with his wife Lucy Catherine Bryan and seven children in tow to start over again after a freeze took out his entire crop of oranges in Smyrna, Florida, In 1895. He got back on the horse and bought 840 acres of land and planted twenty-five orange trees. He was on his way. His friend Henry Flagler gave him the responsibility of laying railroad track from Pompano Beach to Miami which he did with the help of his two sons. The New River Railroad that ran from New York to Key West made it to Miami by 1896.

Also, in 1895, Lucy was given her own home, built by contractor Edwin T. King at the request of the Bryan’s two sons, Reed and Tom. Lucy finally had a home of her own; a needed private space made from the same hollow bricks that were used to build the New River Inn. Lucy was one happy woman and spent the rest of her life here until she died in a sudden accident at the age of 72.

During World War 2, the Philemon Bryan House was a boarding house for spouses of deployed soldiers .After the war ended, it became a commercial Yoga Center. Women would come, get dressed in one of the former bedrooms, and enjoy the Yoga session. It was during the Yoga years that the female spirit of Lucy started to make an appearance.

Eventually, the Historical Society of fort Lauderdale bought this cozy home, restored it and renovated it into office space for themselves and another group, which happened to be the American Institute of Architects. 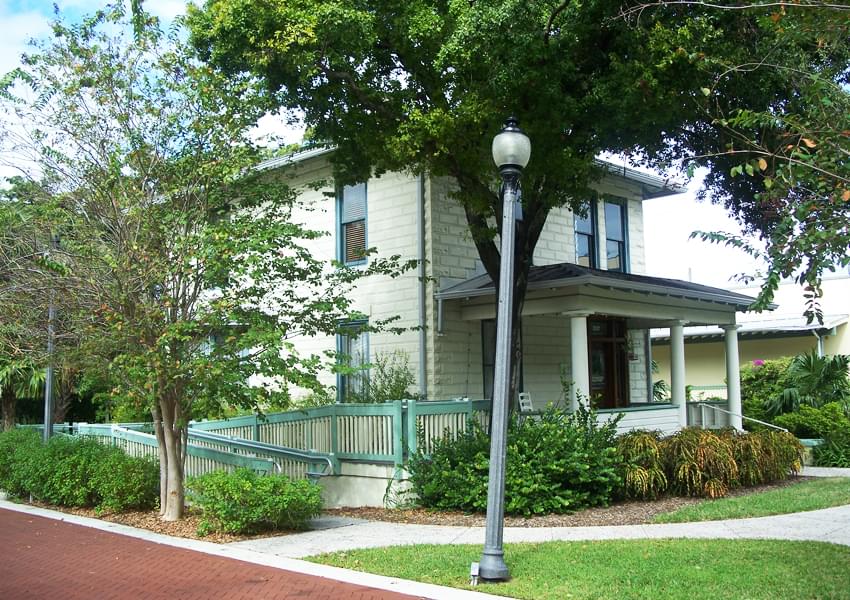 People who were a friendly sort while alive, loved being a good hostess and enjoyed company, sometimes continue to do so when in spirit form.

Lucy was known for her warm hospitality.

People who die quickly from an accident /illness/natural causes sometimes aren’t ready to go to the other side quite yet, especially if they have a special place in this world.

Lucy Catherine Bryan had to wait a long time before getting her own cozy house. She loved company coming to see her. One day, Lucy Bryan, then 72 years old, was on her porch shelling peas for the evening dinner when a car parked in front of her yard. She stood up and started down the stairs to greet her friends, when she slipped on a pea pod and broke her pelvis. She died a few days later. 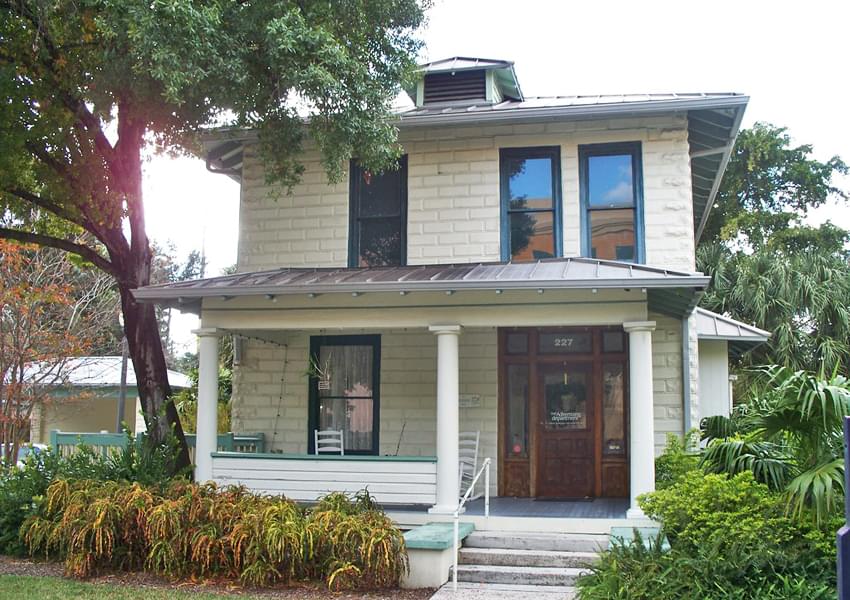 Theory: During WW 2, the spirit of Lucy may have given the worried women staying there comfort and love as an unseen presence to soothe her guests staying in her house; giving them peace. It wasn’t reported but a very possible theory.

Her first reported appearance was when a women’s class of Yoga students started having classes in her old living room. She must of been thrilled to have women come once again to her home.

When women would get changed into their yoga outfits, they would look in the mirror there to be sure nothing was amiss. They would be startled to see in the mirror a solid-looking elderly lady, with her silver hair in a bun, and dressed in a black wool dress, looking at them with her hands clasped, with a friendly look of welcome on her face.

When they turned to confront this kindly lady, she wasn’t there and had disappeared in the mirror as well.

Women have experienced her kind, helpful, friendly presence when they have been in her house, giving many people personal experiences with her.

No paranormal investigations have been allowed here by the Historical Society of Fort Lauderdale.

Probably so, though this spirit keeps a low profile, perhaps just bringing a sense of peace as an unseen presence to any worried woman who works for either the Historical Society of Fort Lauderdale or the office of American Institute of Architects. The Historical Society of Fort Lauderdale claim that Lucy isn’t there; but perhaps they are shielding her from ghost hunters and the public from bothering her. Interestingly, they do say that if she was here, she would be pleased at all the restoration work they have done to her house, returning it to its former pristine shape. 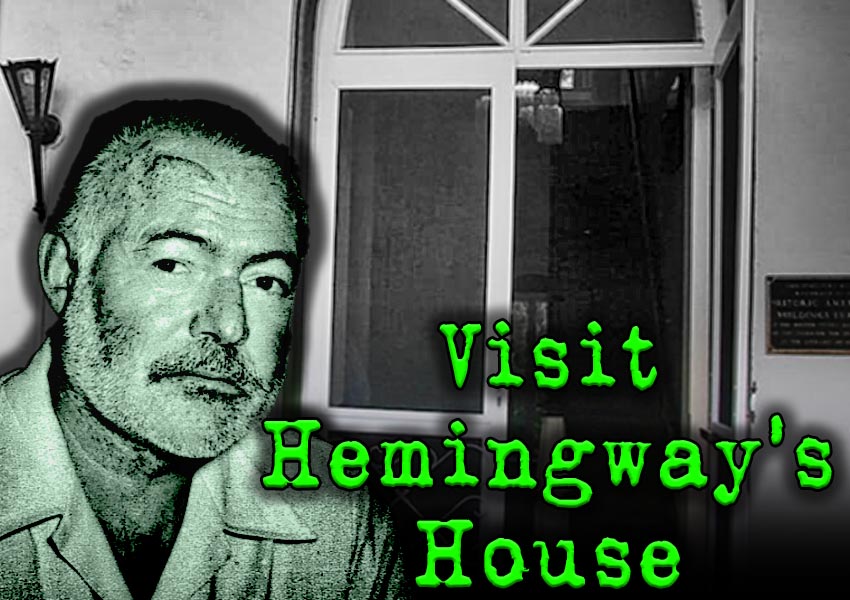 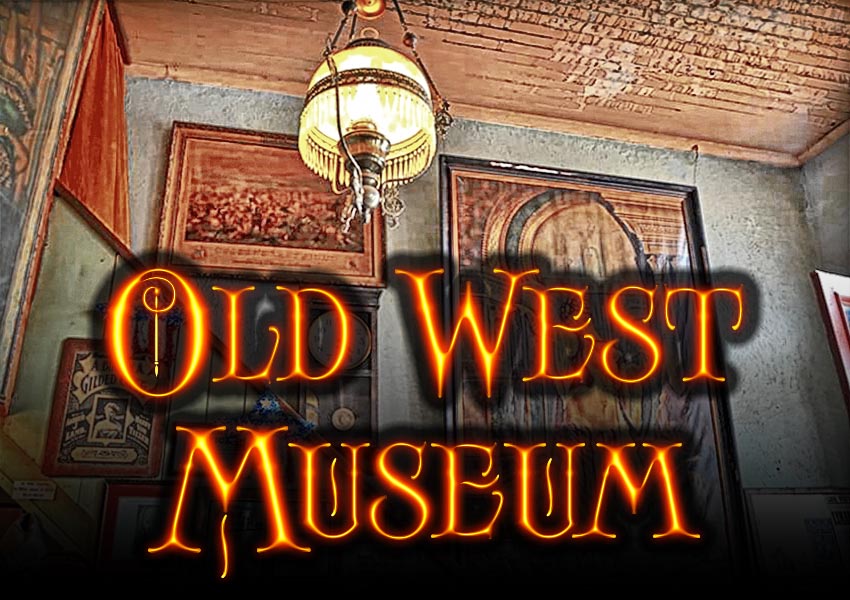