This beautiful building can be found in the downtown section of Bartow, Florida, directly across the street from the new Courthouse. 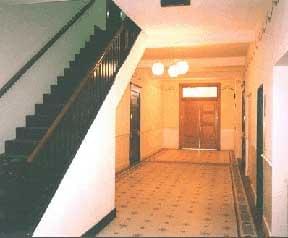 On this plot of land, two Polk County Courthouses were built here. One was built in 1883, and the current building which was up and running by 1909, has been a museum since 1997, when renovations were done along the lines of the original design and architectural plans, making it a beautiful building to house museums, the courtrooms themselves and genealogical library. The courtrooms are now used for ceremonial events, including formal installation of county office holders and are also available for use for court purposes, if needed. 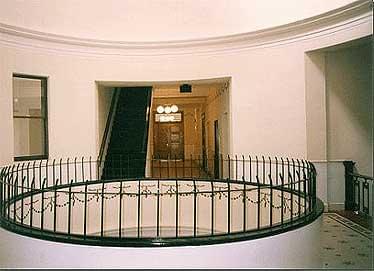 During the 20th century, the courthouse needed to grow in order to accommodate the growing population. There were two major courtrooms in the original courthouse, one for circuit court, the other for the criminal court of record. Over the years, the space in the building was chopped up, and several smaller courtrooms were built. During the 1980s — 1997 renovation projects, the original two court rooms were restored.

Listed on the National Register of Historic Places on August 7, 1989, The Polk County Historic Courthouse retains its original architectural integrity. In use from 1909 up until 1987, it was constructed in the neoclassical architectural style which was very popular in Florida. Some of the characteristics and features include: “cross-gabled roof surfaced in pressed metal shingles and plates, having a central dome, which is topped with an orb, spire, and cupola, contains ribbon windows and four clocks.”

Also one sees “secondary roofs, which are capped with orbs, provide decoration and balance in relation to the central dome. Encircling the building are Medallions and a wide frieze band. Dominated by full-height porticos and supported by Corinthian columns, the north and south facades feature classical pediments ornamented with applied garlands and vent shields. Brick was used as the exterior wall fabric, and double hung sash windows provided natural interior lighting.” 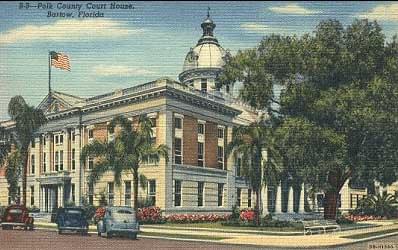 Five to six entities make the courthouse their home, all the result of the drama which happened in both of the courthouses which existed on this plot of land. For three of the entities, it is known who they were, one or two are probably known and one is still a mystery.

In 1886, the Mann brothers, who were accused of killing Marshall Silas Campbell in the street outside the 1883 courthouse, were lynched by a mob, before they could be tried in a court of law. After dying from this hanging via the mob action, their bodies were on display in the courtroom in the courthouse which stood where the 1909-1987 Historical Courthouse now exists.

Boiler room Accident — The boiler, which was located in one of the four basements, exploded. A worker was burned badly, causing his death.

The Lady in White — It hasn’t been discovered why she haunts the building, but she obviously has strong ties to one of the court buildings.

When a Judge and his wife were killed in West Palm Beach, their mobster killers were tried in the 1909 – 1987 main courtroom. 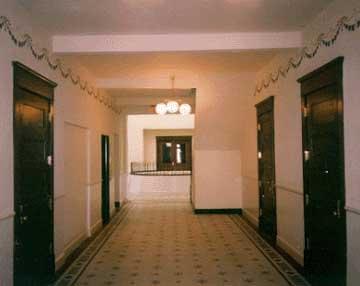 HAUNTED AREAS OF THE BUILDING

Accessed only by elevator.

Agonized screams are heard by employees and visitors — from the poor soul killed by the explosion so long ago.

Located on the First Floor

In the actual 1909 — 1987 criminal courtroom, cold spots are felt by the living and sometimes people feel a presence “brushing” against them. It isn’t known exactly who this presence or presences are, because this courtroom was used for all trials until the new courthouse across the street was opened in 1987. A good guess would be Judge Chillingsworth and his wife, who were mob murder victims, killed in West Palm Beach. Their gangster killers were tried in this courtroom. Judge Chillingsworth would initially want to have front row seats to see his killers trial and conviction. Why he may still haunt it is not known. Perhaps he was killed before he had finished his work in court.

The Room where Indian Artifacts are now on display —

Located on the First Floor.

There are manifestations experienced from cold spots to malfunctioning lights. Nothing much is known about the history of this room.

The apparition of a Lady dressed in white has been seen by many people in these areas.

In 1886, this area was a courtroom where the bodies of the Mann brothers were on display for several days.

The feeling of sadness along with the cold spots and the actual apparitions of the brothers themselves have been witnessed by the living, points to the brothers who may not have killed the Marshall in the first place. They were not ready to leave their lives so abruptly, in such a terrifying manner; to be grabbed and hung by an angry mob.

Yes, observations of the living point to the existence of entities in the building. 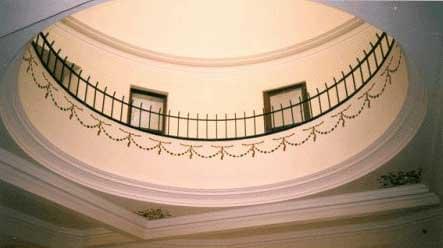