Apparently, spirits who enjoyed former existing hotels have moved in for free! 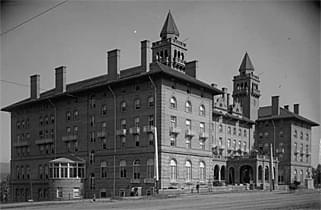 The current modern structure, which is called Antlers Hilton, is the third building which has housed the continuously open Antlers Hotel establishment over the years. It has 13 floors, 292 rooms with all the modern conveniences, and is the only full service hotel located downtown. The rooms located on the backside of the 13 floored hotel, have a glorious view of snow-covered Pike’s Peak. The lobby, beautifully built using marble and wood, leads to both the hotel’s Judge Baldwins bar and restaurant and the conference rooms, which business guests really appreciate. Down the connected hall attached to the hotel is a micro-brewery and other offerings pleasing to the hotel’s guests. 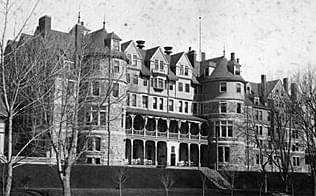 The founder of Colorado Springs, General William Palmer was the one to build the original Antler’s Hotel in 1883, described as being a five story stone and frame structure, complete with dormers, bays and half-round towers on either side of a wood porch with a balcony and stairs.(Top left) It was designed by Frederick Hill Meserve, to be a high class hotel to host wealthy European and East Coast people attracted to the beautiful scenery of the Pikes Peak region. The railroad brought people on holiday, especially from Great Britain to enjoy the mild climate and the activities of a growing resort industry.

Unfortunately, in 1885, this original hotel burned. A new, grander hotel was built to replace it. During the 1890s and through 1917, Colorado Springs entered its golden years, becoming a thriving financial center as well as a place to enjoy the beautiful scenery. The Antlers Hotel evolved as well, becoming bigger and grander. By 1910, it had gone through a face lift, losing the half-round towers and becoming more rectangular, in order to hold more rooms. The two bell towers were left intact. 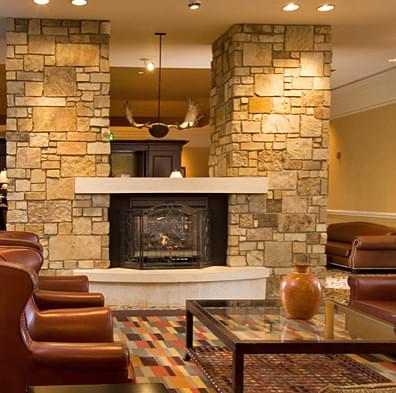 This grand building looks like it would’ve stood forever. Though it continuously served as a hotel throughout the 20th century, it was sold in 1968. Unfortunately, there wasn’t a historical society to fight to save it and it wasn’t put on the historic places list, leaving it open to the whims of progress which had caused the tearing down of other historical buildings, a practice which was popular in the 1960s and 1970s. In 1969, this magnificent yet old building was torn down to make way for the current 13 floored, 292 room hotel.

In 1990, The Antlers Hotel was probably sold once again and completely renovated, becoming part of an expansion of the Palmer Center complex, keeping the antique pieces inherited from earlier versions of this hotel. It was run well by Doubletree offering a perfect place to stay for business, with comfortable beds, friendly staff, and being reasonable in price.

In 1998, The Antlers Hotel was sold once again because of the financial troubles of its parent company due to a law suit. Adam’s Mark bought it for 35.4 million dollars, becoming Antlers Adam’s Mark on Cascade. 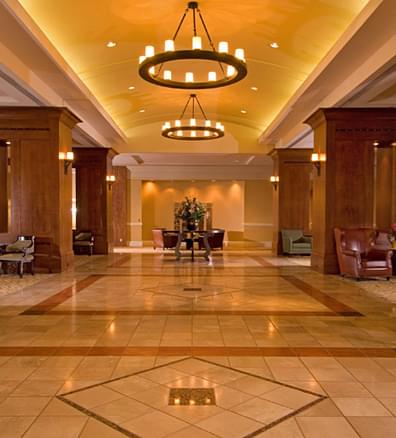 It is interesting to observe that the Antlers Hotel went through some major renovations and two complete tear downs, and rebuilding process in its evolvement as a hotel. These kinds of changes have a tendency to activate the spirits hanging around, who may be haunting the land as well as the establishment.

In the 1970s, a young, high school girl killed herself here during her school’s prom night.

The Antlers has at least three entities who are staying as guests in the Antlers Hilton.

A male entity chills out after hours in the handsome, wood-filled bar, called the Judge Baldwins Bar.

A female entity dressed in a long gown, dressed up for a special evening has been spotted by the living, making her way down a back flight of stairs.

The entity of a young girl lingers in some of the rooms.

These entities are quiet, keep to themselves, and don’t bother the living, as not much is reported about their activities/manifestations. They are probably were all guests of the Hotel, used to sharing the building as guests. 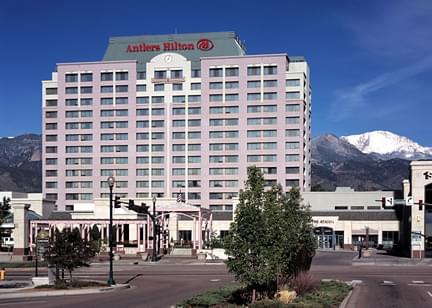 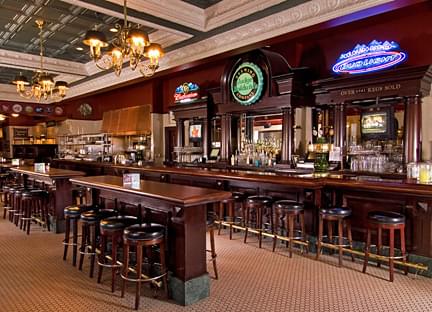 Antlers Hilton can be found in the heart of downtown Colorado Springs, an easy walk to a library, nice shops and restaurants. The building is set back from the street and has a nice green park-like area in front of the hotel.