Spirits of a well-known outlaw and his squeeze are still vacationing here.

A past guest who unexpectedly died here is bitter and angry!

The St. James Hotel, which is the only surviving antebellum riverfront hotel in Selma, was built in 1837, making it one of the oldest hotels still up and running in Alabama. In 1997, this fine old lady was completely renovated and meticulously restored, keeping its old Southern and historical charm, while adding modern perks to please 21st century guests. It has 42 guest rooms and suites, many with glorious views of the Alabama River or the majestic courtyard. Four Riverview suites have “private, wrought-iron balconies, whirlpool tubs and gas-burning fireplaces.”

There are two restaurants to choose from. The Troup House Restaurant, for elegant, fine dining, offers traditional Southern cooking. For more informal, casual meals, one can go to the St. James Drinking Room, which also offers contemporary music and a wide-screen TV.

For special events, meetings, both large and small, the St. James Hotel can accommodate, offering two rooms. The elegant Brantly Ballroom, which opens up onto the Alabama River Terrace, is used for formal affairs, receptions or other large gatherings of up to 200 people.

For smaller events or meetings, the Old Bridge Room is the perfect size for 20-35 people. 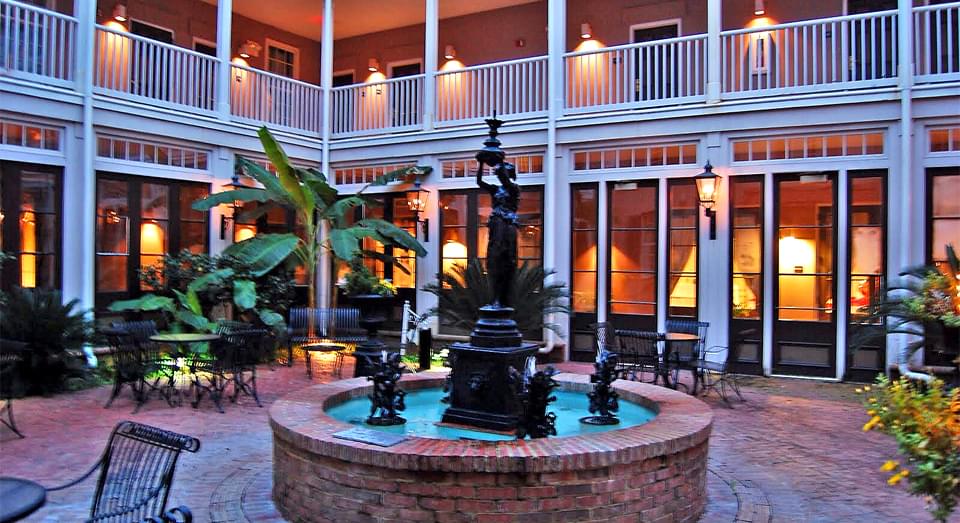 The St. James Hotel was originally called The Brantly, a name it operated under for its first 50 years of being a place to rest and unwind, becoming a home away from home for visiting plantation owners, business men and some other less than upstanding citizens on occasion. During the Civil War years, this fine hotel became the headquarters of the Union forces during the Battle of Selma; becoming the home of Union occupation forces in what was left of the city afterwards. Unfortunately, most of the city was burned because of the high number of Confederate arsenals and factories. Luckily, this hotel and some of the other buildings on Water Street were spared a fiery end. 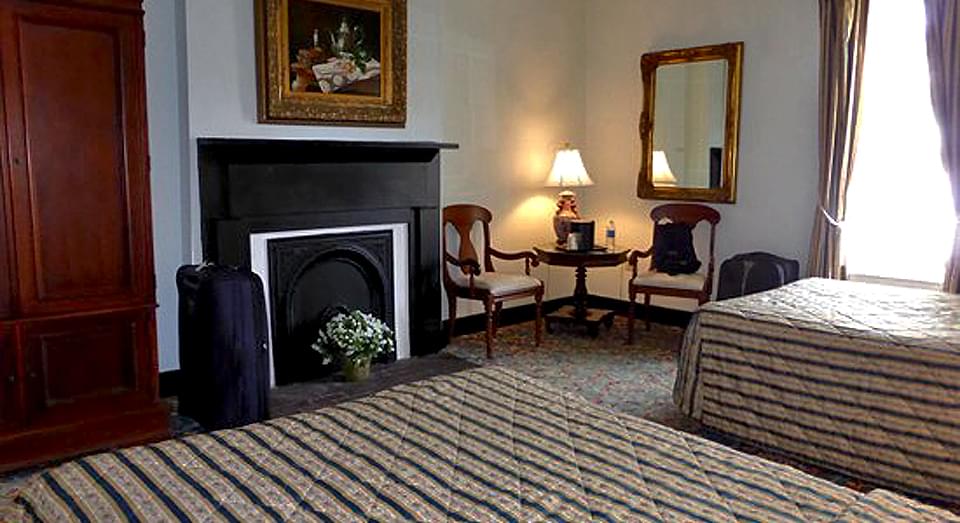 After the war, the hotel was run and operated by Benjamin Sterling Tower, an African American who was the first black man ever elected to Congress. In 1881, famous outlaws, Frank and Jesse James and their gang, took a break from robbing people and decided to take a holiday in Selma, Alabama, staying at The Brantly, developing a fondness for the place. During this time, the hotel was more of a tavern, and one could rent a room on a longtime basis, like an apartment.

Around 1892, the hotel went down hill, hit hard financial times and closed its doors for 100 years. In the 1990s, a group of investors and the community of Selma began a 6 million restoration effort which was completed in 1997. The hotel was returned to its original splendor, and opened its doors with a new name, The St. James Hotel, becoming the highlight of the restored old historic section.

According to the Library of Congress, there are at least three known entities who still enjoy their favorite hotel.

A male apparition dressed in 1880 cowboy threads, complete with spurs has been seen coming out of upstairs guest rooms 214, 314, and 315.

Jesse has been spotted in the bar as well. Employees have seen him sitting at his favorite corner table, which is left of the bar.

Her picture hangs downstairs. Her entity has been described as being that of a tall, beautiful, black-haired woman with a calm demeanor, who has a lavender scent. She floats around the hotel, sometimes stopping merely to look at the living.

Has been heard running around the upstairs, barking. It is thought to be the canine companion of Jesse James.

Odd, unexplainable sounds have been heard coming from the courtyard when no one living was there.

The sound of barking dogs have been heard, coming from the courtyard when no dogs were there.

Apparitions have been seen by psychics standing around the courtyard, dressed in 1800s clothing, socializing, unaware of the living.

Room 304 – A new cook stayed here until he found an apartment.

The cook observed flashes of light repeatedly coming through his room’s window. The curtains in his room would move by themselves without any help from the wind or from the cook himself.

A psychic had a conversation with an angry apparition, mad because he had died before finishing what he had to do.

An entity started to clang together the glasses behind the bar. This behavior stopped when an employee yelled at this mischievous spirit to stop it.

A disembodied male’s voice was heard by the manager and some employees at the same time, while walking through the room.

A psychic research team did some EVP recording in this room, asking “Is anyone there?” When playing back the tape, a scratchy voice of an older man said, ‘Well, that’s a stupid question.”

Alabama Foundation For Paranormal Research conducted some investigations, including recording some EVPs and found evidence of entities in the hotel. 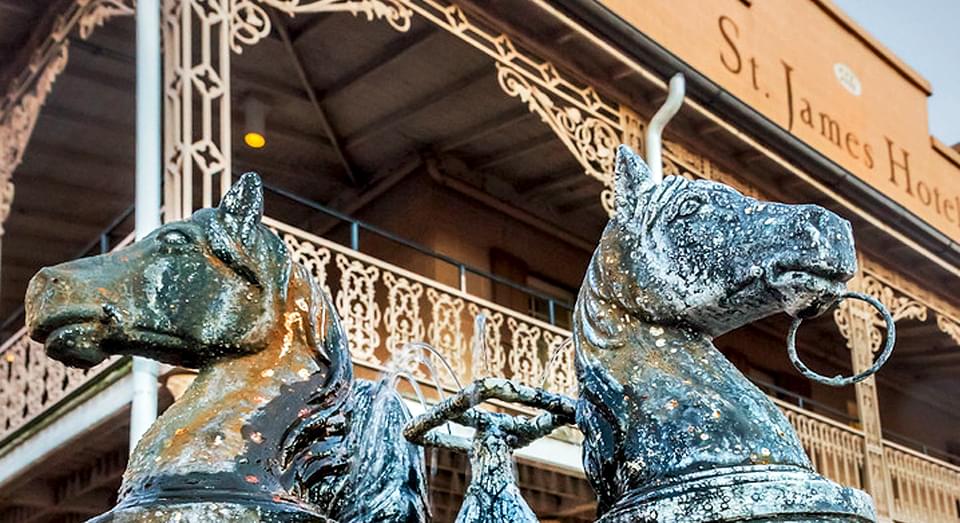 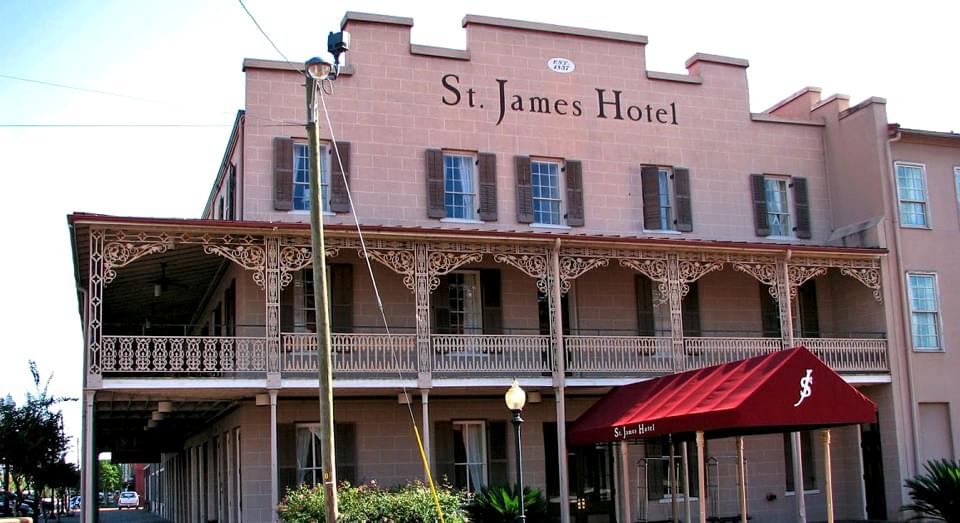 The St. James can be found in the heart of Selma’s revitalized historic district, on the banks which have a fantastic view of the Alabama River as well as the city of Selma itself.