It is described on this NHL form as being a “three-story frame commercial building with flat roof, cornice line between the second and third floors, and simple bracketing that projects from above the third floor.”

“It has double beveled shiplap, plywood, lattice and vertical post siding. A three-quarter round turret projects from above the first floor, above which is an octagonal, wood-shingled, onion-shaped dome.”

This three storied building with a golden onion-shaped dome still sits proudly on 3rd and Broadway. It is no longer a hotel, as many businesses have made their home here since 2002.

It is now home to Frontier Excursions & Adventures, an Alaska-based tour operator who uses the whole building as there must be many travel opportunities in Alaska and other parts of the country and the world.

The original Golden North Hotel was a two story building that was located on the corner of 3rd and State Street. It had an onion-shaped gold dome on top of the second floor It was built during the Alaskan gold rush years; in 1898 by the Klondike Trading Company.

The beautiful dome is done in a Russian or Slavic design, courtesy of an unnamed Montana carpenter. It’s unusual appearance was a way to advertise their business to illiterate gold rush participants, folks who were either lacked or were denied an education for one reason or another.

It was a trading post, offering goods and merchandise in exchange for gold or furs, etc. for trappers, local folks and gold prospectors as well. After the Alaskan Gold Rush petered out, the U.S. Army leased the building for their barracks.

By the turn of the century, new prospective patrons emerged as there were homesteaders coming to Skagway to start a new life here. In 1908, the Klondike Trading Company, no longer finding it profitable to stay in business, sold this building to George Dedman and his partner Edward Foreman, who saw the opportunity to serve these new travelers.

Dedman and Foreman bought the two story building and moved it one block to the southwest corner of 3rd and Broadway. They built a third floor made complete by the original building’s golden dome.

This original onion-shaped dome had a practical use for these new owners with their new business. Many of their would be guests couldn’t read, and this dome would tell them where The Golden North Hotel was located.

In 2002, The Golden North Hotel returned to its original use; as commercial building, becoming the new home for businesses in Skagway. A descendant of either George Dedman or Edward Foreman had his camera shop in one of the rooms.

As of 2019, Frontier Excursions & Adventures have moved inside, using most of the rooms in this historic building.

People who unexpectedly die before they can complete an important event, goal or project, sometimes remain in this world still wanting to complete their unfinished business in however they can. Women who wait for the return of their beloved and die before it happens, still like to hang around the intended meeting place in spirit form, in case the beloved shows up late.

Magnolia Place building, PA (Magnolia was the daughter of the hotel owner. During the Civil War, her father joined the Union forces. She found a wounded Confederate soldier and hid him in the shed, nursing him back to health. They became lovers, pledging their love for each other. He promised to come back and marry her after the war. He was killed when he went back to his unit. She remained single and waited for him. She waits still today).

Jean Bonnet Inn, PA (During the Revolutionary War, the young wife of an officer waited here for his return. He never made it back and she still waits as a spirit).

The Wayside Inn, MA (A female former owner waits patiently for her beloved to return, even as a spirit).

The Golden North Hotel, AK (A young woman and her fiancé, “Klondike Ike,” came to Skagway so he could go prospecting in the gold fields of Alaska. When he had found enough gold, he would return to her with the plan of buying a homestead and getting married. She waited in this hotel for his return for a long time. She had locked herself in her room, afraid of the local ruffians who had been bothering her. She only came out for meals).

(When the hotel staff hadn’t seen her for a time, they opened her room and found her dead from pneumonia on her bed, dressed in her wedding clothes. Her beloved must have died in the gold fields from disease, accident, or foul play because he never returned. Law enforcement at this time left much to be desired).

The Spirit of Young Woman was named Mary by the staff of the hotel when it was still open for business. Mary still waits and interacts pleasantly with the living. Rooms 23 and 14 are her favorite haunts. She also traveled on the other floors of rooms and hallways. Room 23 was located on the third floor in the northwest corner of the building, while Room 14 was (presumably) on the second floor. All of her activity listed below happened when The Golden North Hotel was still in business.

The living have felt cold breezes that are there one minute but gone the next, as the unseen presence of Mary streams by, perhaps dressed in white, her wedding dress.

Sometimes she is seen; if only for a moment.

Other guests had reported that after waking up, they would see the transparent form of a female spirit person hovering above them, looking intently to be sure that they were breathing, or perhaps to make sure, if they were female, that her man wasn’t in bed with them.

The owner and one of the maids together saw Mary standing by the window in Room 23, looking outside.

The hotel’s guest singer from Juneau had his girl friend take his picture while standing in the then empty third floor Hall.

Imagine his surprise that the developed picture showed a detailed apparition of a young woman, known as Mary, standing right next to him.

Other people visiting room 23 had felt the sensation of being choked, as if they were suffering from pneumonia.

While staying in Room 14, some hotel guests had felt really sick, to the point of almost passing out.

Then, a grayish light form appeared to them, and gradually faded away.

During The Golden North Hotel’s inn days, from 1898-2002, owners, staff and guests had plenty of personal experiences with Mary.

Paranormal investigators used to flock here to have a personal experience with her and/or try to prove that the female spirit, Mary, was still waiting. They not only had personal experiences, but caught some hard evidence as well.

The next morning, they found a ring around the tub, that wasn’t there the night before, as if some unseen entity had taken a bath. They had not used the tub at all.

Apparently, Mary felt at ease with them, and borrowed their tub.

If there is a second spirit person in Room 14, he or she hasn’t been identified by a medium or a paranormal investigation group.

Probably so. If the people who work here have accepted her as part of the building, she may still be here.

In most cases that are described on our hauntedhouses.com website, spirits who wait for their loved ones to return are determined to stay in case they actually appear. Unless Mary was helped to the other side, she is probably still there.

She has the ability to see what her rooms looked like when she was alive, if she thinks about it, and doesn’t have to see the current office decorum. Spirits see what they want to see.

The spirit of Mary is patient indeed! While waiting through the years, she has found ways to be helpful, assure herself despite her own insecurities, amuse herself, and even use the facilities.

When she chooses to see the rooms as they are now, I bet she enjoys perusing the shops located in the building, and looking at travel material and photos as well, especially in her old rooms.

It is hard to tell though whether she is still here, because the building has been a commercial enterprise for eighteen years now, and is usually shut during the evening and early hours of the morning. Of course, no ghost paranormal groups are allowed inside anymore. No reports of new manifestations of Mary have been allowed out of the building.

It is possible that a private investigation was held to confirm her presence and that it resulted in a medium being brought in to help Mary on her way to her beloved in the spirit world.

If the spirit of Mary was interacting with them during business hours with her usual manifestations (or new ones she came up with), this paranormal activity could easily scare the people working here. It would be tough keeping employees or businesses as tenants here if they were constantly being scared or startled.

The Golden North Hotel building is located in the heart of historic Skagway, Alaska, on the corner of 3rd and Broadway. 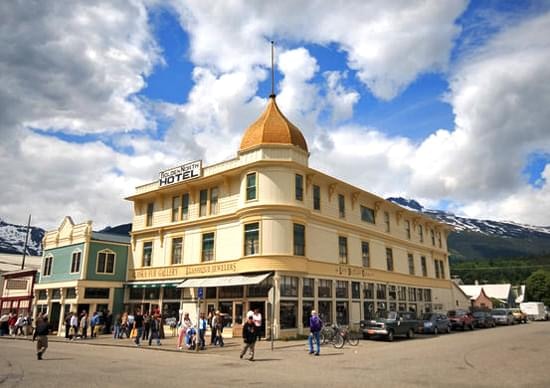