Skip to content
More From Milwaukee More From Wisconsin

Death in the basement here long ago created spectral activity…

A haunting of the land under the building has caused activity.

Spirits of past patrons still visit!

Oh My! The atmosphere of this place knocks the socks off! Stepping inside this genuine, 1920s high class, authentic bar feels like we just stepped back into time during the 1920s’ and 1930s’. None of the architecture or antiques/antiquities are original. For example, the tin ceiling originally came from the torn down Plankinton Mansion.

The beautiful long bars and much of the rich, dark woodwork were all brought in to recreate an upscale bar with class and elegance from the 1920 through the 1930s’ era; making Shakers Cigar Bar more beautiful than it ever originally was in reality.

There is the front part of the first floor that is the bar area for smoking and drinking. Shaker’s Bar prides itself on its many vintage brown spirits and wines, even Absinthe, to go along with its fine offering of cigars. 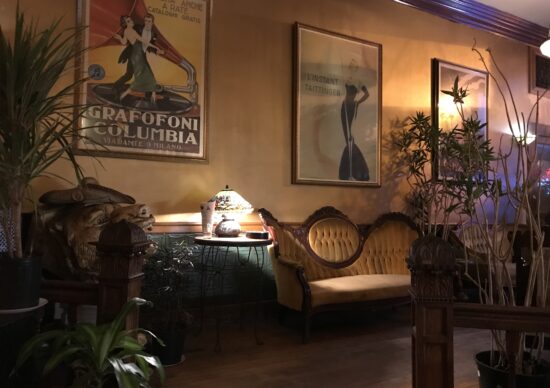 Death in the Absinthe cocktails are made of Prosecco, European Absinthe and their own proprietary bitters in their own sugar cubes.

Shaker’s Cigar Bar have an outside source brew their name brand beer, such as Shakers Ghost Ale, and Shadow People Lager.

The back part of the first floor is the cafe-style, restaurant area that also has a wooden bar, lovely wooden tables, with large mirrors on the west and east wall. There is also outside dining area.

The front part of the first floor is the Cigar and Drink Bar.

Sometime after the current owner, Bob Weiss, bought this business, the whole third floor area was turned into the Shakers Penthouse, right in a hotspot of paranormal activity.

For 365.00 a night, guests could try to stay in the heart of the old brothel and hopefully experience the paranormal activity from a mischievous young female spirit who met a bad end and was entombed there. The Penthouse as of 2019 has been closed probably for remodeling.

Bob Weiss has branched out running other tours in other places. Visit their website to get more information.

This four story structure along with a row of buildings was built on land that once was a cemetery with an orchard behind it in 1894. It was designed to be a Schlitz Brewery cooperage house. This was the place where Schlitz had its huge wooden barrels built that were used for brewing beer, and then for transporting Milwaukee’s favorite form of alcohol; beer!

In 1905, this building was put back on the real estate market and was sold to be used as a distribution center, which makes sense being in the Warehouse District.

In 1922, fifteen years later, Al Capon bought the building to set up one of his Milwaukee Speakeasies. Another one of his Speakeasies was set up in Brumder Mansion. The legal business was supposedly “The ABC Soda Company,” that was pretending to be bottling innocent Soda Pop. Not! They were in reality putting imported booze from Canada, brought over Lake Michigan in Beer Barrels.

In the back was the Speakeasy run by Mob enforcers, not known for their forgiving nature. This Speakeasy was the full sports package, that included illegal booze, gambling in the basement,and the ladies of course in a large brothel located on the second and third floors.

These prostitutes were all teenage girls, being young and beautiful -sure to be irresistible to clients of the Speakeasy.

Using underage girls was common in Prohibition Speakeasies in Milwaukee. As Milwaukee has long been a favorite place for conventions, this brothel was active until 1945.

Throughout the years many Bar establishments were open for business at this location, providing beer and drinks to local workers who were employed by businesses in the Warehouse District.

The Shakers Cigar Bar came into being when it was bought in 1986 by Bob Weiss, who soon learned that the building was already occupied by spirits with connections to the building: Some were mischievous, some friendly, and some were surly or grumpy when disturbed.

“When I opened up in 1986, almost out of the gate we had contractors – otherwise rational people – starting to talk about their experiences here. The staff, again almost out of the gate, had talked about things taking place,” said owner Bob Weiss. “You can talk to any of the staff and they’ve got myriad experiences that are as fresh as yesterday or last week that take place.”

Friday and Saturday nights are hopping! Patrons partake in the bar’s “island-inspired fare, absinthe and prohibition-era cocktails and the popular and also take the entertaining ‘ghost tours’.”

“Most Fridays and Saturdays we do five or six tours,” said Weiss. “I suppose it’s easy to paint this as some sort of charlatanism, but there’s no strings attached. It’s not a Disney ride; we don’t dummy anything up, and there’s not anyone jumping out at you. It’s all authentic, historical things that can all be documented.” 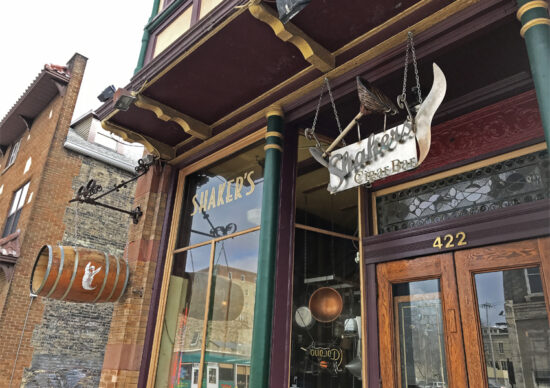 Bob Weiss and his team did some research to find out the identities of some of the resident spirits, and the causes of their deaths.

It is a bad idea to build on top of a cemetery or graves; when they constructed this 1894 building, a graveyard was already there, so they just built on top of it without removing the remains. The Spirits from this graveyard are not very happy with the living. 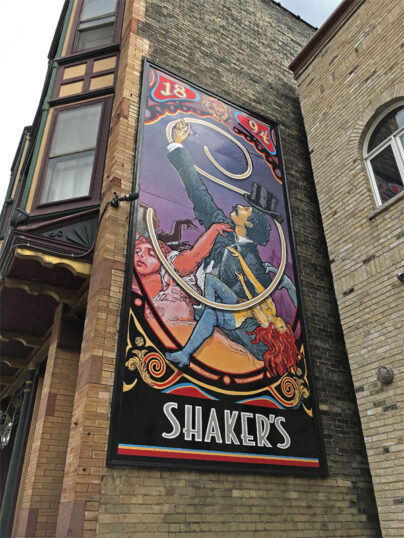 Spirits who are connected to land before anything is built on it, sometimes will move into the new structure that is constructed on it.

There was an apple orchard located behind the graveyard before construction of the Shaker Cigar Bar took place. A young girl fell from a tree and broke her neck and died.

Prostitution has long been in a risky profession. Women in this profession who were murdered often are restless , wanting justice and perhaps afraid to go to the other side.

One 16 year old teen prostitute was brutally hacked to death by a disgruntled perhaps jealous client, who himself may have wound up in Lake Michigan wearing cement shoes. Or she could of offended a mobster with a temper issue.

Speakeasies where the mob hung out or where enforcers hired by the mob were in charge of security, deaths that happened in these illegal bars/brothels/gambling joints were sometimes done by a rival gang or because of misbehavior of a speakeasy guest.

At least two men were killed in the basement; one over a card game.

People who enjoyed an establishment while alive, sometimes don’t let being in Spirit-form get in the way of still enjoying their favorite spot as well as they can without a body.

“Ghosts, Shadow People, full apparitions, extreme sudden cold, a fog over your head, the sensation of the building swaying, a sensation of imminent harm, voices, knocking, doors opening/locking, faucets turning on, lights coming on, going off—that’s just for starts… I have over 30 years of stories. Come take my tours.”

Spirit of young Elizabeth – died after falling out of a tree.

Her apparition has been seen in the bathroom several times.

She gets her chuckles by knocking on the stall doors, giving the occupants a fright.

Some women in the stalls have seen a pair of a girls legs with 19th Century shoes on the feet.

This spirit likes to enjoy the Penthouse, when she isn’t restless from being murdered.

She may try to communicate with the living who rent the room hoping for a paranormal experience.

Better be careful what you wish for, you just might get it.

She may turn the lights on and off, play with the TV, speak to them, touch them, move items, or doing anything to let the guests know that she is there. She could be lonely, wanting attention or may cry

Many scared guests have turned in the key after spending just an hour and a half in the penthouse.

Spirits in the basement:

Seem to be territorial of this space but have some fun at the expense of the living. Enjoy the parlor games, like devining rods and recorders that pick up EVPS.

Beer delivery folks and some Federal Officers have picked up on the heavy negative energy there that gives off a strong uncomfortable feeling of not being wanted.

When the Beer Delivery man came to drop off the beer in the basement and collect the empty bottles in the basement, he became scared and high-tailed it back up the steps after delivering the beer.

One female tour participant saw this spirit for a minute in the basement.

This spirit is thought to be the one who cooperates with tour guides and works the divining rods, saying yes or no.

Apparently the staff have all had experiences with spirits who still are enjoying Shakers Cigar Bar.

There have been boatloads of experiences reported at this location by patrons, penthouse guests and the staff and owner of this fine establishment. 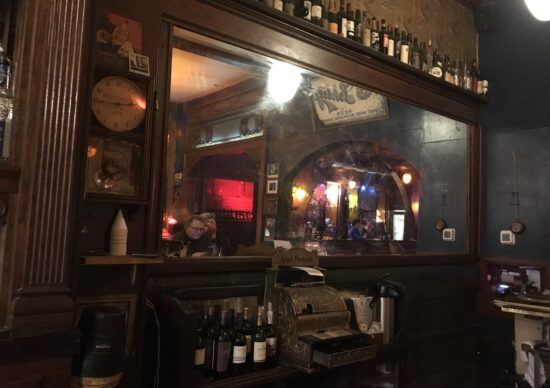 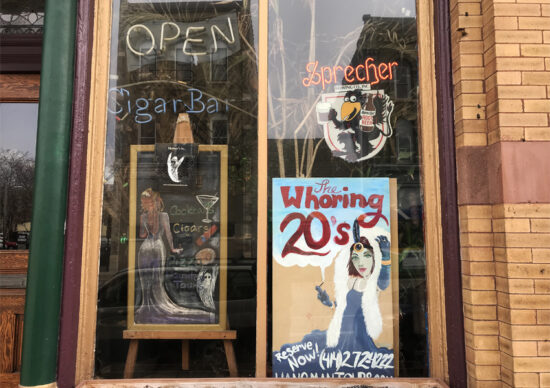 Haunts in Milwaukee Haunts in Wisconsin