Apparently the original owners, their guests and
a grumpy servant cause paranormal activity. 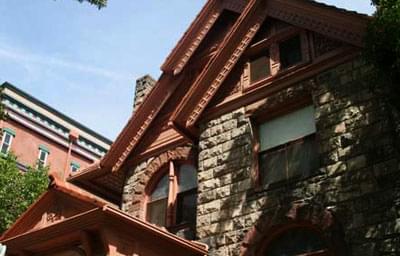 This beautiful 1889 red sand and gray Rhyolite stone, 7,000 square ft Victorian is three stories, with the usual attic and basement. Its claim to fame is that Molly and her husband James Joseph Brown bought this mansion in 1894. Margaret Tobin Brown, i.e. Molly Brown, was traveling on The Titanic luxury liner when it hit an iceberg and sank in 1912, and lived to tell about it. After her life boat was picked up she began to take care of the survivors in the most dynamic ways. She became a national heroine, which inspired a Broadway show in the 1960s, “The Unsinkable Molly Brown.” This show jogged the memories of the people in Denver about all the accomplishments of this amazing woman and created a desire to save this home from the wrecking ball.

The Molly Brown House was the result of combining the styles of Classic Queen Anne, Richardsonian Romanesque and refined neoclassical to create a unique and “eclectic” home. It was an inspiring idea to use the combination of gray rhyolite stone and red sand stone as the building materials, as the combination of the two types of stones produced a stunning home. Stained glass windows, ornamental wood panels and curved brackets were added to create a lavish appearance

The home was considered an upper-class home, but not on the scale of being a luxurious mansion of the extremely wealthy, although it did have some nice bells and whistles which the normal person didn’t have. The home came with “electric lights, a telephone, indoor plumbing (including one indoor bathroom with hot and cold running water), and forced heat and air.”

On the first floor, one found a formal parlor, dining room and sunroom used for entertaining important guests. There was also a family parlor and library where the Brown family played, read and relaxed together. The house also had a “large, very modern kitchen complete with both a butler’s pantry and a cook’s pantry.”

On the second floor, each Brown family member had their own room, with a room left over for Molly’s parents. The third floor housed the female maids while the male servants stayed on the second floor of the carriage house.

Molly and J.J., like homeowners have done throughout time, made some additions to their home! They added the handsome stone retaining wall separating the lawn from the sidewalk. Wanting a bigger carriage house, they doubled its size. For practical reasons, the Browns made two useable year-round rooms out of two wooden porches found at back of the house by enclosing them with bricks. Molly switched the location of the family parlor and library. She replaced the original plain, grand staircase with a more impressive one and extended it from the second floor to the third.

Molly loved to travel and brought back some art, like two Egyptian Phoenixes which she put in the front of her house. 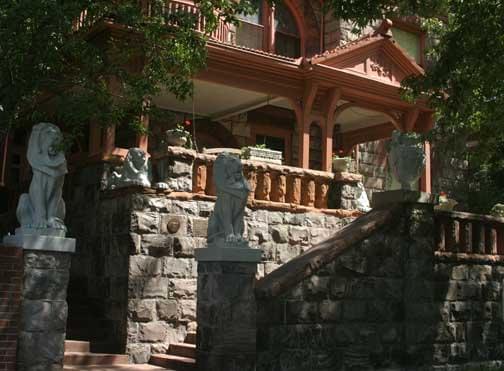 Margaret Tobin Brown was born into a hard-working blue collar family with 6 children. She learned many values about the importance of hard work and education. After moving to Leadville, she worked at a goods store while living with her brother, with the dream of marrying a rich man so she could help her family. At a church picnic she met James Joseph “J.J.” Brown, a poor man but was the love of her life, so she changed her dream and married for love in 1886.

They moved closer to the lead mine where J.J. worked and lived in a two room log cabin. Molly hired tutors to continue her education by studying reading and literature & music. The Irish maid they hired also studied with Molly, a practice which Molly continued of always including the servants in her own tutoring sessions. By 1889, Molly and J.J. had two children, were living back in Leadville in a nice house with nearly all the Tobin clan living nearby. These were the happiest years of Molly’s life.

J.J. was making good money being in charge of the many mining operations of Ibex Mining Company, because of his hard work, and business sense. The purchase of Little Johnny Mine, brought a huge change in their financial fortunes. A large vein of gold was discovered in this mine. “The grade of gold was so pure and the vein so wide it was heralded as the world’s richest gold strike. By October 29, 1893, the Little Johnny was shipping 135 tons of gold per day.” This gold strike revitalized the mining industry in Leadville.

The Brown family moved to Denver and bought this 1889 Victorian Mansion, which was built by “renowned” architect William Lang who was hired by Isaac and Mary Large to do so. 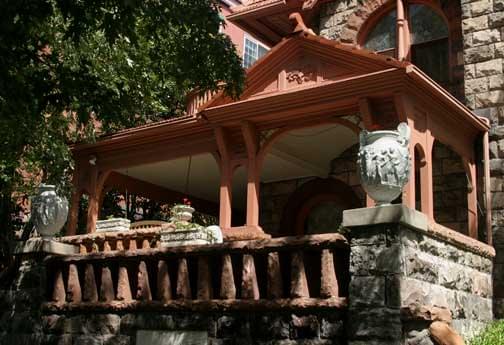 Molly and J.J. were giving people and shared their money with charities and did a lot of good works in both Leadville and Denver. This was just the beginning of her life of serving others less fortunate, for she believed that money was a tool for helping others. By the end of her life, Margaret’s life of ‘humanitarian and philanthropic service and her never-ending spirit were well recognized.”

Her marriage ended with J.J. in 1909 but they remained friends. It was hard for J.J. to be married to such a dynamo. She became active in social causes like raising money for a juvenile justice system, became involved in the Red Cross, went over to France during WWI and helped the people there through an organization called the American Committee for Devastated France.

When the marriage ended, Molly Brown spent less and less time in Denver and decided to rent out their house to various families for many years until the Great Depression, when she was forced to turn the house into a boarding facility. By the time she died in 1932, the house was in run-down condition. The owners that followed substantially altered the home to create 12 separate spaces for renters.

In 1958 Art Leisenring bought the house and ran a gentleman’s boarding house for two years. He then leased it to the city of Denver who made it a home for wayward girls. By 1970, urban renewal was in full swing, and this home had a date with the wrecking ball. Leisenring formed a Historic Denver Inc. which raised money to save Molly Brown’s House. The house was meticulously restored to its former splendor and was opened as a museum.

The entities of Molly Brown and her husband James John

The entities of Molly Brown and her husband James John still putter around their home, going about their business, doing what they liked to do while alive.

The staff and guests to the museum have smelled pipe and cigar smoke; the tell tale sign that J.J. has been enjoying his smokes again, although there is no smoking allowed for the living.

Cold spots have been felt in Molly Brown’s room and her apparition has been seen by the living as she goes around corners.

The female entity dressed in a Victorian dress

This female apparition dressed in Victorian attire, likes to sit at the dining room table, and has allowed the living to take pictures of her. When feeling energetic, this entity likes to rearrange the chairs which are around this same table.

J. J. and Molly had a daughter named Catherine Ellen who died young, probably of disease.

The window blinds in Catherine Ellen’s room room raise and lower on their own.

The entity of Johanna

The image of the entity of Johanna has been seen in the room’s window.

The entity of a male servant

The entity of a male servant in a grumpy mood has been seen in the mirror hanging near the stairs on the first floor.

5 to 6 entities have moved back into their own home. 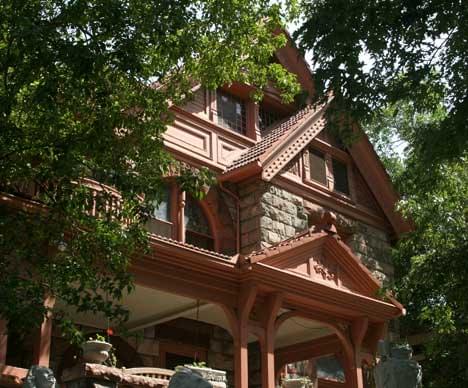 Molly Brown’s house can be found in the fashionable Capitol Hill area, on the corner of Pennsylvania Street and 13th Street.