Skip to content
More From Monterey More From California

The Stokes Adobe building sits on a 21,348 SF lot. The two story adobe itself is 6,051 sq ft. This 1833 structure not only has an outside terrace, solid walls and foundation; built to last centuries, but the original beauty of this upper class adobe has been preserved.

The 1833 Stokes Adobe building has been transformed into a commercial restaurant space, since 1950. However, the original rooms upstairs and the large one room space downstairs still remain the same. Instead of bedrooms upstairs, these rooms were made into another bar, and another dining room.Perhaps, the walls may have been taken down in some of the bedrooms to make larger spaces for the upstairs dining room and bad.

This property was indeed made into several beautiful restaurants, over the years; adding to the beauty of the original adobe. montereycountyweekly.com ; “The bars (upstairs and down) are solid oak. In the dining room rimmed with windows, the wine cellar/curing house behind a picture window was transplanted from elsewhere. The pine board floors have the lovely patina of time and a stippled effect, too, from high heels over the many decades.

The outside front terrace was made into lovely outside dining area, which still has the original palm tree planted so long ago. A redwood tree continues to grow and prosper as well 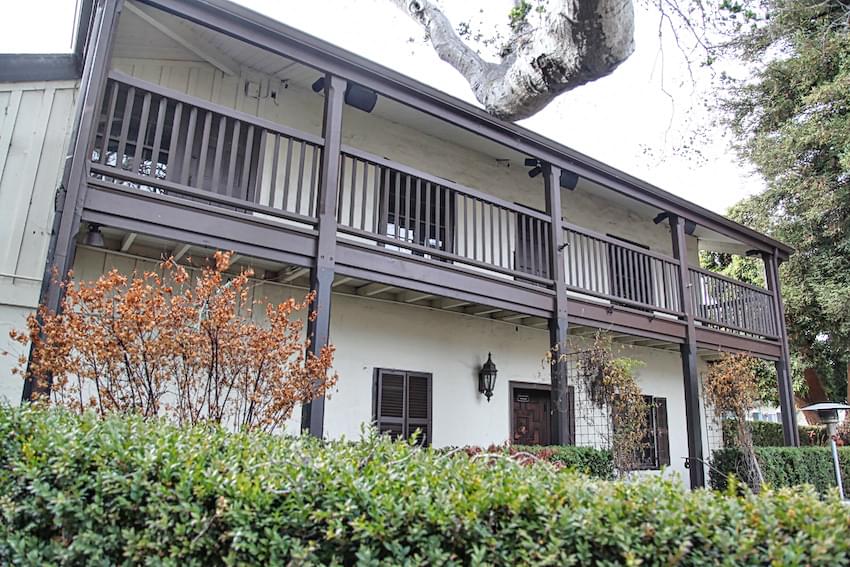 In 1833, the original structure was built for the well-to-do Ambrose Tomlinson who had hired the talented duo, Hoge and Benjamin Day. This finished one room adobe was considered quite pretentious because it was a showcase for Ambrose’s success and wealth. Both inside and outside the workmanship was beautifully done. The cherry on top was the hand-made, red-tile roof. Needless to say, Ambrose Tomlinson was very happy indeed with the results.

However, just four years later in 1837, Ambrose had a change in fortune and had to sell his forever home. The next owner was James Stokes who was a British Navy deserter. Stokes jumped ship in 1833, carrying a case of medications. He made the fraudulent claim that he was Dr. Stokes and opened up shop as a counterfeit physician and began treating people while not knowing anything about medicine. As a result many of his patients died, including Gov. José Figueroa. A few must of survived his treatments because no one seemed to care about all of his dead patients, and he became rich enough to buy the fine adobe from Ambrose Tomlinson.

He married the widow of one of his dead patients, and had a ready-made family of four children. He and his new wife, Josefa, had two more children. By 1844, the Stoke’s adobe needed more space for such a large family of 8 people. Stokes had seven more rooms and a second floor added to the adobe,in the same high quality way used for the original Tomlinson adobe.The fantastic detailing on the super-thick adobe walls with deeply recessed windows, doors and walk-throughs were all well-done and quite impressive. Haley Jones, in his article for Monterey County Weekly (3/20/2008) also reports;”The wall texture is viscerally satisfying and the ideal surface for the original simple, thin, straight-line designs in thick gold leaf that frame geometric shapes painted in ultra-soft hues of earth and sky.”

James Stokes was Mayor of Monterey for awhile, and hosted many social events like the Cascarone Ball for many years. This use of this property continued on being a social hub, the place to have a social event for the upper crust of society..

Years later, James Stokes sold his forever home to a baker who is given credit for being the first one of changing this private home into both a residence and a commercial business. Perhaps he lived upstairs and turned the downstairs into his bake shop. This idea of living above the business was popular. Another owner had the distinction of printing California’s first newspaper on the first floor. Another owner had a kiln business. The adobe also served as a garrison for officers. 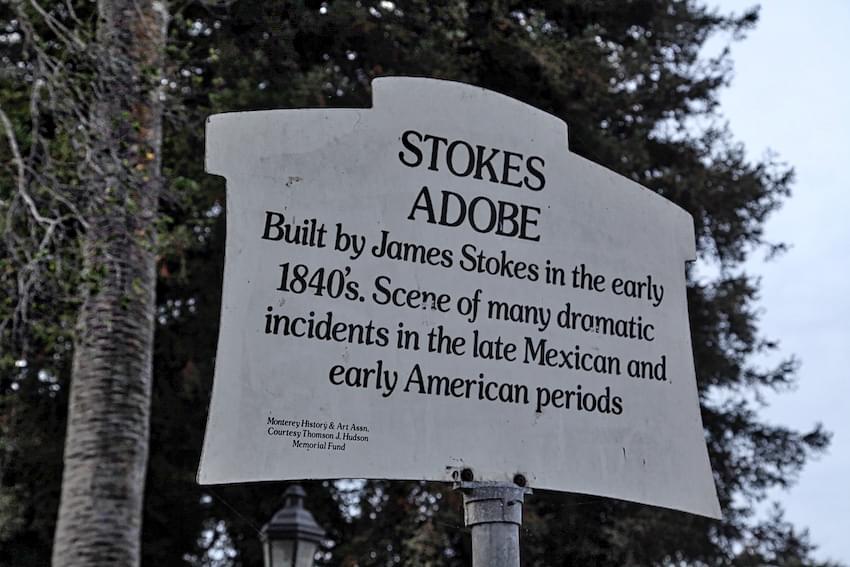 Also, some owners also turned it back into single, family residence, and the adobe was a single family home for a slew of families. In 1890, the last person to use this structure as a personal residence was Socialite Hattie Gragg who enjoyed having social events and parties here. She lived in her forever home until she died in 1948.

In 1950, the adobe had been transformed into a high class restaurant, Gallatin’s, that became very popular in the 1950s; it was “the place” to have meals and hang out for the upper echelons of society; including movie stars and very prominent people. They hosted many social events here. The cuisine was exquisite. “Gallatin’s menu boasted some ambitious, exotic items such as whole roasted wild boar, cream of red abalone soup, and bull’s head minotaur that included “the tongue simmered in spices and the brains and eyes sautéed in butter… crowned with pastry horns and wreaths of gaily colored flowers.”

Stokes Restaurant and Bar opened to the public, is reported to have a fine wine list, and tasty american cuisine foods in their small plate offerings. They closed in November of 2008.

In 2008, The Stokes Adobe property, former home of a restaurant with 3 years left on the current lease, this property was put back on the real estate market. It was physically described in an article on the website, montereycountyweekly.com ; “The bars (upstairs and down) are solid oak. In the dining room rimmed with windows, the wine cellar/curing house behind a picture window was transplanted from elsewhere. The pine board floors have the lovely patina of time and a stippled effect, too, from high heels over the many decades. These days, everything about Stokes Adobe is very comforting, welcoming and hail-fellow-well-met.”

In 2011, a new restaurant was opened here, called 1833. It was well received and did very well as a casual elegance establishment. it’s parent company was Coastal Luxury Management.”Restaurant 1833 brought energy in ways the local foodscape hadn’t seen.” 1833 restaurant earned some great achievements while it ws open. The restaurant earned a nationwide James Beard Best New Restaurant nomination, a Robb Report Best of the Best and a 3.5-star review from The San Francisco Chronicle.

In 2017, this property was sold to wine connoisseur Constance Laub, former owner of Constance Wine Bar in Carmel.

“It is that atmosphere that Dexter Salazar, Laub’s collaborator in this project, hopes to bring back to 1833. ‘I would like the vibe to be more Rat Pack, less haunted house,” he says. “Back in the day, with that Sinatra feel, Gallatin’s was the ‘It Place’ to be.’ But Laub adds that the new restaurant won’t be so formal that you have to dress to the nines; ‘casual elegance’ is more the atmosphere she is hoping to achieve. “I’m looking at making it more approachable, an everyday thing, but not by sacrificing its elegance. I just like people to have a nice time with good food and wine.”

“Once paperwork is finalized, there will still be several weeks of regenerating and renewing the space. “I just want to paint and lighten. And I’m looking at hardwood floors upstairs. I’m not planning to change much, but I need to freshen it up,” Laub says.

James Stokes life didn’t end well. He poisoned himself in front of his sons. There are two possible reasons why he did this in this way.

People who are convicted either wrongfully are deservedly because of their supposed or real despicable act and are executed for it, or kill themselves or flee prosecution can be restless as spirit people especially if they have fallen a long way down from who they once were; losing a good name, fortune, family, status, etc.

Perhaps his sons found out his secrets during his later years. Urban legend says that his sons caught him sexually abusing their sister. However, he didn’t sell his adobe until years later and by that time his kids may have been up and out.

Perhaps more likely they found out their dad was a fraud and murderer.

People who suffer a very painful loss sometimes can’t go on without this person; sink into depression and killed themselves. James Stokes’ beloved wife, Josefa died in her upstairs bedroom, leaving James heart-broken.

It could be a combination of the above theories. Perhaps James Stokes blamed himself for his wife’s death and blurted out a confession to his sons that he wasn’t a doctor all these years and had practiced fraudulent medicine. He may have had deep remorse, realizing what he had done to other patients who died under his care. Perhaps the chickens came home to roost.

People who loved their homes while alive, sometimes come back to visit or reside, especially if their loved one can’t let go. Both James and Josefa Stokes, and Hattie as well loved their forever home.

Former owners of a structure now in spirit sometimes heartily approve of renovation changes or the use of their beloved home in a new way. Other spectral owners have strong disapproval of new changes in either the structure or how their favorite structure is being used. 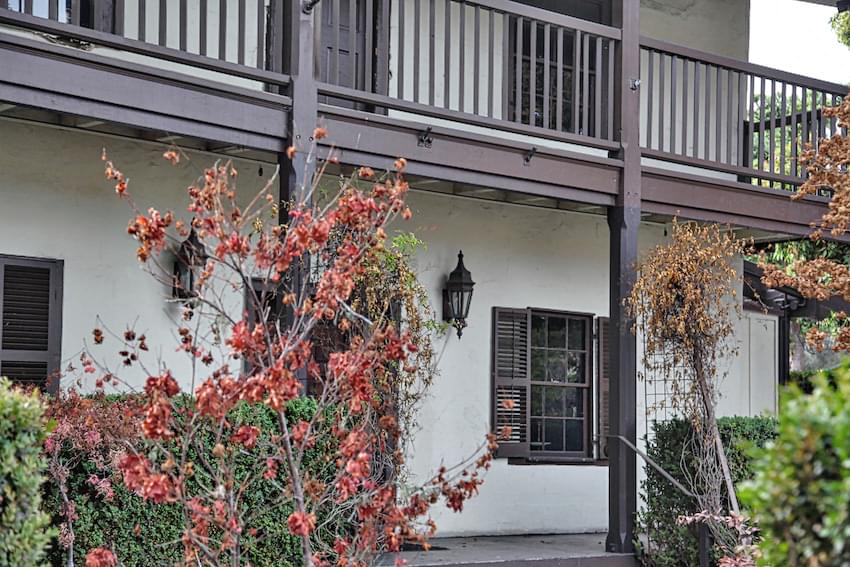 Disgruntled, and rigid; an unhappy, restless soul perhaps seeking the peace he once had here.

He has been seen wandering around the upstairs and downstairs in his white coat, in a restless mood, sometimes going through walls; not very happy.

Spirit of James Stokes shows his displeasure with the staff; either because he doesn’t like having his home fully commercialized, so crowed with people or he perhaps thinks the staff doesn’t do a good enough job.

He has shaken unsuspecting staff and shoved them out of the way as well.

Josefa still enjoys her home remembering her life here, not minding sharing her former room with the living. She perhaps likes the company, having hosted many parties and events here, being the Mayor’s wife.

In her old quarters, the upstairs dining room, staff and patrons have seen her apparition going about her business.

In the rooms she lived in which is the current upstairs dining room, the living have heard multiple women’s voices, the cries of babies, and breaking glass.

While she still enjoys her home, she welcomes having an upscale restaurant, event venue in her cherished home. She loved events and parties while alive.

She probably invites herself to any social events that take place in this space as well.

The ghostly trio of James, Josefa and Hattie created so much activity that renovation workers agreed to a strict buddy system when working at night.

A big Yes Indeed! This true fact that this building has spectral residents with quirks has been published in real estate promotional pieces, showing full disclosure. Many people have experienced the paranormal activity reported above. I wonder if the restaurants in this building had a high turn-over rate because of the attention their staff received; nice and not nice from the spirits who reside here.

The Ghost Trolley of Old Monterey is a family ghost tour of old Monterey led by historians and locals of course has The Stokes Adobe on its list of haunted places in Monterey. 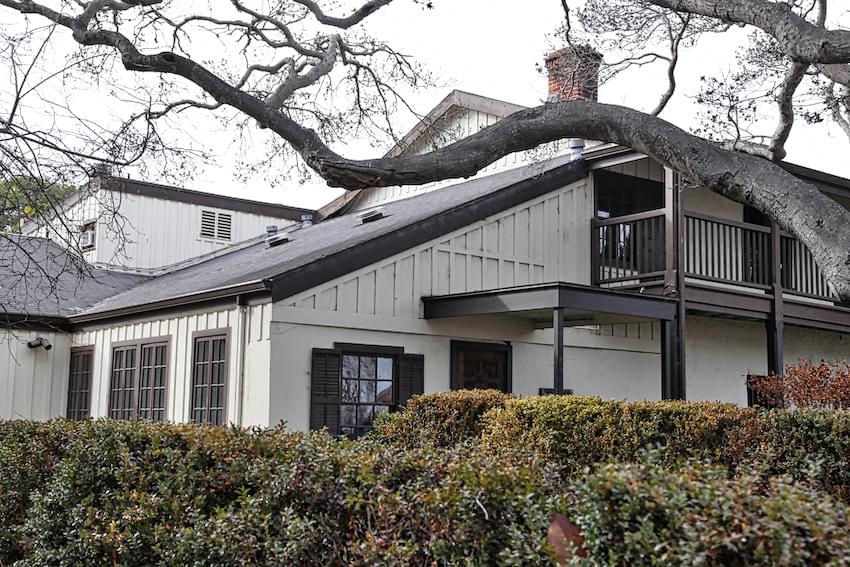 The Stokes Adobe building is located in a historical section of Monterey; near the intersection where Hartnell St, Madison St. and Calleprincipal St. meet.

Haunts in Monterey Haunts in California